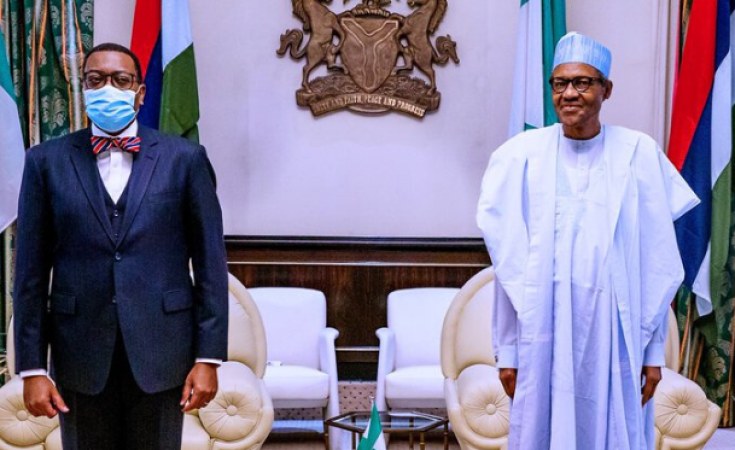 Bayo Omoboriowo | Twitter | Muhammadu Buhari @MBuhari
Africa Development Bank (AfDB) President Akinwumi Adesina made a surprise visit to the State House, Abuja, on Tuesday, June 2nd. At their meeting, the Nigerian president said, "Nigeria will stand solidly behind Dr Akinwumi Adesina in his bid to get re-elected as President of the African Development Bank."
Government of Nigeria (Abuja)
press release

The President spoke at State House, Abuja, Tuesday, while hosting Dr Adesina on a courtesy visit.

“In 2015, when you were to be elected for the first term, I wrote to all African leaders, recommending you for the position. I didn’t say because you were a People’s Democratic Party (PDP) Minister, and I belonged to the All Progressives Congress (APC), so I would withhold my support. I’ll remain consistent with you, because no one has faulted the step I took on behalf of Nigeria,” said President Buhari.

The President pledged that Nigeria would work with all other leaders and stakeholders in AfDB to ensure that Dr Adesina was elected for a second term built on the record of his achievements during his first term.

The African Union had already endorsed the incumbent AfDB President as sole candidate for the continent, but some other stakeholders are trying to ensure that Dr Adesina is re-investigated on some allegations, and rendered ineligible to run.

Giving a background to what was happening in the bank, Dr Adesina, a former Nigerian Minister for Agriculture, said the 16 allegations raised against him were trumped up, “and without facts, evidence, and documents, as required by the rules and regulations of the bank.”

He added that the Ethics Committee of the bank cleared him of all the allegations, and calls for fresh investigation by the United States of America, were against the rules.

“My defense ran into 250 pages, and not a single line was faulted or questioned. The law says that report of the Ethics Committee should be transmitted to the Chairman of Governors of the bank. It was done, and the governors upheld the recommendations. That was the end of the matter, according to the rules. It was only if I was culpable that a fresh investigation could be launched. I was exonerated, and any other investigation would amount to bending the rules of the bank, to arrive at a predetermined conclusion,” Dr Adesina said.

Stressing that the motive was to soil his name, and that of the bank, the AfDB President said he was proud to be Nigerian, and thanked President Buhari for his unflinching support.

“You helped me to get elected in the first place, and you have supported me robustly all along, and the African Union unanimously endorsed my re-election” he declared.

While commiserating with President Buhari on the death of the former Chief of Staff, Mallam Abba Kyari, Dr Adesina described Professor Ibrahim Gambari, new Chief of Staff as “a man of integrity, and of global standing.”

Next Story
Tagged:
Copyright © 2020 Government of Nigeria. All rights reserved. Distributed by AllAfrica Global Media (allAfrica.com). To contact the copyright holder directly for corrections — or for permission to republish or make other authorized use of this material, click here.