Africa Rises in Rage Over George Floyd Death in US 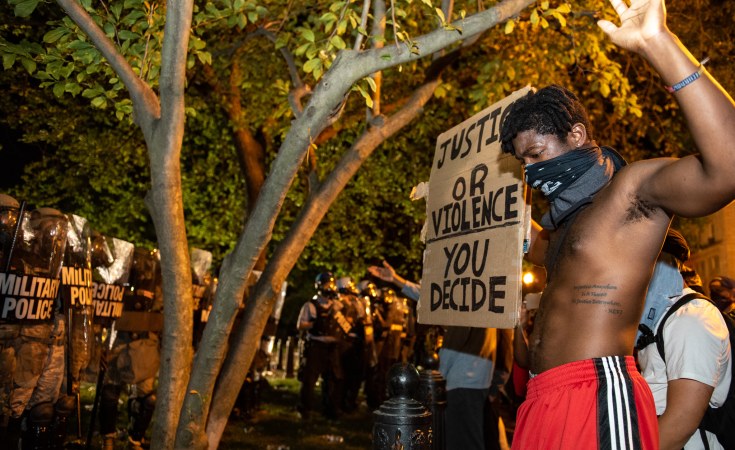 Johanneburg — Officials in Africa have expressed concern over developments in the U.S. following the death of George Floyd, the black American man killed in police custody in the city of Minneapolis last week. The head of the African Union described Floyd's death as an act of "murder," while South Africa's ruling party is calling for calm in the U.S.

Statements from the African continent could portend a shift in global relations — and hopefully, analysts say, make a bigger point: whether you live in Minneapolis or Monrovia, George Floyd's death affects us all.

Minneapolis. Washington. Houston. New York. Detroit. Philadelphia. Atlanta. In recent days, rage in these and other cities over police brutality against black Americans has spread across the United States. But the outrage has also spread to Africa.

Meanwhile, U.S. embassies in Kenya, Uganda, Tanzania and the Democratic Republic of Congo issued rare statements of concern over Floyd's May 25 death and called for accountability after the arrest of a police officer on third-degree murder and manslaughter charges.

Why? Because, in the words of Carine Kaneza Nantulya, Human Rights Watch's Africa advocacy director, George Floyd is all of us.

"This is the eternal struggle of any member of a minority community," she said. "It's going to touch anyone who has had previous experiences of abuse and and oppression, be it because of one's race or religious background, or sexual identity, you name it. And at the same time, it touches me in a way that it is bringing up issues that could be very, very easily forgotten as well. And and I guess the struggle, and I think a challenge for every for every institution like the African Union, for leaders around the world, for organizations like ours, is to find the tools to forge ahead, to move to move ahead and to address some of some of the deeply seated social economic issues that are the trigger factors for this."

For decades, African leaders have publicly chafed at what they view as paternalistic treatment from Western nations. This tragic incident, says Andrews Atta-Asamoah, an Addis Ababa-based researcher for the Institute for Security Studies, could compel the African Union to take the lead.  He spoke to VOA by phone from Pretoria.

"This is a broader issue, and it fits into a broader systemic crisis which the AU can engage the U.S. on, in terms of what needs to be done," he said. "Between the AU and also the diaspora community, I think this is an opportunity for the AU now to begin to emphasize exactly what the African-American community go through on a day-to-day basis."

And, Kaneza Nantulya says, this strong statement from African leadership could also spur citizens across Africa to demand that the AU stand up for them, too. She spoke to VOA on a WhatsApp call from her base in Washington.

"It's important because I think, beyond the United States, it reminds us of what Africans in all their diversity have the legitimacy and the right to ask — not only their government, but also the African Union," she said. "I was looking at some of the some of the comments and responses to the chairperson's tweet when the statement was out. And it was very interesting how people from Cameroon, people from different countries were like, 'OK, violence also exists in our own countries, and people die in the hands of security forces.' So that's another expectation. It's a layer of expectation that's now being put on the African Union because of that statement."

But, rights groups are quick to chime in, no society is perfect. Human Rights Watch has documented how coronavirus lockdowns across much of the continent have spurred security forces to cross lines.  In Lagos and Nairobi, security officers shot and killed teenagers while attempting to enforce the restrictions.

And in April, soldiers entered the Johannesburg home of Collins Khosa, a father of three, and accused him of violating lockdown regulations. His family says they dragged him outside, slammed him against a cement wall, kicked, slapped and punched him. He died hours later, and military authorities exonerated the soldiers implicated in his death. His family is challenging that in court.