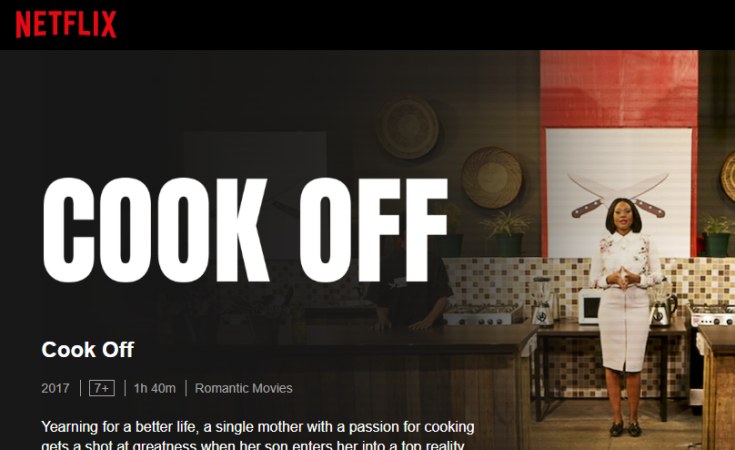 Netflix
A screenshot of the Netflix page for Cook Off.
Radio France Internationale
column By Ryan Truscott in Zimbabwe

A romantic comedy about a cooking contest shot in Harare in the last days under Robert Mugabe has been released on Netflix, and Zimbabweans are basking in a rare flash of good news.

University of Cape Town graduate Tendaiishe Chitima gives a luminous performance as Anesu in Cook Off.

Anesu is an underpaid single mum working shifts cooking sadza (Zimbabwe's staple) in the working class suburb of Budiriro. She just can't make things right with her mother, who's still furious about Anesu's pregnancy at the age of 16.

But Anesu's grandmother - played by the wonderful Jesesi Mungoshi, who had a starring role in Zimbabwe's until now best-known film "Neria" - believes in Anesu, as does her son.

Together they enter Anesu into a cooking contest. Against all the odds (and a big dose of treachery) the 31-year-old beats an impressive line-up of professional Harare chefs to win.

There's a love story in there too of course. Let's just say the brilliant Tendai Ryan Nguni, a successful Zimbabwean rapper, shows how versatile he is.

The film was made nearly three years ago, in the last days of strongman Robert Mugabe. No surprise then that the film, with an initial budget of just 8,000 US dollars, had to navigate many of the challenges familiar to those who read the Zimbabwe headlines: power cuts, no cash, no running water and, on at least one occasion, tear gas.

"I remember at one point one of the actresses, Fungai Majaya could not make it to the set because there were riots in town and she had been teargassed," recalls producer Joe Njagu.

Budgetary constraints meant the producers had to use what was available to them: they used the sets, props and costumes from "Battle of the Chefs: Harare", a real-life cookery show then being screened on state ZBC television.

Much of the power of the film is in the light it shines on the resilience of Harare residents getting on with their lives in ways not always recognisable to the consumers of news headlines only.

"It's the first time I didn't cry in a movie," says veteran actress Mungoshi.

"I think Zimbabwe needs more of this kind of film because of the difficulties we are facing economically and also with Covid-19. It is good to put a smile on someone's face."

The film deftly touches on class differences in urban Zimbabwe: one of Anesu's most dangerous opponents is the limousine-driving Milly Ann (Fungai Majaya) from Chisipite, one of Harare's (still very) posh northern suburbs.

This week's Netflix release comes as more than half of Zimbabweans are in need of food aid. Hunger has been worsened by a two-month-lockdown against coronavirus that has hit the livelihoods of the poorest. Economic turmoil is being hastened by a rapidly-devaluing local dollar.

Despite the real-life privations, the film's food theme does not jar three years after it was made: real life in Zimbabwe is after all not a single story.

Despite the hardships and the shortages, there are still plenty of high-end cars on the roads and supermarket shelves in the cities are still packed with imported goods.

The dish Anesu makes in her audition for the competition includes salmon incorporated matter-of-factly.

"The film is about love, relationships with family, with friends. It's about resilience in the face of adversity," says writer and director Tomas Brickhill who at one point contemplated selling his car to raise extra funds needed.

The film has won several awards at film festivals, including the Cambria Film Festival in the US. Monday's Netflix debut was its first release to a general audience.

Seeing a Zimbabwean film beside a Hollywood one on the Netflix homepage is what Zimbabwe's filmmakers need to help them claim their place on the international stage, said producer, Njagu.

A viewer tweeted: "I'm half way through and it's so captivating! A Zimbabwean movie on Netflix is such a great step for talent in our country."

Who is watching #CookOffZim right now?! Tell us what you think! Our Watch Party via Netflix Party didn't 100% work for everyone but fortunately it's on @netflix (did we tell you?) and we'll be chatting here online via the hashtag #CookOffZim! #NetflixZimbabwe #NowStreaming pic.twitter.com/Q2Hud1Yi4m - Cook Off the Movie (@CookOffZim) June 1, 2020

Cook Off Becomes First Local Film to Show on Netflix