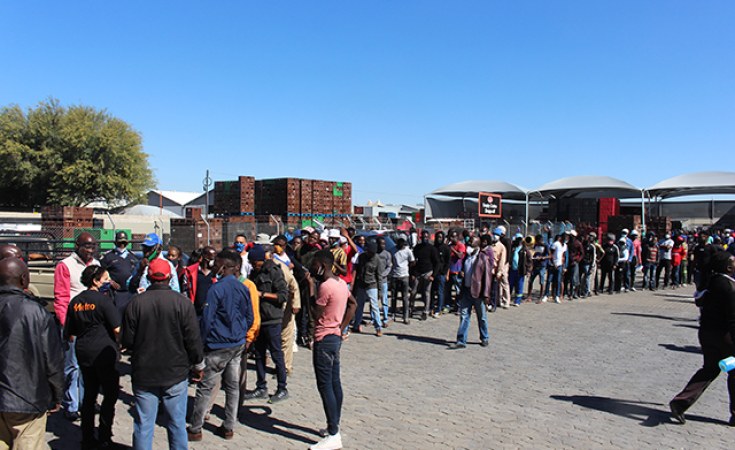 With the ban on the sale of alcohol lifted on Tuesday morning, Namibians rushed to retail outlets across the country to buy alcohol for their businesses and personal consumption.

The ban was implemented to ease and mitigate risks associated with the Covid-19 pandemic. "If you look outside, 90% of those people out there make a living from trading liquor.

"We have branches across the country and all the stores look the same," Bryan Davis, managing director of Metro Cash & Carry in Windhoek's northern industrial area, said.

Davis said a sizeable part of their business is liquor, so they also battled in the last two months, but have not retrenched any employees. He said they were fortunate that the store also sells food.

When The Namibian visited the shop yesterday, the public disregarded social distancing regulations and the wearing of masks.

As the clock struck 12h00, the shop's doors remained closed for people to stand in a proper queue to ensure no one pushed their way in. A police officer said they were avoiding opening the doors until people listened to instructions.

The store manager eventually handed people numbers to maintain order. Davis said they have implemented restrictions such as only allowing a certain amount of people inside the store. Jenny*, a customer waiting outside the shop, welcomed the sale of alcohol as her business struggled for the past two months. She cautioned her customers to be careful with their alcohol consumption and planned on purchasing alcohol worth N$15 000 for her business.

All 14 regions, except Walvis Bay have moved to stage 3. Under this stage, alcohol may only be sold between 12h00 and 18h00 from Monday to Friday, from 09h00 to 13h00 on Saturdays, and not at all on Sundays. Buying and selling is only permitted for takeaway purposes. Only holders of valid liquor licences will be permitted to sell alcohol. Anyone contravening these regulations will be fined N$2 000 or face six months' imprisonment.

Minister of Health and Social Services Kalumbi Shangula last week said night clubs, gambling houses and casinos carry a high risk of spreading Covid-19, and will not be permitted to resume activities during stage 3.

A customer in the Metro Hyper queue was happy about the lifting of the ban. She said she came to buy stock for her small business at a farm outside Windhoek. "Mense is dors daai kant [people are thirsty that side]," she said.

Bizza, a customer who owns several businesses, including a bottle store, said he waited two hours before receiving his stock worth N$22 000. He said his business was not heavily affected by the lockdown since his restaurant operated on a takeaway basis.

At Black Chain market, Katutura, the public adhered to regulations while buying their booze.

Scores of people yesterday queued up in front of Metro Cash and Carry at Oshakati.

As shop doors opened at around 12:00 many customers could not keep a safe distance from one another, forcing security guards to dispatch them. Customers were allowed to enter the shop in small groups at a time.

Many welcomed the lifting of the alcohol ban, saying it was long overdue as many people's livelihood depends on the selling of alcohol.

Anna Matheus told The Namibian she welcomes the move and she is happy she can continue selling alcohol to earn a living. "We have been suffering at home with no money to buy food, but with the reopening of bars, I really hope my small business will return to normal. I also can't wait to finally have a long sip of my favourite beer," she said.