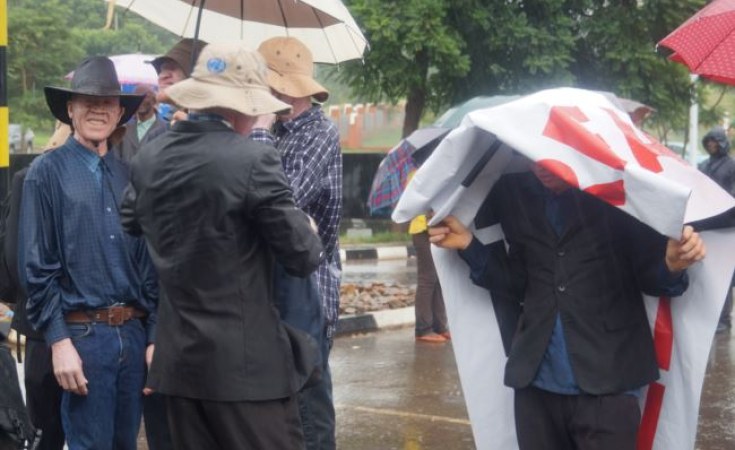 Lameck Masina/VOA
Protesters braved the rain in their bid to seek a solution aiming to end attacks on people with albinism in Malawi (file photo).
Nyasa Times (Leeds)
By Watipaso Mzungu

Centre for Human Rights and Rehabilitation (CHRR) and Youth and Society (YAS) have written the Chairperson of the Defence and Security Committee of Parliament, Ken Zikhale Ng'oma, registering its concern over security lapse in the country and failure by the Committee to act.

Zakhale: Letter sent to him

CHRR acting executive director Michael Kaiyatsa and YAS executive director Charles Kajoloweka, in a letter made available to the Nyasa Times, say they have noted with deep concern a seeming lack of peace and security in the country in recent months, especially after the elections, from time of the mass demonstration, which were organized nationwide calling for the resignation of Malawi Electoral Commission (MEC) chairperson Jane Ansah.

Kaiyatsa and Kajoloweka stress that while an effort was made by the Malawi Police and the Malawi Army to provide for security in the process, there were notable lapses in security.

The two human rights activists are addressing the chairperson of the Defence and Security Committee of Parliament under Order 160 of the National Assembly and the overall Constitutional oversight role of the Assembly.

Kaiyatsa and Kajoloweka state that apart from the general lapse in security, there were also some notable improper use of power by the officers of Police and the Malawi Army.

"There are confirmed reports of rape and sexual assaults of women in and around Msundwe, Mpingu and M'bwatalika areas on the outskirts of Lilongwe during post-election demonstrations in the capital, Lilongwe. An investigation by the Malawi Human Rights Commission established that police officers raped 13 women, defiled one girl and sexually assaulted three under-18 girls during their October 8 2019 operation around the area. Up to date, no one has been arrested for these gross human rights violations.

"Further, on 21 February 2019, Buleya Lule died while in police custody in Lilongwe, just hours after appearing in court as one of six suspects in the abduction of Goodson Makanjira, a 14-year-old boy with albinism. An inquiry into Lule's death carried out by the Malawi Human Rights Commission (MHRC) found the deceased was tortured, and his immediate cause of death was from torture using electricity.

"In a related case, on 24 September 2019, Justin Phiri died in police custody in Mzuzu. Phiri was among approximately 20 individuals arrested and charged with inciting violence during the September 19 public demonstration at Karonga Town. Phiri was also among several individuals subjected to torture by soldiers for allegedly wounding two soldiers during the demonstration. Police investigations into Phiri's death remain inconclusive," reads the letter in part.

Kaiyatsa and Kajoloweka also cite the damaging of the equipment of the Malawi Electoral Commission (MEC) and National Registration Bureau (NRB) and an assault of the staff from the two institutions by suspected Democratic Progressive Party (DPP) cadets, but are yet to take them to court so that they account for their criminal activities.

Instead, MEC and the Malawi Police merely informed the nation that they were unable to provide security because they were stretched in capacity due to coronavirus disease (Covid-19) measures.

"In addition to these incidents, there have been continued security threatening incidents such as the petrol bombing of opposition properties which has also resulted to the loss of lives and damage to properties thereof. For example, on Monday, 4 May 2020 UTM office were petro-bombed in Area 24, Lilongwe.

The inferno attack on offices which also played home to Tambala family, claimed three lives-- (mother, father and one kid) - and left four family members with horrible burns. Disturbingly, there has been no condemnation from authorities or indication to investigate the heinous attack and bring the perpetrators to justice. "

The CSOs further pointed out that there has been an attack on the President as well as a fierce attack on the vice-president's convoy in Phalombe, and similar incident in other areas.

"The involvement of the Malawi Army to support the Police in providing for security has also allegedly been stopped," narrate the activists.

They also wonder why the Defence and Security Committee of Parliament has remained quiet while the country is witnessing an increase in a spate of savagery attacks linked to bloodsucking rumours, which has seen the country losing 11 lives in mob justice linked to these accusations.

The attacks also spread to service providers such as Electricity Supply Corporation of Malawi (ESCOM) and health workers who were severely assaulted by community members who suspected them of being bloodsuckers in Nkhotakota and Mchinji, respectively.

"Related to these violations are attacks based on witchcraft accusations. In the last few months, Malawi has recorded over 10 deaths of people accused of witchcraft. Those responsible are rarely arrested and brought to book to face justice. All of the above incidents show a lapse of security, improper use of security personnel and power and, in some cases, deliberate inaction or omission of duty with an aim of facilitating an unsecure environment to give room for perpetrators of violent acts.

"And while all these are happening, we have noticed that there is no action or activity on your part as a committee of Parliament and this silence and inaction provides a gap in the oversight function over the executive and the security institutions that operate under them, i.e., the Malawi Police and Malawi Army," they state.

Kaiyatsa and Kajoloweka say in light of the above scenarios, they are challenging the Committee to demand an explanation from the Executive and the security institutions on their exercise of powers with respect to specific issues such as the Msundwe alleged police rape and use of force by police on citizens.

The activists are also demanding that the Committee should seek an explanation from the Executive on failure by the police to act in the Phalombe, Mulanje, Area 24 arson incident where opposition members were victims and property and lives were lost,

"We further demand that you inquire from the Executive and the security institution on their failure and inability to provide security to NRB and MEC registration exercises as were being undertaken in reediness to the 2020 Presidential elections; inquire from the executive and security institutions on their plans and readiness to provide sufficient security to the nation, citizens, property and institutions, in accordance with the law and rights, during the campaign period, the elections and in the aftermath of the elections," demand Kaiyatsa and Kajoloweka.

They also task the Committee to inquire from the Executive why the Independent Police Complaints Commission, established under section 128 of the Police Act, has not been put in place many years after the Act came into operation.

They observe that this is contributing to lack of accountability for the police's exercise of power.

"We also task you to inquire from the Executive why an Inspector General of Police has not been appointed to fill the vacancy of the office as required by section 154(2) of the Constitution which requires that the office must be held by a person who, when duly appointed, is accordingly confirmed by the National Assembly.

"By having an acting Inspector General for a prolonged period, the same contradicts with the spirit of the Constitution and public service policy which militates against holding acting position for a longer time," say Kaiyatsa and Kajoloweka.

CHRR is a non-partisan, non-profit, nongovernmental organization dedicated to defending and promoting human rights and good governance in Malawi.

Police in Thyolo Distributes Sunscreen Lotion to People With Albinism

Albino Killings On the Rise in Malawi

This Man Uses Music to Fights Myths About Albinism in Malawi
Tagged:
Copyright © 2020 Nyasa Times. All rights reserved. Distributed by AllAfrica Global Media (allAfrica.com). To contact the copyright holder directly for corrections — or for permission to republish or make other authorized use of this material, click here.