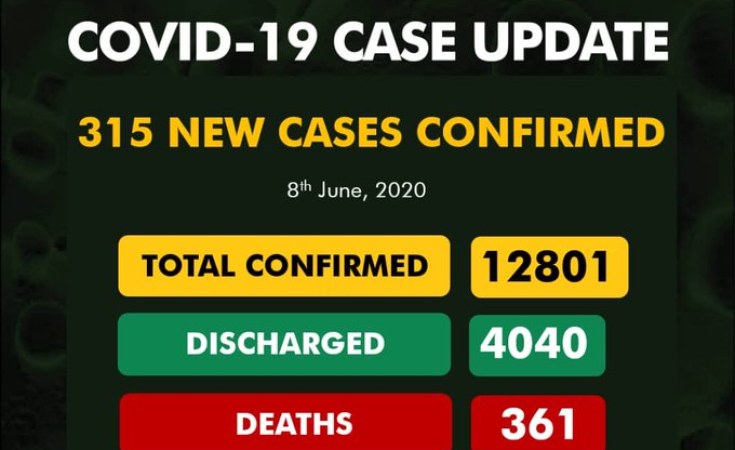 Nigeria's tally of confirmed COVID-19 cases rose to 12, 801 as 315 new infections were announced by the Nigeria Centre for Disease Control on Monday.

Lagos recorded its highest daily figure on Monday, with 128 infections. The state remains the epicentre for the disease.

There was an increase in the number of infection reported on Monday as compared to Sunday (260).

In the past weeks, the numbers of infections and deaths in the country have increased. The number of recovered and discharged patients from the virus is also increasing daily.

The agency in a tweet late Monday night said the 315 new cases were reported in 14 states - Lagos,

So far, only one state in the country, Cross River, is yet to report a case of COVID-19.

Since the onset of the outbreak in Nigeria in February, NCDC said 78, 244 samples have so far been tested.

As at the time of reporting, there are 8, 400 active cases of COVID-19 in the country, 4,040 have recovered and have been discharged from the virus with 361 deaths recorded.

The Secretary to the Government of the Federation, Boss Mustapha, during the Presidential Taskforce briefing on Monday said "a major outcome of Nigeria's response to COVID-19 over the last 100 days is the recognition of state's need to scale up responsibility for their public health response."

He said the true burden of COVID-19 in the country can only be known if the nation keeps testing more for more cases.

As such states have been advised "to continue to collect more samples, and strengthen their surveillance capacity".

New Criteria for Nigeria Schools to Reopen In Shadow of Covid-19
Tagged:
Copyright © 2020 Premium Times. All rights reserved. Distributed by AllAfrica Global Media (allAfrica.com). To contact the copyright holder directly for corrections — or for permission to republish or make other authorized use of this material, click here.