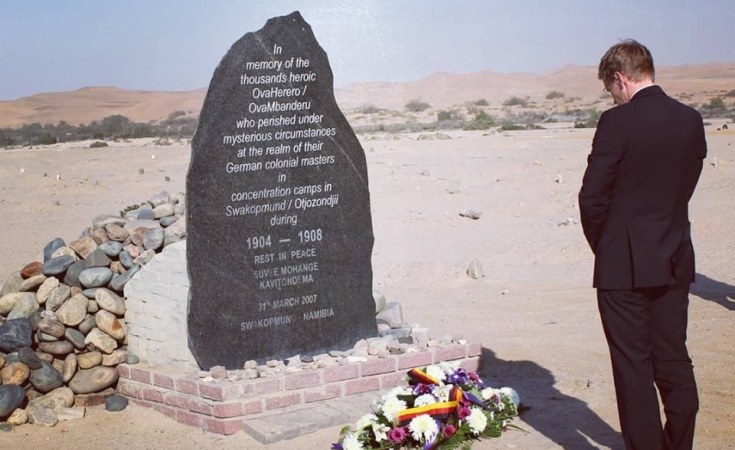 German Embassy Windhoek/Facebook
Prime Minister of the German federal state of Schleswig-Holstein and president of the Federal Council Daniel Günther at a Swakopmund graveyard monument erected to commemorate the victims of the colonial concentration camp there (file photo).
The Namibian (Windhoek)
By Sakeus Iikela

PRESIDENT Hage Geingob says the government had rejected an offer by the German government to pay Namibia €10 million (about N$180 million) as reparation for the 1904 to 1908 genocide.

The Nama/Herero genocide perpetrated by the German settlers in Namibia resulted in the deaths of more than 60 000 Herero and over 10 000 Nama people.

The president said the committee negotiating on behalf of the Namibian government with the German government, led by the vice president, rejected the offer as an insult.

"First they offered €10 million (euros) ... honestly it is an insult. We said that's an insult," Geingob said.

He said this in the National Assembly last week responding to questions from opposition parties on the progress made in the genocide negotiations.

The president said negotiations have now taken a twist and the German government will soon come to Namibia to apologise officially.

Geingob said he was briefed that the ongoing negotiations for reparations were at an advanced stage and that the German government was working out modalities on how to compensate the affected communities.

"Genocide issues have moved now and I am told the Germans came around on the genocide as a concept. They are saying it is a post-World War II phenomenon. But they have agreed . . . if they were targeting groups of people, whether it is new or happened years ago, that is tantamount to genocide.

"That is now accepted, I am told they have apparently agreed to come and apologise at a high level, maybe here in parliament. If that's the best way," Geingob said.

The president said the two negotiating parties have identified eight sites where genocide was committed, which the German government will be "addressing".

He said the German government would now - after the negotiations are concluded - "address those areas by developing them and so on".

"If something was wrong, you must do good to apologise, that's now apparently about money for projects. The areas where it is said the descendants are living; they must develop it. We have already started with the construction of shrines or something in areas where we know people were living, including where chief Hosea Kutako was living, as part of the resolutions of the second national land conference," Geingob said.

He urged Namibians, especially communities affected by the genocide, to be patient and unite so that "the Germans can take us seriously".

"I hope you are not going to attack them when they come here to talk. This is the thing we must take seriously and not to look divided. We must stand together and we shouldn't give the Germans a chance to laugh at us. Therefore, it should be where we hold hands; I don't want us to be divided by Germans," the president said.

Germany to Finally Apologise for Genocide

State of The Nation Address by President