African Union: African Journalists Call for the Cessation of Hostilities Against Journalists to Ensure Safe Practice of Journalism in Africa 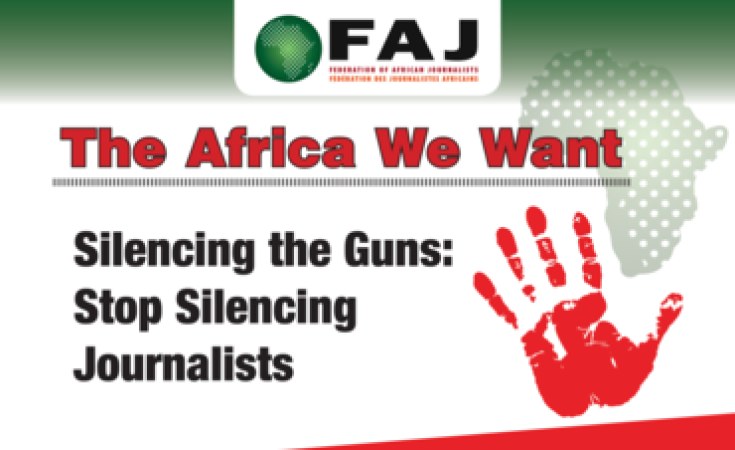 Dakar — The Pan-African journalists organisation, the Federation of African Journalists (FAJ), together with national journalists' unions and associations across the continent have today called on the African Union (AU) to make the immediate cessation of targeted hostilities against journalists a top priority in order to ensure the safe practice of journalism in Africa under the AU’s campaign on “Silencing the Guns: Creating Conducive Conditions for Africa’s Development”.

Reacting to the decision of the African Union’s Peace and Security Council (PSC) earlier this month, which endorsed the call by the Chairperson of the African Union Commission, Moussa Faki Mahamat, to put an end to conflicts and the cessation of all hostilities in the continent, African journalists stressed in a joint letter that it is also a clarion call against the killing of journalists with impunity and the many ongoing conflicts that claim the lives of journalists and media workers without recourse to justice.

Thirty (30) African journalists’ unions and associations with the backing of FAJ and the International Federation of Journalists (IFJ) stated in their joint letter to the AUC that the call to “Silencing the Guns...” should be expanded to include journalists who are regularly gunned down just for performing their noble duties in keeping their citizens informed. There is no year that passes, without a journalist being killed with impunity in Africa and worse still, the perpetrators are not held to account.

The letter, which was timed to follow the first sitting of PSC for this month, urged the Chairperson of the African Union Commission “to make an integral part of this call to silence the guns a specific pledge for an end to the deadly violence against journalists in Africa, as a means of silencing them and instilling fear in their fellow journalists.”

The letter, which echoed similar sentiments by the UN Secretary General, António Guterres, has appealed to the Chairperson of the African Union Commission “to call on AU Member States to end all forms of hostilities against journalists such as arbitrary arrests, intimidations, spurious criminal persecutions, stigmatisation and denial of access to information which have accrued during the fight against the coronavirus pandemic. African governments cannot defeat COVID-19 alone, and must include journalists and the media in general in the fight against the pandemic in every country.”

As African Union Member States are undertaking extraordinary measures to curb the spread of COVID-19 to effectively protect the right to life, right to health and well-being of their populations, African journalists have reiterated their unflinching commitment to the AU and its member states, to work together in silencing the guns and NOT to allow the guns to silence journalists in Africa.

Watchdog Condemns Attack on Media Freedom in Angola
Tagged:
Copyright © 2020 International Federation of Journalists. All rights reserved. Distributed by AllAfrica Global Media (allAfrica.com). To contact the copyright holder directly for corrections — or for permission to republish or make other authorized use of this material, click here.