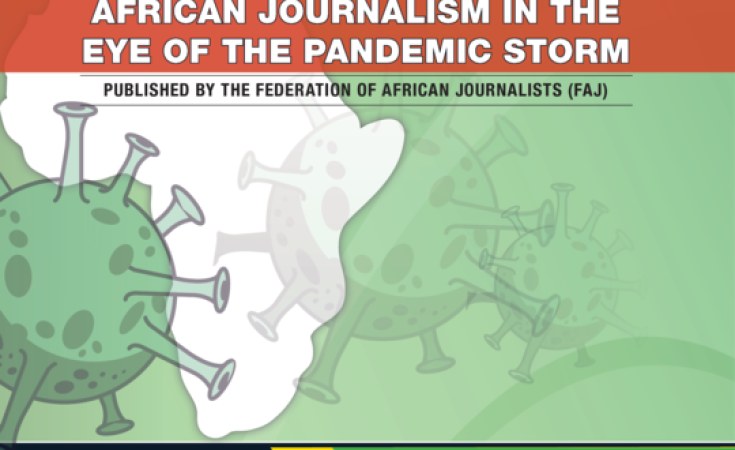 "African journalism in the eye of the pandemic storm" is the result of a survey conducted among FAJ's members and to which 20 unions replied, representing 57% of its affiliates in Africa.

The reports shows that African governments' programmes to respond to the economic impact of the pandemic have had a "negative" impact on the media sector and lacked proper support of media workers.

Unions point in particular at quarantine measures which have prevented journalists from doing their jobs by a failure to understand the reality of the profession. FESYTRAC of Congo Brazzaville said "COVID-19 had a negative impact in the media sector, as fundamental freedoms, the right to work, the free movement of persons and goods were restricted by the state of health emergency, curfew and population confinement."

The report shows that governments started by treating journalists as ordinary citizens without acknowledging their professional need. In Somalia, for instance, NUSOJ had to build a fully-fledged campaign to convince the Federal Government of Somalia to consider journalists as key workers. Similarly, in Morocco, the SNPM organised a strong lobby action in favor of public interest reporting about the coronavirus.

Respondents condemned the inertia of governments in supporting media workers. Over 50% of respondents said that their government had undertaken no specific effort to alleviate the physical impact of the virus on media workplaces. UJT of Chad described "a government contingency plan including support for economic operators, social assistance to vulnerable groups but nothing on the press sector" and SYNPICCS of Ivory Coast "The government has so far done nothing for the media sector, apart from a few masks and other hygiene equipment".

Seventy-five percent of respondents said governments' guidelines on social distancing resulted in a major overhaul of the physical working conditions of journalists, from the reduction of journalists' physical presence in newsrooms, to the increase of teleworking, the change of tools for conducting interviews and the wearing of protective equipment. South Sudan was the only country where journalists' union UJOSS maintained that the government "did not follow the WHO COVID-19 rules and orders" and that its only advice to citizens was to take care of themselves without proper quarantine measures, resulting in poor awareness of the pandemic.

Only 20% of governments have specifically addressed the crisis of news media. In the Ivory Coast, authorities announced a support fund which details remain unknown. In Senegal, the government doubled aid to the press from CFA Franc 700 million to 1.4 billion and announced a Special Fund to support businesses and the media sector. In Togo, the government increased aid to the press by 50% from CFA Franc 100 to 150 million, allocated to 180 press organs, eight television stations and 56 radio stations. The Kenyan government has announced the strongest stimulus so far by allocating $1 million to community media to keep them afloat.

The report warns that journalists have not benefited from this aid, except in Mozambique and Angola where executive decrees ensure journalists and media workers will not lose their jobs.

A broad range of large and medium-sized publishers and news outlets started implementing cost-saving plans that consist of both paid and unpaid leave for significant numbers of staff and reduced salaries for others. Nearly 100% of respondents described this onslaught on jobs in the most graphic terms. Djibouti is described as the only country unaffected because of the state-owned model of all media.

Many media outlets have stopped publishing or reduced their coverage. In Chad, the UJT reports that "the entire private press, which accounts for more than 90% of the media space, is taking the brunt of the crisis... Many newspapers no longer appear or appear abruptly when an opportunity to go to print is offered to them; others even change their format from tabloid to A4" . In Sudan, newspapers no longer exist as "21 dailies have been suspended", reports SUJ.

In almost every country, freelance journalists have been left out from every negotiation and plan, the report says. In Ivory coast freelancers are "on their own" says SYNAPCCI and in Uganda, UJU says "many freelancers were sent home without any pay, and are still stranded there without any money".

Journalists unions have tried to respond to the situation by delaying or suspending their activities, engaging with governments to ensure the survival of journalism, monitoring their members' working conditions, and providing safety advisories and guidance on a whole range of issues from safety to ethics to labour rights. In many countries they obtained and distributed preventive equipment such as facemasks and hand sanitisers. In Kenya, the union KUJ successfully took two media companies to court to force them to treat the cuts in salaries they wanted to impose as debts agreeing that the companies should pay back once normality returns.

The report finally deplores the paralysis of media employers in proposing alternatives to save the press and calls on trade unions to lead the way in building campaigns to protect media workers and jobs.

Note to the press:

Tagged:
Copyright © 2020 International Federation of Journalists. All rights reserved. Distributed by AllAfrica Global Media (allAfrica.com). To contact the copyright holder directly for corrections — or for permission to republish or make other authorized use of this material, click here.