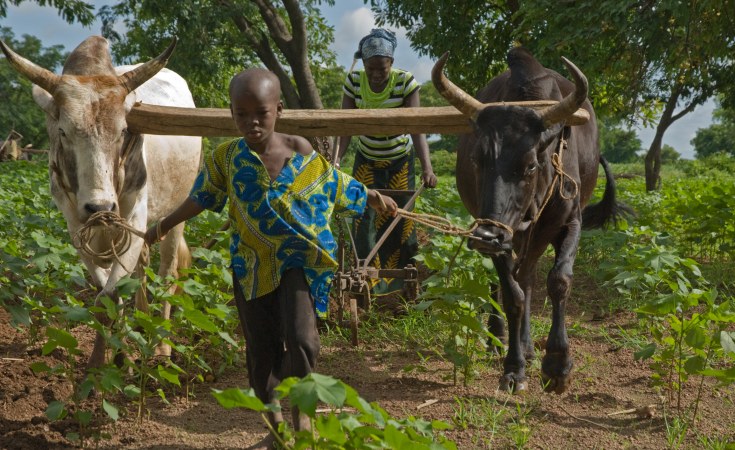 Bamako — As cotton price tumbles during pandemic, farmers worry the state support they rely on to grow food in a warming climate will dry up

For years, Mali's government has helped Yacouba Kone pay for the fertiliser he uses on his cotton crop - as long as he also devotes some of his land in the south to growing cereals.

In Mali, cotton and food are closely linked: To hold the country's spot as one of Africa's top cotton producers and keep its people fed, cotton farmers get state subsidies on the condition that they also cultivate crops like corn and millet.

That support has made it possible for farmers to access some of the resources they need to adapt to the effects of climate change, such as buying fertilisers to enrich nutrient-depleted soil and using drought-resilient seeds.

But now Mali's food production is under threat as the economic fallout from the coronavirus pandemic has sent the price of cotton plummeting, farmers warn, leaving them unable to afford key climate-smart inputs, even with government help.

The West African nation has recorded about 1,860 cases of COVID-19 and just over 100 deaths from the respiratory disease, according to a Reuters tally.

As Mali's leaders focus on buying hospital equipment and rescuing small businesses, farmers say not enough is being done to shore up the agricultural sector, leaving it at the mercy of climate change and the pandemic.

Kone said the state-owned Malian Company for Textile Development is now paying around 25% less for the cotton it purchases from him and other farmers.

All the cereals they produce, including corn and millet, depend on the fertilisers they buy with cotton proceeds, said Kone, who lives in the Kadiolo region, one of the country's major grain-producing areas.

"If the state does not take urgent measures to support farmers, the coronavirus will jeopardise food security," he said.

Oumar Tamboura, Mali's national director for agriculture, acknowledged that the pandemic had resulted in a significant drop in income for the "vast majority" of small-scale farmers, mainly due to difficulties in marketing some of their products.

The 3.5 million farmers making up Mali's cotton industry produced 700,000 tonnes of cotton and more than 10 million tonnes of cereals in the 2019/2020 season, according to farmers' organisations.

Since the start of the coronavirus pandemic, the price of cotton - traditionally a high earner for farmers - has dropped from 275 West African francs (about $0.50) per kilo to 200 francs.

While the price of cotton falls, the cost of fertiliser is rising as lockdown measures limit the supplies that can be shipped in from China.

Farmers say the price of a 50-kilo bag of fertiliser has jumped by a third over the past year to 18,000 West African francs ($16) today.

As a result, Kone said, many Malian farmers are already struggling to pay back loans and are afraid to spend any more on boosting production, because it would put them deeper into debt. 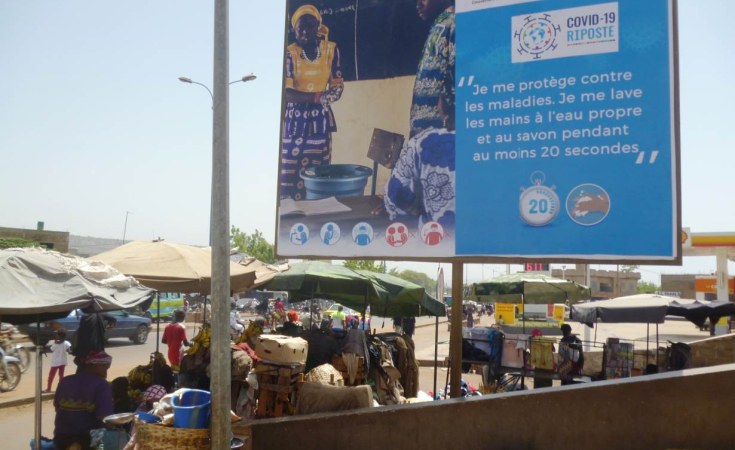 Soumaila Diarra/Thomson Reuters Foundation
A public health advertisement to prevent the spread of novel coronavirus on a street in Bamako, Mali, May 21, 2020. The sign says: "I protect myself from illnesses. I wash my hands with clean water and soap for at least 20 seconds".

The farmer said he usually produces two tonnes of cotton each season - but due to the lost income, his next yield will be only half as much.

Ibrahima Coulibaly, president of the National Coordination of Peasant Organisations (CNOP), a non-profit advocacy group, warned that without government support, the pandemic could undo much of the progress Mali's farmers have made in adapting to climate change.

Over the past decade, the country has seen rising temperatures, more frequent droughts and floods, and shrinking arable land.

Still, the contribution to Mali's economy of the primary sector - made up of mining, forestry and, in large part, agriculture - remained steady at about 40% between 2017 and 2019, according to the eight-nation West African monetary union.

Since the 2007/2008 food price crisis, when a dramatic spike in the prices of staple foods pushed the number of poor people in the world up by 150 million, Mali and other African nations have subsidised agriculture, including fertiliser and equipment.

Mali has also implemented a range of other measures to help its farmers withstand climate shocks, Coulibaly said.

They include focusing on efficient water use, encouraging sustainable land management and rolling out agricultural insurance services at a national level.

"Nowhere in the world have people adapted better to climate change than the countries of the Sahel. People have developed strategies that make them survive in the most hostile places," he told the Thomson Reuters Foundation.

Coulibaly worries that government spending on tackling the spread of COVID-19 will eat away at the subsidies farmers have come to rely on.

"This is a source of concern," he said. "The only thing that becomes important in such moments is having something to eat."

Tamboura of the agriculture ministry told the Thomson Reuters Foundation the budget for agricultural subsidies remains at 25.6 billion West African francs, the same as before the pandemic.

He pointed to drought-resilient seeds as one resource the government is determined to keep on providing for farmers.

"It is obvious that seeds adapted to the climate play a fundamental role in food security," he said, adding that their use can boost agricultural output by up to 40%.

Farmers say the government should focus on protecting the agricultural industry from the economic consequences of the coronavirus outbreak.

Coulibaly of the CNOP called for increased investment in farmers and more support to help them access markets.

"All the measures that have been taken are related to distancing, sanitary measures... That's not the solution," he said.