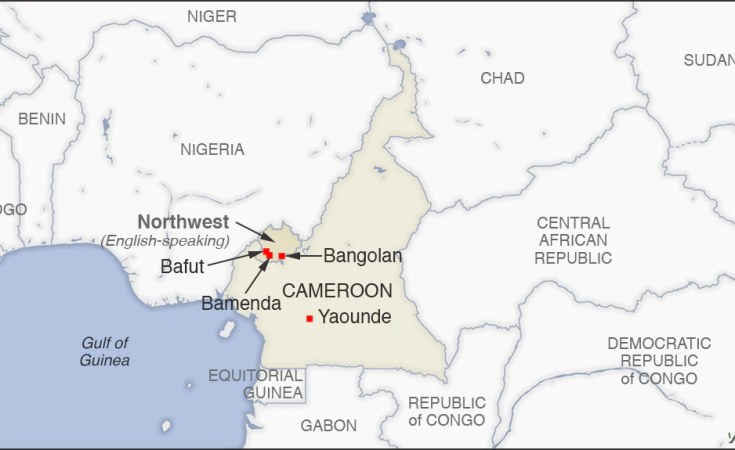 In Cameroon, thousands of children who fled the country's separatist conflict in western regions are marking the International Day of the African Child, which underscores the right to education. Schools in French-speaking regions hosting the children are calling for peace so that schools closed in the troubled English-speaking regions can be reopened. But peace is elusive after four years of fighting.

Treasure Fomunyuy, a 13-year-old who escaped from Cameroon’s English-speaking northwestern town of Kumbo a year ago after his school was torched by armed men, has joined 300 other school children at the Etoug Ebe government school in Yaounde to ask for closed schools in the English-speaking North West and South West regions to be reopened.

Fomonyuy said he does not want his peers to continue to be deprived of education.

"I stayed in the house for three years without going to school. I do not want my brothers and sisters who are in the North West and South West to be stopped from going to school. Many of them want to be doctors, teachers and presidents," he said.

Fomonyuy lives with his uncle, who has agreed to pay his fees. He said many children lack the opportunity he has.

Mumah Bih Yvonne of the Cameroon Women’s Peace Movement is asking for the right of children to education to be respected on the Day of the African Child in commemoration of the June 16, 1976, street protests in South Africa against poor quality education there.

Yvonne said the situation in Cameroon is becoming worse because children are outrightly denied access to education.

"We are sincerely calling on the stakeholders (protagonists) to stop hostilities. Please, please, our children need their education. Without education they are nothing. Education is their right," Yvonne said.

The separatist crisis began in 2016 when English-speaking teachers and lawyers organized protests against what they called the marginalization of English in the majority French-speaking nation. The military responded with a crackdown, and armed groups took up weapons, saying that they were defending their people from military brutality.

Asheri Kilo, the secretary of state in the Ministry of Basic Education, said the government is determined to educate all children, but added that some schools are constantly attacked, torched, looted or are occupied by separatists.

"In the North West, 46 elementary schools were burned down by the separatists and 24 of those schools were occupied by them. In the South West, there were 73 schools burned and 35 occupied. Of course, the military is taking care of getting the separatists out of the school campuses that have been occupied," Kilo said.

The separatists have blamed the military for torching schools and public buildings and said they will allow children to go to school only after the central government withdraws its troops from the English-speaking regions.

Caught between conflict and coronavirus in Cameroon