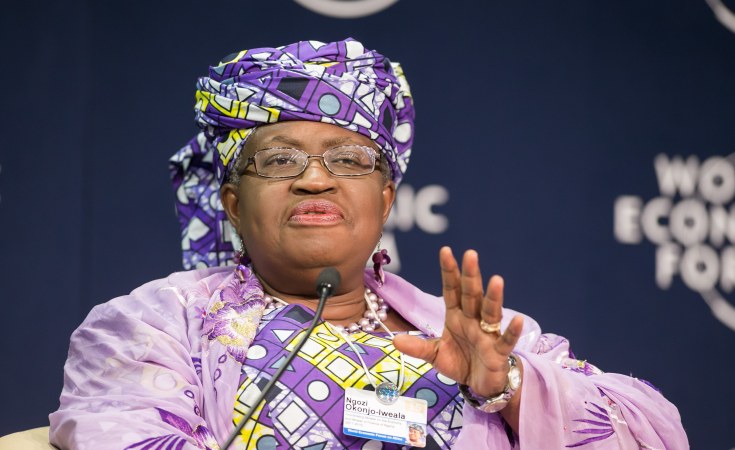 The Office of the Legal Counsel of the African Union has said that the candidature of Ngozi Okonjo-Iweala for the World Trade Organisation's director-general position is not in line with extant rules.

The legal opinion is contained in a letter dated June 15, in which the counsel presented its views to the Permanent Mission of the Republic of Nigeria to the African Union in Addis Ababa.

Referring to its Note verbal 150/2020 dated June 9, demanding the immediate review of the opinion of the Office of the Legal of the AUC, the counsel argued against the nomination of Mrs Okonjo-Iweala, adding that it was against extant rules.

The letter, seen by PREMIUM TIMES, comes against the background of controversies trailing Mrs Okonjo-Iweala's nomination for the top job.

Mrs Okonjo-Iweala, a former Nigerian finance minister, was nominated for the position by President Muhammadu Buhari after Nigeria withdrew the candidacy of Yunov Agah, Nigeria's permanent representative to WTO.

In a diplomatic note through Nigeria's mission in Addis Ababa, Ethiopia, which hosts the AU headquarters, Mr Buhari announced Mrs Okonjo-Iweala as the country's candidate for the WTO job.

The two other African candidates shortlisted by the AU alongside Mr Agah were Egypt's Hamid Mamdouh, a trade lawyer, member of the WTO Secretariat, and trade negotiator for Egypt; and Beninoise Eloi Laourou, the ambassador and permanent representative of Benin to the United Nations and other organisations in Geneva.

Mr Buhari did not give reasons for withdrawing Mr Agah's candidacy but the president mentioned Mrs Okonjo-Iweala's record of accomplishments in international development and finance.

Mr Agah, who has about 30 years experience in international trade, has spent 15 years at the WTO, starting as Nigerian Permanent Representative to WTO in 2005 before becoming the organisation's deputy DG in 2013.

Mrs Okonjo-Iweala's nomination has raised concerns among Nigerians in the diplomatic and international development circle.

Earlier, in its reaction to the replacement of Mr Agah for the top job, Egypt opposed Nigeria's substitution and sought the country's disqualification from the AU endorsement process.

The Egyptian government argued that the new nomination of Mrs Okonjo-Iweala came well after the due dates and that she was not one of the three candidates considered and shortlisted in the period stipulated.

Egypt, in a memo circulated in Addis Ababa, requested the AU to "officially inform the African Group" that Nigeria has no candidate and so "Abdulhameed Mamdouh of the Arab Republic of Egypt and Eloi Laourou of the Republic of Benin are currently the only two endorsed African candidates" in the race.

The north African country also hinted at consultations with Benin towards a consensus candidate.

But the nomination of Mrs Okonjo-Iweala received a boost last week as Republic of Benin withdrew its nomination in support of Nigeria's nominee for the job.

Benin's decision to withdraw its nominee was revealed in a letter addressed to the Permanent Mission of the Republic of Benin to the United Nations Office and other International Organisations based in Geneva, Switzerland on Friday.

In her two-page letter, Benin informed the Permanent Missions of the Member States of the International Organisation of La Francophonie (01F) at the World Trade Organisation (WTO) in Geneva of its decision to withdraw its candidate, Eloi Laourou.

Indications, however, emerged Tuesday that there are more hurdles for the former finance minister to cross in actualising her dream of clinching the WTO top job.

The counsel referred to its Note verbal 150/2020 dated 09 June 2020 demanding the immediate review of the opinion of the Office of the Legal of the AUC, shared at the meeting of the ministerial committee on candidatures held at the level of the ambassadors on June 4.

The counsel noted that in July 2019, the Executive Council during its Thirty Fifth Ordinary Session held in Niamey, Niger, called on the AU member States to consider presenting candidates to the AU Ministerial Committee on Candidatures in the International System for the position of WTO Director General by November 30, 2019, with a view to endorse one candidate during the February 2020 Ordinary Session.

"During the February 2020 Summit, the three candidates were considered," the counsel said. "However, due to the lack of consensus to agree on one suitable candidate during the February 2020 Summit, the Executive Council through decision Ex Cl 1090 (XXXVI) recalled the Ex Cl Dec 10T2 (XXXV) and endorsed respectively the candidates from Benin, Egypt and Nigeria as short listed for the post of the Director General of the WTO (the names of the candidates were incorporated in the Report of the Committee on International Candidatures presented to the Executive Council).

"Moreover, it requested the Ministerial Committee on African Candidatures within the International System to consider the matter and report to the Executive Council's 3rd Ordinary Session with a view to agreeing on a single candidate."

Commenting on the appropriateness or otherwise of Mrs Okonjo-Iweala's nomination, the counsel noted that the submission of the candidates shall be in line with certain stipulated conditions. It referenced rules 11 (1,2,3) and 12 of the Rules of Committee.

"Candidatures shall be submitted to the Commission at least two (2) months prior to the Sessions of the Executive Council, which shall consider them. The submission shall be accompanied by relevant information related to the submitted candidatures, including the nature of each post, date and place of elections," it added.

Furthermore, the counsel argued that the rules state that the Committee may accept candidatures submitted after the deadline "only when no other candidatures for the position have been submitted in the prescribed time; the submission of candidatures has been closed; and there are more vacancies reserved for Africa than the submissions received, among others".

The counsel therefore argued in its position that the nomination of Mrs Okonjo-Iweala contravened extant rules, specifically rules 11 and 12.

While the AU faults her nomination, the World Trade Organisation (WTO) named Mrs Okonjo-Iweala among the three candidates "whose nominations have so far been accepted" to vie for the top position.

The chair said Mrs Okonjo-Iweala would be squaring up against the Mexican representative, Jesús Seade Kuri, and Abdel-Hamid Mamdouh of Egypt.

Passionate Support for Adesina and Okonjo-Iweala - a Second Re-Invention of Buhari?