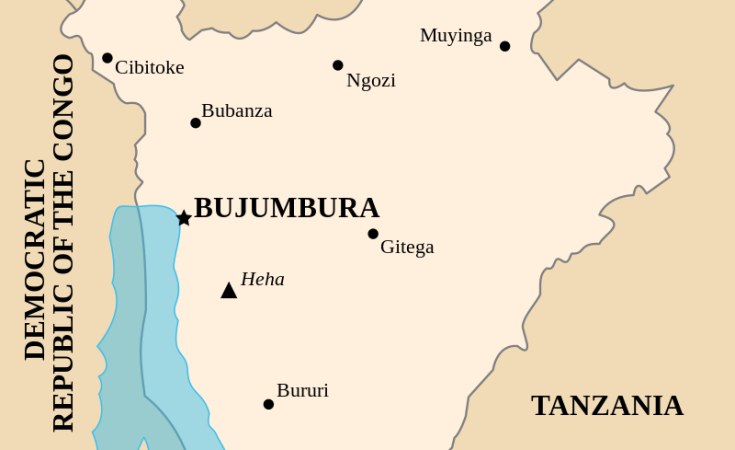 The new Burundian President, Maj. Gen. Evariste Ndayishimiye was sworn on Thursday for Burundi for a seven-year term in office, following his election on May 2.

The ceremony which was administered by Burundi's Constitutional Court took place at the Ingoma Stadium in the administrative capital Gitega.

No foreign heads of state were present when he took the oath of office, where he pledged to defend the nation's interests as well as unify its citizens.

"I will not fail the unity charter, the constitution and other laws, I will uphold unity among Burundians, peace and justice for all," the head of state said while he took the oath.

Ndayishimiye, 52, who was elected on May 20, was initially scheduled to take office in August this year, but the ceremony was fast-tracked to fill the leadership vacuum created by the sudden death of the then outgoing President Pierre Nkurunziza.

After 15 years in power, President Nkurunziza died on June 8 aged 55 due to a cardiac arrest, the government of Burundi said.

The death of Nkurunziza almost caused a constitutional crisis, after he died at a time when his successor had already been elected.

Under normal circumstances, the Burundian constitution prescribed that the Speaker of Parliament becomes interim president until the president-elect takes over in August.

However, the sitting parliamentary Speaker was also constrained by the fact that his own term would come to an end mid-way into his interim presidency.

This led to the intervention of the Burundian constitutional court, which last week ruled that Ndayishimiye takes office earlier than had been stipulated.

According to the Burundian constitution, as amended to date, the new head of state will be eligible to run for a second term.

According to available information, Ndayishimiye, commonly known as "Neva", was a law student in the University of Burundi when the civil war erupted in 1993 following the assassination of President Melchior Ndadaye.

Following the 2003 peace accord that saw FDD rebels share the power with the government, the father of six was named the deputy army chief of Burundi.

In 2006 he was named minister of the interior, before becoming Nkurunziza's military adviser and then secretary-general of the ruling CNDD-FDD party.

Hardliners Dominate Burundi's New Cabinet
Tagged:
Copyright © 2020 The New Times. All rights reserved. Distributed by AllAfrica Global Media (allAfrica.com). To contact the copyright holder directly for corrections — or for permission to republish or make other authorized use of this material, click here.