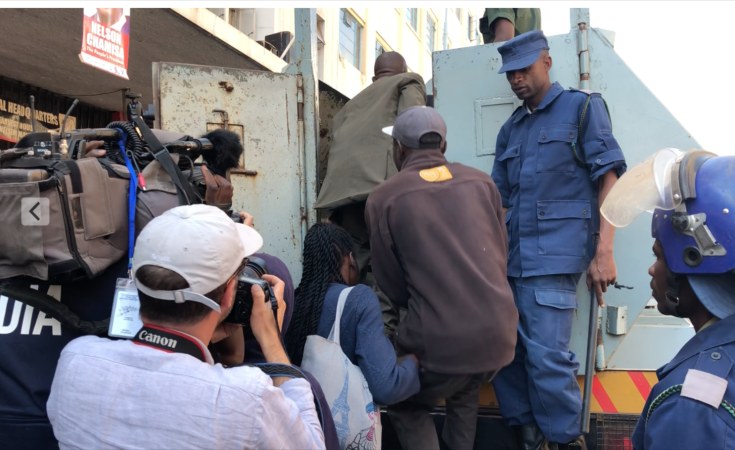 C. Mavhunga/VOA
Zimbabwe police apprehend people they had found inside opposition Movement for Democratic Change Alliance offices in Harare following a raid there, Aug. 2, 2018. The people were arrested for leading protests that turned violent.
Zimbabwe Standard (Harare)
By Blessed Mhlanga

Security forces have been accused of disrupting the economy through the chaotic implementation of Covid-19 lockdown regulations after they forced the closure of Bulawayo businesses without notice last week.

The following day they restricted entry into Kwekwe's CBD, amid claims by President Emmerson Mnangagwa's spokesperson George Charamba that a decision had been made to restrict people's movement after authorities received intelligence that the opposition was plotting protests.

There were also reports of police and soldiers manning roadblocks restricting entry into Harare CBD, even for people that had authorisation letters.

On June 17, the Employers' Confederation of Zimbabwe (Emcoz) wrote to Labour minister Paul Mavima complaining about the conduct of the police and soldiers deployed to enforce the lockdown.

"This letter serves to express our concern as business with respect to the disruption that is being caused to operations as a result of actions of security forces at roadblocks and checkpoints particularly in urban centres," read the letter.

The letter, signed by Emcoz president Israel Murefu, claimed police and soldiers had been turning away workers at roadblocks, forcing business to close down.

"We wish to put it on record that the conduct of security forces, which prima facie, do not appear to be in accordance with known Covid-19 lockdown regulations, is causing serious disruptions to business operations," read the letter.

A recent survey by the Confederation of Zimbabwe Industries revealed that the Covid-19 pandemic is weighing down on Zimbabwe's productive sector, amid warnings that some manufacturing companies are on the brink of collapse.

Low production and over-reliance on imports are haunting the country's economy and weighed down the local currency.

Murefu said the continued disruptions would have a negative effect on the economy.

"You would be aware that both the minister of Finance (Muthuli Ncube) and Reserve Bank of Zimbabwe governor (John Mangudya) are on record making the observation that our biggest problem leading to the current poor economic performance is lack of production or low utilisation," the letter added.