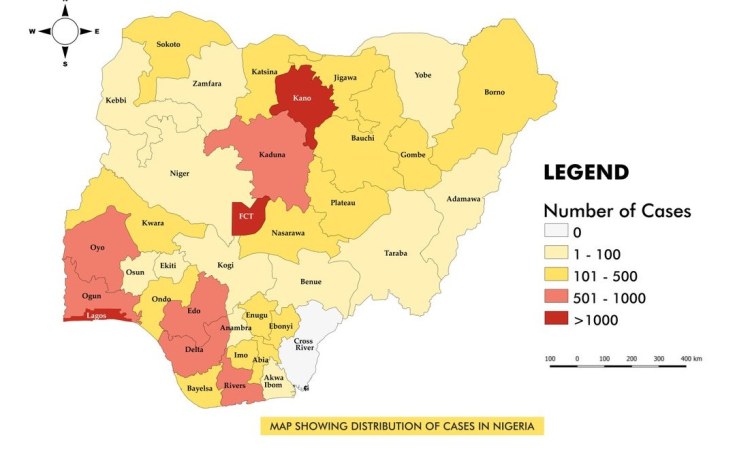 According to the Presidential Task Force (PTF) on COVID-19, this shows that Nigeria and Nigerians have a choice to make in acting to curtail the spread and impacts of the virus.

The Secretary to the Government of the Federation and PTF Chairman, Boss Mustapha, gave the warning in Abuja on Monday at the briefing of the task force.

He said, on Sunday, Nigeria crossed the threshold of 20,000 with the total number rising to 20,244 confirmed cases.

He said this signified that more testing had been carried out in recent weeks.

"At the beginning of June, the PTF announced a one-month period for the implementation of the second phase of eased lock down and that the task force has continued to monitor developments nationwide to take informed decisions at the end of the month.

"We've exactly eight days to that point of decision.

"While pursuing that line of action, the PTF will like to re-echo the WHO's advisory to countries and their citizens not to equate any slow-down in numbers, accompanied by loosening of restrictive measures to translate to a reduction in the dangers faced by humanity.

"However, we're not deluded that we're getting enough samples to test.

"I wish to remind all our citizens that the best strategy remains to test, detect, isolate and treat.

"That has accounted for the massive expansion in the laboratory network and testing centres," Mustapha said.

He added that: "Our failure to take responsibility threatens the gains we have recorded which is not good for our large population."

PTF National Coordinator, Dr Sani Aliyu, said many Nigerians only used their face masks either to avoid security agents where enforcement exists or where they are told to do so.

He said there was also significant disbelief in the danger and impact of COVID-19 in parts of the southeast where the PTF did a recent survey.

"60 percent did not believe that COVID-19 was an issue at all.

"We clearly are not taking the pandemic seriously enough," Aliyu said.

"As I said last week, today, now, you're more likely to contract COVID if you go out and do not observe the strict measures that we recommend far more than when this problem started three months ago, simply because of the numbers that we are currently having.

"We are also working very closely with security agencies as well as the state governments to try and introduce... acts that will enable us to make the use of face mask mandatory in the public space," Aliyu added.

Nigerian Senate Wants Almajiri Absorbed Into Formal Education
Tagged:
Copyright © 2020 Daily Trust. All rights reserved. Distributed by AllAfrica Global Media (allAfrica.com). To contact the copyright holder directly for corrections — or for permission to republish or make other authorized use of this material, click here.