Africa: The UN's Failure to Act On Race 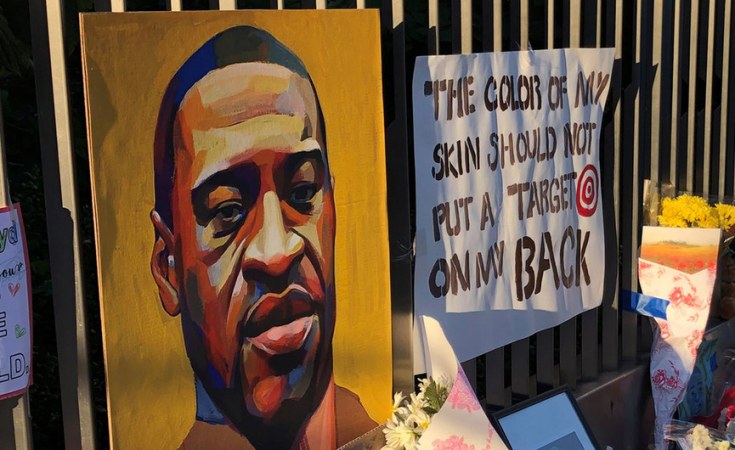 Daniel Dickinson/UN News
Tributes to George Floyd, an African American, was killed after being restrained by police in the United States.
Inter Press Service
opinion By Kwame Akonor

South Orange, New Jersey — Racism is not only an American problem but a plague that people of African descent have had to endure since time immemorial.

Rather than seizing this historic moment to act decisively, the United Nations, the world's highest platform for human rights, dithered on the issue when it was called on to establish a full commission of inquiry on race following the outrageous killing of George Floyd on May 25 2020.

That the African countries on the 47-member UN Human Rights Council (UNHRC) were cajoled by more powerful UN member states to soften its demand for such a commission should come as no surprise. African states are the largest regional group at the UN, yet it continues to play a peripheral role in global affairs.

In 1945, four African countries (Egypt, Ethiopia, Liberia, and the Union of South Africa) attended the San Francisco Conference and signed the UN Charter. Since then the number of African countries has increased, mainly due to decolonization, to 54 (28% of UN members).

Despite its current representation, Africa remains marginalized and powerless in the world body. As any student of international relations knows, real power in UN lies with the veto wielding five permanent members of the Security Council (China, France, Russia, the United Kingdom, and the United States).

African countries have a common vision for inclusion and expansion for two permanent and five non-permanent security council seats for Africa. Though it is not wedded to idea of a veto and would prefer its abolition, the African group maintains that for the sake of efficiency and equitable distribution of power all admitted permanent members should possess it.

The collective, however, cannot agree on which countries to recommend for permanent seats let alone those to be assigned veto powers. The three potential candidates mentioned as permanent members with veto rights are South Africa, Nigeria, and Egypt.

The inability of Africans to agree on the composition and mandate of its reform proposals have made it susceptible to the dictates and influence of western donor countries.

Be that it is, one can make the case that a meaningful structural reform of the Security Council that accords agency to Africa at the UN will not only be a pragmatic reflection of contemporary geopolitical realties but more importantly it will serve as a correction of the historic injustice done to Africa.

The UNHRC urgent debate opened in Geneva on June 15, 2020 and discussion on the Africa resolution began in earnest on June 17, 2020. The original proposal by the Africans specially called for an international investigation into the unarmed killing of blacks in America and the lack of accountability of police violence that results from such crimes, including police brutality against protesters.

In the end, a watered-down version of the resolution was adopted unanimously on June 19, 2020. Mention of the creation of full-fledged commission of inquiry was dropped and the scope of inquiry was broadened to go beyond America.

The final resolution recommended a mere fact-finding report on systemic racism and discrimination against black people to be prepared by the UNHRC chairperson and other experts and delivered in a year's time.

Though the US withdrew from the UNHRC in 2018, the final resolution passed because the US, the UN's biggest financial donor, was "the elephant in the room" calling the shots.

The US argued that while it was not above scrutiny, the UNCHR's attempt to single it out was hypocritical since authoritarian regimes in the world like Cuba, China, and Iran have systemic racial disparities in countries.

The western allies on the UNCHR, including Australia, Germany, Poland, and the European Union, were swayed by the US argument and thwarted the Africa efforts.

The adopted resolution is a disingenuous face-saving outcome: how can the UNHRC back away from its most intrusive scrutiny mechanism, the creation of commission of inquiry, to that of a report.

To make matters worse, the UNHRC assigned itself a full year for the completion of the report. It took just a week (June 22, 2020) for the reputable advocacy group Amnesty International to put together a comprehensive report "USA: End unlawful police violence against Black Lives Matter protests" on police brutality and the protest movement in America following the death of Mr. Floyd.

Credit however must be given to the African states for initiating the "urgent debate" on Mr. Floyd's murder and racial injustice and police impunity in the United States.

It is only the fifth time in the UNHRC 14-year history that such a debate has been convened: the first one against Israel over the flotilla incident in June 2010; and the other three on Syria, in February 2012, May 2013 and March 2018.

For a moment, it appeared the debate might not happen despite worldwide protests. First, UN activities had been suspended since the Covid-19 pandemic first struck in early March 2020.

Second, senior UN leadership vacillated on how to respond and sent conflicting messages to UN staffers on what role, if any, they could play.

Beyond using tweets, António Guterres, the current UN Secretary-General made no media appearance or formal remarks on the subject. Through his surrogates some guidance was provided.

On June 3, the UN effectively banned UN staff from engaging in peaceful protest stating that UN staff regulations makes the "participation in public demonstrations in the current circumstances may not be consistent with the independence and impartiality required of . . . international civil servants."

The contradiction between the UN ideals for civil rights and the prohibitive guidance that discourage action toward such ideals became evident.

Sensing the civil rights disconnect and dissatisfaction of the UN staff, the UN reversed course. Secretary-General Guterres on June 9, sent a letter to the UN staff and maintained that the earlier guidance was not a prescription for neutrality or impartiality on the matter at hand but rather that "the guidance was meant to emphasize the need to balance [protest] activities with one's best judgement as international civil servants and our official duties."

In order words, protest engagements could be carried out but in a solely private capacity. The guidance provided is quite timorous and stands in stark contrast to efforts by UN staffers who participated in protest movements of yesterday.

One such person is Ralph Bunche, a co-drafter of the UN Charter, the first African-American Nobel Peace laureate, in 1950, and an UN Under Secretary-General for Special Political Affairs who joined several civil rights protest marches, sometimes donning the UN flag and publicly pledging the UN support for the movement.

While not a panacea, a formal international investigation would have served as a clarion call to end and repair racial injustice and projected the UN as an agent of change to institutional racism.

It also would have signaled a firm commitment by the world organization to the promotion of fundamental freedoms for all persons as enshrined in the UN charter, the organization's constitution which was signed some seventy-five ago this month.

Kwame Akonor is an associate professor at Seton Hall University, where he teaches international relations and human rights.