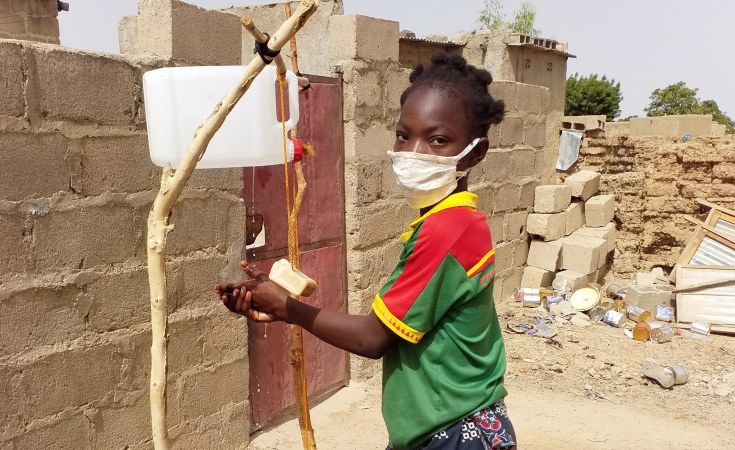 Plan International
14-year-old Roufaïata wanted to teach her classmates how to build a simple handwashing device called a ‘tippy tap’ and how to wash their hands properly.
Plan International (Woking)

With schools now starting to re-open in Burkina Faso after a long closure to reduce the spread of COVID-19, the first thing 14-year-old Roufaïata wanted to do was teach her classmates how build a simple handwashing device called a ‘tippy tap’ and how to wash their hands properly.

Roufaïata knew exactly what to do after taking part in one of Plan International’s hygiene awareness demonstrations along with 2,800 other families in the Centre-South region.

"I saw that the tippy tap was very useful at home and I thought that we should do the same thing at school," explains Roufaïata who is described by her mother as an imaginative, dynamic girl who helps with household chores when she doesn't have homework to do.

“Before, there was no soap at school to wash our hands. We were content with using water from buckets and kettles, but it took a lot of water. Some people put their hands directly into the bucket, so we had to throw the water away quite often and get more water. Eventually, our water supplies would run out,” says Roufaïata who is in the fifth grade.

Building a tippy tap requires a water container, string and pieces of wood, all of which Roufaïata was able to assemble in front of her 60 classmates and teacher, who was surprised by her knowledge.

"When we decided to build a tippy tap in front of our pupils, Roufaïata said she already knew how to do it. So, I let her take my place and she succeeded without any difficulty. She also demonstrated the correct handwashing technique to her classmates, with a perfect mastery of the different gestures," says Mr. Zongo the headmaster, who notes that from now on, everyone in his school will use the tippy tap devices to wash their hands regularly.

When it was announced that classes for children taking exams this year would resume on 1 June, the education authorities in Bazèga province, where Roufaïata and her family live, made 1,062 tippy taps available in 244 schools which have been installed with the support of Plan International.

Roufaiata and her classmates are now able to prepare for their exams in a safe and clean environment and Roufaiata does not hesitate to call out those she sees leaving the latrines without washing their hands.