Central African Republic: "We can build Africa without weapons" 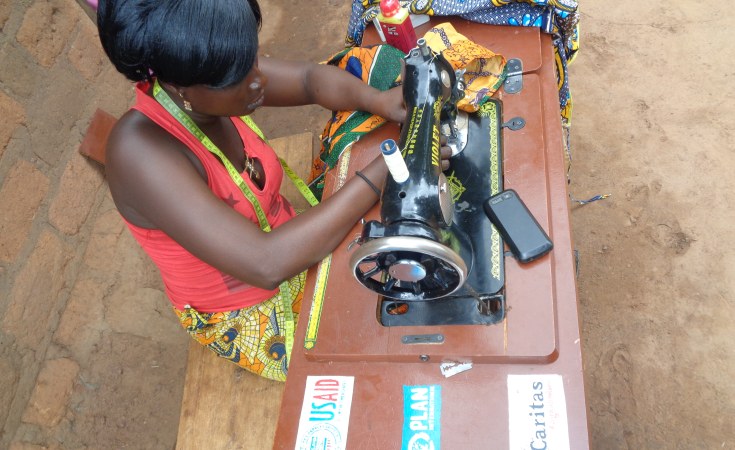 Plan International
Zara* was just ten years old when she joined an armed group in Central African Republic, one of the world’s poorest countries which has been engulfed in conflict since 2012
Plan International (Woking)

Zara* was just ten years old when she joined an armed group in Central African Republic, one of the world’s poorest countries which has been engulfed in conflict since 2012. "I joined the armed group in 2013. I thought it was the only path I could take to earn a living," says Zara, who is now 17.

The Central African Republic (CAR) has been called the most dangerous place in the world for children. Sectarian violence has ripped the country apart, killing tens of thousands of people and driving more than a million from their homes. With 80 percent of the country under the control of local warlords, thousands of children have been recruited by armed groups.

“It took two days before the chiefs decided to enrol me. They had to check to make sure I was not a spy or an enemy fighter. In my group, I was the one running errands. I also used carry war booty, then I graduated to a fighter.”

When her armed group disbanded, Zara and the other child recruits tried to return home, but their communities would no longer accept them because of their involvement with the conflict. They hid for months in the bush to avoid becoming targets for revenge.

"We were afraid to go out because we had committed a lot of crimes and people were ready to attack us. We lived a very precarious life in the bush, surviving by eating wild fruits," Zara recounts.

In March 2017, thanks to a partnership with USAID and Caritas, Plan International implemented a programme to help reintegrate children from armed groups back into society.

One of the approaches we use is to provide children with life skills and vocational training to enable them to earn a decent living and prevent them returning to the armed groups. More than 100 children have now received training, including Zara who learnt how to sew.

Each child is given a choice of three vocations – sewing, catering or running a small business. "I chose sewing because it's a job that can help me earn money easily to buy food and clothes,” Zara explains.

At the end of the training, the project provides the children with the equipment they need to start earning a living – in Zara’s case she received a sewing machine, material and threads.

Today, Zara works as a seamstress and is in high demand by her customers, since it is a rare profession in her community which is normally only practiced by men. “She is the only seamstress here. Her services are good and at a low cost," says Helene, one of Zara’s customers.

Zara says she is trying to be an example to others in her community and shares her experiences with younger children to warn them of the dangers of joining armed groups.

"I advise other children and girls not to accept being manipulated. I regret everything I did during the war and when I think about what I experienced; I am traumatised.

I tell all children, young people and girls specifically, never to take the path of weapons because with all that I went through and the change I am now experiencing in my life, I can testify that we can build Africa without weapons."