Sierra Leone: "You will be married, or you will leave my house" 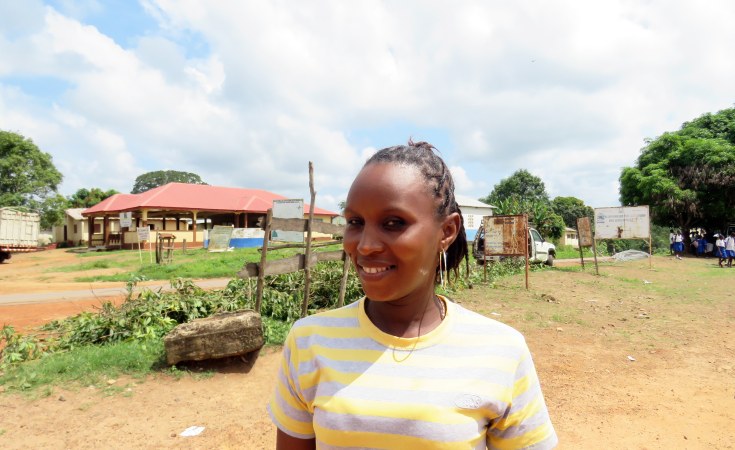 After eating her favourite meal of rice and cassava leaves, Aminata's father, who has taken care of her since her mother died when she was seven years old, said he wanted to speak to her. A man of few words, Aminata knew it must be something important. "It is time. Your elder sister went at this same time," he said. She wondered what he meant. "Your marriage suitor has approached me, and I have accepted."

At just 16 years old, Aminata was in shock. Her elder sister had married not long after their mother died, and her other sister lived with a relative far from home. Their house was always quiet, but they had become accustomed to their calm life.

"I hope he turns out to be as good as your sister's husband. Your sister was lucky and is very happy," her father continued. Suddenly Aminata felt a flash of anger, she stood up and shook her head. "I shouted back at him, "That was her! For me, I want to finish school. I will never marry while I am still this young!".

Her father was shocked by her outburst. They had lived a peaceful life together, and Aminata was a good child who never got into trouble. She was also one of the top students in her class. He was proud and happy of her, even though he never openly showed his happiness. He too stood up and walked towards her, standing close to her he said, "You will be married, or you will leave my house."

Aminata could not believe what she was hearing. "This was my father. Yes, a man of few words who loved me and had provided for me since my mother died," she says.

In Sierra Leone, child marriage is commonplace, forcing girls out of school and depriving them of learning and economic opportunities later in life. According to UNICEF, Sierra Leone has the 18th highest prevalence rate of child marriage in the world.

The following morning, Aminata went to see her married sister, where she did not get much support. "My sister said that she too had gone through the same ordeal and that her fate was also sealed early in life. My sister would not help me and said I could not stay at her house."

Aminata started walking, hoping to reach the house of one of her distant relatives. She walked for hours until she finally got to Kabala, the capital and largest town in Koinadugu District in the Northern Province. There, she reported her case to the Community Welfare Committee who agreed to intervene and meet her father to explain the Child Rights Act which sets the minimum age of marriage at 18, and the punishment he could face if he continued to force her to marry.

Her father agreed to halt Aminata's marriage, but he also stopped paying her school fees so she could no longer continue her education. Now aged 18, Aminata has been out of school for two years and lives with a relative, but she is hopeful that she will one day be able to finish her education one day.

Plan International's Girls' Education Challenge is working improve girls' lives through access to education. Funded by the UK's Department for International Development, the prgramme has so far benefitted more than 21,000 girls by increasing learning outcomes for girls and building the skills they need to progress.

"Plan International also works closely with Community-Based Child Protection committees to come up with strategies that will address child marriage in their communities," explains Evariste Sindayigaya, the Country Director of Plan International in Sierra Leone, adding that our advocacy engagement has resulted in the drafting of a bill that further addresses child marriage in Sierra Leone.

"We have also supported the development of a national strategy for vital statistics, and a review of the teachers' code of conduct to address sexual exploitation and other misconduct of teachers in school," says Mr Sindayigaya.