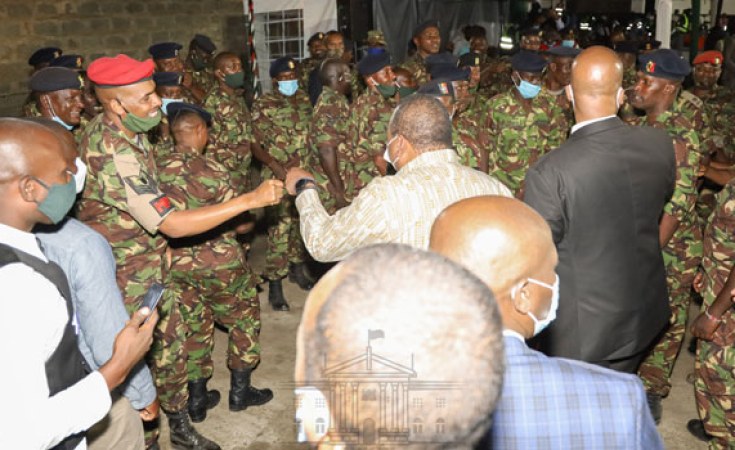 The Presidency/Capital FM
The head of state after speaking at the Nairobi Metropolitan Services garage in industrial area when he flagged off 83 vehicles that were rehabilitated by the state agency.
The Nation (Nairobi)
By Vincent Achuka

Confirmation of several Covid-19 cases in the National Police Service and in the Kenya Defence Forces (KDF) camps over the weekend poses a fresh challenge to healthcare teams fighting the virus.

In just four days, the coronavirus has jumped from the Kenya Prisons Service to the Kenya Police before hitting KDF, in essence touching virtually all the key disciplined forces in the country.

Kenya Prisons, which reported its first Covid-19 case on May 9, has largely put the virus under control within its facilities although a new case was reported at Mbale Prison over the weekend.

By yesterday, all the inmates and staff at Mbale Prison had been tested for the disease and are awaiting their results. Meanwhile, the prison, like all the others where the coronavirus has been reported, has been closed to the public.

But for KDF and the Kenya Police, dealing with the coronavirus among their officers while at the same time ensuring that the two forces continue discharging their duties could be an uphill task.

By Tuesday, KDF had tested more than 7,000 of officers and set up two designated Covid-19 treatment centres at Kabete Barracks in Nairobi and Mtongwe Ferry in Mombasa.

"Recognising that no one is immune to contracting the virus, and that there is no known cure or vaccine against Covid-19, the military has issued protocols to protect the force," KDF spokesperson Zipporah Kioko said.

"Disinfection of all offices and spaces within military establishments is also ongoing. The same has been extended to critical facilities and vulnerable neighbourhoods [as well as] ambulances, aircraft and police stations," she said.

Even as concerns are raised at the extent of infections in the forces, the military says figures of these infections are always included in the data announced during the daily national statistics through the Ministry of Health.

Sources have told the Nation that KDF's Kahawa and Embakasi barracks are facing the possibility of being placed under lockdown after dozens of officers tested positive for the virus.

A family spokesman, Mr Joseph Langat, told the Nation that the burial was attended by at most 15 people, including his colleagues, as villagers were kept away.

Mr Langat said public health officers had buried his brother at his Konoin home, in Olenguruone, Kuresoi South. Police ensured villagers were kept away as those attending the ceremony, among them close family members, observed Covid-19 health guidelines,"

Kenya Prisons banned prisoner and staff visits in April, something KDF can do but impossible to implement within the Kenya Police. This is because the public visit police stations round the clock.

Police spokesman Charles Owino said they are doing their best to control the disease while at the same time maintaining law and order. "We're in the frontline and quite susceptible because we're always in contact with the public. We can't stop people from coming to police stations to report crime," Mr Owino told the Nation.

"However we're trying our level best to adhere to Ministry of Health protocols like sanitising, keeping social distance and ensuring that we don't keep suspects in the police cells for long."

No Longer on Autopilot, the Governance of Nairobi Is In New Hands
Tagged:
Copyright © 2020 The Nation. All rights reserved. Distributed by AllAfrica Global Media (allAfrica.com). To contact the copyright holder directly for corrections — or for permission to republish or make other authorized use of this material, click here.