South Africa: 'It's Not the Right Time' - Cape Town Teachers Protest for Schools to Close Amid COVID-19 Peak 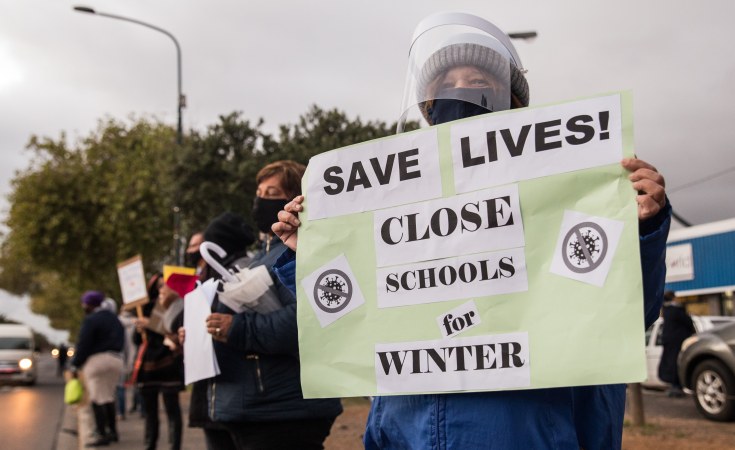 Ashraf Hendricks/GroundUp
Yolanda Jackson, a teacher at Portia Primary, said that she wants schools to only be fully open once the “peak” is over in the Western Cape.
News24Wire (Cape Town)
By Murray Williams

On Klipfontein Road in Athlone, small crowds gathered at several sets of traffic lights - to garner hoots of support from passing motorists.

Edward Ontong, a teacher at Mary Harding School in Athlone, said: "We are protesting because we want the Department of Education (Western Cape Education Department - WCED) to review its decision to have the schools re-opening and the learners returning, in the midst of the peak in the Western Cape, in the midst of winter. We are already seeing that many of our colleagues, in places like Paarl and places like Athlone, have contracted the disease - and some of our colleagues have already died.

"We just feel it's not the right time to have the learners back at school. It's going to seriously aggravate the situation," Ontong warned.

A teacher at nearby Athlone High, Clement Meyer, said: "This is a premature opening of the schools. It's totally suicidal... while the infections are accelerating. It's a health risk for the schools and the communities."

He warned that if schools remained open, the virus would "spread like wildfire".

A colleague at the same school, Bradley Snayer, said this was "an incredibly infectious time".

"We understand that schools need to open and we agree with that. But it's the timing. And we feel we are being ignored. People are dying, teachers are dying, kids are dying. We're not saying our plight is more important than others. But we think it is irresponsible for those in power to be sending us back at this time. All we want is for our voices to be heard," Snayer pleaded.

A local resident Mohamed Kaprey spent his morning handing out mini-South African flags to protesting teachers on Klipfontein Road. He said he supported the call for schools to close, and demanded "principals be principled" and protect teachers.

"The risk of getting Covid at home is high. At school it's even higher because different children come from different houses, and the teachers must come together... "

"Why can't we wait until next year? In 1980 we boycotted - I lost a year of schooling. In 1985 I lost a year of schooling. This is tantamount to genocide. We are sending children to the gallows here," he said. "I am not an educated man," he admitted, but alleged: "The national government are a bunch of pensioners, sitting and deciding on the future of our youth, and future leaders."

On Wednesday, GroundUp reported principals from Heathfield, Steenberg, Floreat and Athlone high schools wrote to President Cyril Ramaphosa last week asking the government to review the decision - and that schools only reopen once the peak of Covid-19 has passed.

The WCED said it would issue a new response on Thursday.

Director of Communications Bronagh Hammond said previously: "The Head of Department did reply to the letter last week. The letters reminded SGBs that it falls outside the mandate and functions of an SGB to close a school. This authority lies with the Head of Department.

"While Covid-19 is a reality and creates a lot of fear and anxiety, we also have a duty to fulfil in education and to protect learners' right to education. The national Minister of Basic Education, in consultation with the National Coronavirus Command Centre (NCCC) announced that schools would open on 1 June 2020 for Grades 7 and 12, to be followed by the gradual phasing in of more Grades on 6 July 2020 and 3 August 2020 respectively. The opening of schools in the province must be seen within this context.

"There are over 1 400 schools operating every day in this province - where teaching and learning is taking place following the necessary safety precautions," Hammond said.

"Section 20(1)(a) of SASA stipulates that a governing body of a public school must promote the best interests of the school and strive to ensure its development through the provision of quality education for all learners of the schools.

"The WCED will always strive to protect every child in its care, Similarly, every parent has the right to send his/her child to school to receive an education," Hammond said.

COVID-19 Forces 'Tough Decisions' on South Africa
Tagged:
Copyright © 2020 News24Wire. All rights reserved. Distributed by AllAfrica Global Media (allAfrica.com). To contact the copyright holder directly for corrections — or for permission to republish or make other authorized use of this material, click here.