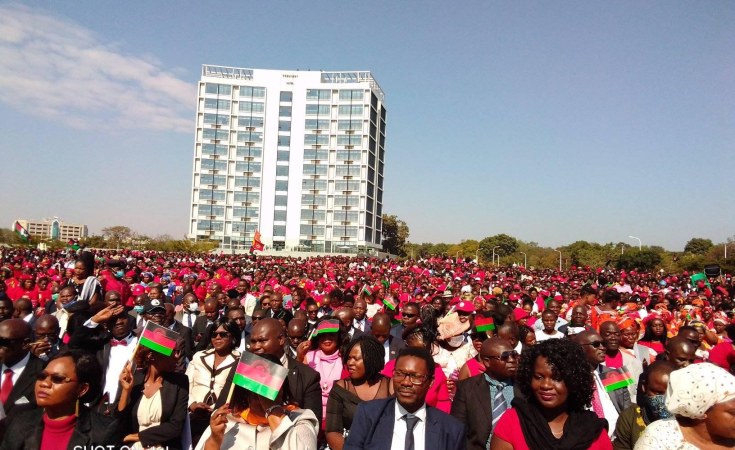 Tonse Alliance torch-bearer Dr. Lazarus Chakwera was on Sunday sworn in as the sixth President of Malawi, alongside his running mate Dr. Saulos Chilima as Vice President, at a colourful ceremony held  at Bingu International Conference Centre (BICC) in Lilongwe.

Chakwera, who was sworn in by Chief Justice Andrew Nyirenda, beat his main rival Professor Arthur Peter Mutharika of the DPP-UDF Alliance by over 800,000 votes and garnering 58.75 of the vote. Mutharika received 39 % of the vote.

Making his acceptance speech, President Chakwera said it was a great honour to carry the hopes and aspirations of the country.

"Fellow Malawi citizens, it is an honour to stand here as your President. The spirit of our founders as far back as 1964 and the zeal of those who fought for democracy was a dream for a Malawi that is enjoyable by all," said President Chakwera.

The Malawi Leader emphasized that unity should be embodied for prosperity of the entire nation saying, "we should be the ones who enjoy the bounty mother Malawi provides not a privileged few."

The President said we should wake up from slumber and work diligently to serve Malawi. He acknowledges the challenges most people face such as lack of electricity, potable water, good schools and hunger. He said the aspirations of Malawians would only be realised through good governance.

"Corruption, poverty and enrichment of the few should not have a place in a new Malawi.

"When growing up there was a government that was eager to provide for its citizens. This is the aspiration that we will pursue in a new Malawi. I and Dr. Chilima will work together towards fulfilling dreams of millions of Malawians," said Dr. Chakwera.

Dr. Chakwera triumphed in the June 23 Fresh Presidential Election after the High Court of Malawi nullified the May 2019 Presidential election, a decision which was upheld by the Supreme Court of Appeal.

Read the original article on MBC.

Opposition Leader Sworn in As President After Repeat Vote

Forced Retirement of Malawi's Chief Justice Withdrawn By New Govt
Tagged:
Copyright © 2020 Malawi Broadcasting Corporation. All rights reserved. Distributed by AllAfrica Global Media (allAfrica.com). To contact the copyright holder directly for corrections — or for permission to republish or make other authorized use of this material, click here.