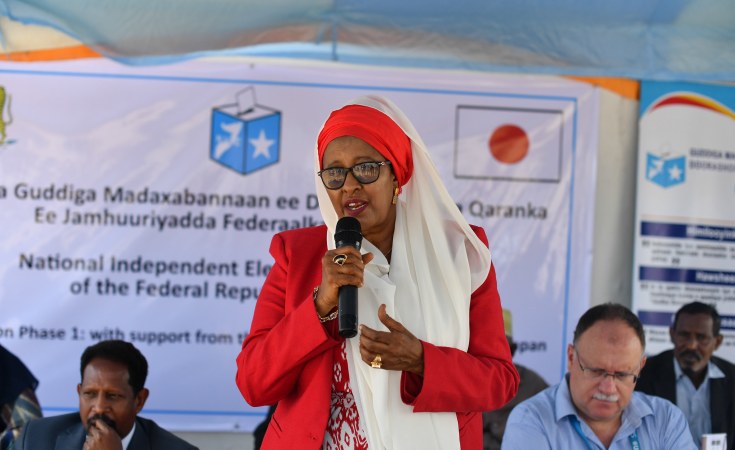 Omar Abdisalan/UN Photo
Halima Ismail Ibrahim, the Chairperson of Somalia's National Independent Electoral Commission, speaks at a ceremony to inaugurate the perimeter wall for the future office of the commission in Mogadishu on 26 March 2018. UN Photo /
Voice of America (Washington, DC)
By Harun Maruf

Somalia’s electoral commission has announced that upcoming parliamentary and presidential elections will not take place on time, as scheduled.

The chairperson of the National Independent Electoral Commission (NIEC), Halima Ismail Ibrahim, has told the Lower House of the parliament that political differences, insecurity, flooding and COVID-19 have hampered the commission’s work schedule.

The parliamentary elections were scheduled for Nov. 27; the president’s term ends on Feb. 8, 2021. Ibrahim says neither deadline can be met.

More than 6 million Somalis are estimated to be eligible to vote, half of the country’s population, but the commission targeted registering fewer because of security and logistical constraints. The commission proposed the registration of up to 3 million voters biometrically, the creation of 5,000 polling stations, and vowed to hold the election in one day. Ibrahim told the parliament that this process requires nearly $70 million, which the NIEC does not yet have.

“Therefore, we would like to state before the parliament and the Somali people that elections based on the biometric system is not possible to be held according to the scheduled time of November 27, 2020, due to the reasons mentioned above,” she said.

She said this type of election could only take place in 13 months starting from July 2020 and ending by August 2021.

Ibrahim proposed a second option with a quicker timeline. She proposed conducting a same-day manual registration of voters with the registration of 3 million and 5,000 polling stations, which costs $46 million. But she said this process will also need nine months to prepare, starting from July 2020 and ending by March 2021.

But the move to postpone the election earned swift denunciation from the country’s main opposition umbrella. The Forum for National Parties (FNP), which brings together six political parties, has called on the electoral commission to resign for failing to hold the election on schedule.

In a statement, the FNP accused the NIEC of collaborating with the current government on term extension.

“The forum will not accept to unlawfully delay the election even one day,” read the statement.

“Not what we expected,” said former President Hassan Sheikh Mohamud, a member of the FNP, to the media. “We were not expecting them to come up with term extension, and to create political cloud.”

Commissioner Ibrahim has rejected the calls from the opposition to resign. She said NIEC did not have a complete electoral law and resources needed in order to hold the elections on time.

“We would have resigned if they have given us an electoral law, a political agreement and resources and then tell us to go and hold an election,” she said. “We have not had that.”

The president of Somalia signed an election law in February, but it is incomplete because it does not define four key major portions – distribution of seats in constituencies, quota for women, allocation of seats for Mogadishu in the Upper House of Parliament, and modalities for electing lawmakers who will be representing Somaliland. So far two of those provisions, the quota for women and seats for Mogadishu have been approved by the parliament.

Holding elections also needs political agreement between stakeholders in Somalia, as the commission and the international community demanded.

Last week, President Mohamed Abdullahi Farmajo invited all regional leaders to attend a meeting, July 5-8 in Mogadishu, in an attempt to solve the differences.

Hassan Kafi Qoyste contributed to this report from Mogadishu.