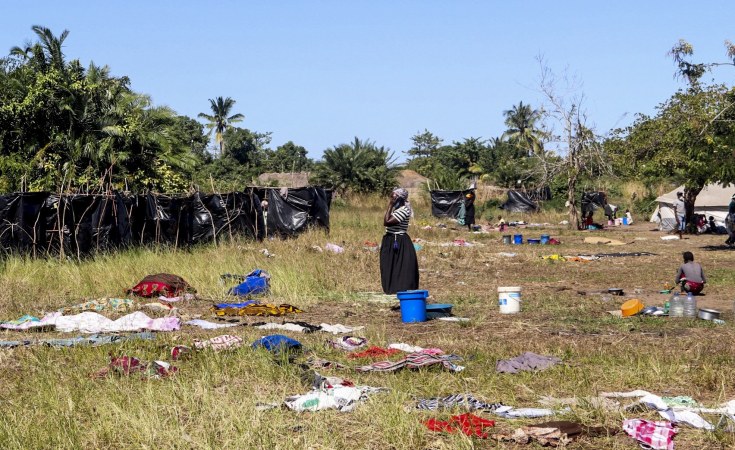 MSF
A woman stands in field where clothes are dried after washing in Metuge, Cabo Delgado Province. Make shift displace person camps have formed after a series of attacks has forced thousands to flee the north region.
Agencia de Informacao de Mocambique (Maputo)

Maputo — Terrorists attacked the town of Mocimboa da Praia, in the northern Mozambican province of Cabo Delgado on Saturday morning, according to a report in the independent newssheet "Carta de Mocambique".

Mocimboa da Praia is where the jihadist violence began, with attacks on police installations in October 2017. Three months ago, in March, terrorists invaded the town and held it for a day.

This time, heavy fighting was reported between the islamists and the Mozambican defence and security forces. No details are yet available of deaths or injuries on either side.

A second newssheet "Mediafax" reports that the first attack took place at about 04.00 on Saturday morning. Units of the defence forces stationed in Mocimboa da Praia fought back, and repelled the raiders. A significant number of the terrorists were reportedly killed.

But several hours later the jihadists returned with larger and more powerful reinforcements. Some areas of the town were occupied for a period, and in this bout of fighting a senior Mozambican commander is said to have lost his life.

"Mediafax" reports that air support, from at least four helicopters, proved determinant in ensuring that the town did not fall into terrorist hands.

Many of the residents of the town fled into the bush, or took to boats for the relative safety of the sea.