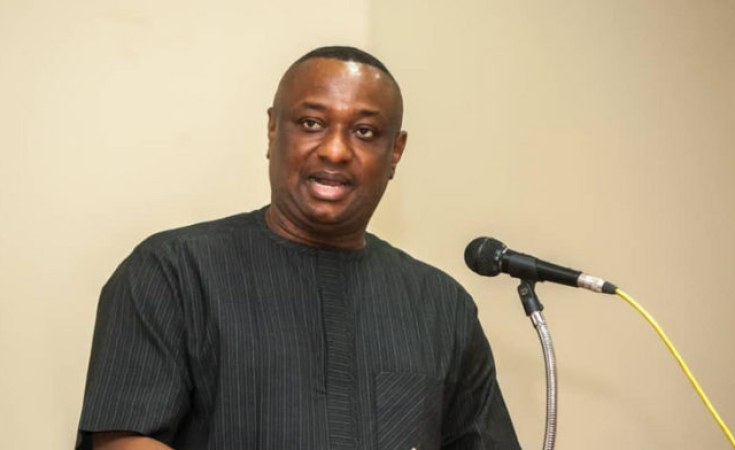 Federal Ministry of Information and Culture
Nigerian Minister of State for Labour and Employment Festus Keyamo.
This Day (Lagos)
By Onyebuchi Ezigbo

Abuja — The Minister of State for Labour and Employment, Mr. Festus Keyamo, has accused some political leaders of attempting to blackmail him into surrendering the innovative public works job creation programme meant to create 774,000 unskilled jobs.

He, however, vowed that only President Muhammadu Buhari who appointed him can stop him from piloting the programme to a successful conclusion.

Speaking in Abuja yesterday at the inauguration of state selection committees of the federal government's public works programme, Keyamo warned the state chairmen not to compromise on the objective of the initiative to give the opportunity to the people.

He said any chairman that failed to adhere to the guidelines on the operation of the scheme would be removed.

"There have been attempts at blackmailing me in this particular programme too to make us also yield to political leaders and we have said no - not while I am here.

"Except Mr. President, who appointed me stops me, and who gave me the opportunity and rare privilege to drive this programme, except he stops me, no other political leader or person can stop me. I am answerable only to Mr. President," he said.

The minister added that in the past, it used to be that certain people entrusted with such a programme would hand them over to political leaders as a form of patronage.

According to Keyamo, the public works programme is for all Nigerians and the federal government has structured it to be bipartisan in order to reach out to every Nigerian, irrespective of political leanings.

He said: "Before coming here today, there has been an attempt by certain political leaders to say I must come and see them behind the scenes first to determine who gets what and how, and I said no! I am ready at any time for a public debate on this with them.

"Ordinary Nigerians must have access to this programme. Those who are thinking I must come and see them behind the scene to determine who gets what and how they get it, I am saying no; I will not do that.

"I think the chairmen can stand on their own; don't go and hold meetings in the house of politicians to select; hold your meetings in NDE offices. Don't go and meet in any government house to hold any meeting, don't go to any politicians' house to do selections."

Keyamo explained that the programme, which is to run between October and December, would be supervised by the ministry through the National Directorate of Employment (NDE).

He said each participant in the public works programme would be paid N20,000 and a total of N60,000 for the three months.

While admonishing the state chairmen of the programme to be fair and avoid being compromised, the minister said: "Nobody should be given more than we allotted to the person. We are going to be strict in allotting to different sectors: civil society, market women wait for those directives; so, nobody should intimidate the chairmen. I know the chairmen will stand their ground; I am also here to back them up. We are going to remove anybody who is dancing to the tune of anybody and undermining the drive of this programme.

"All my life, I have fought for good governance; I have gone to court to ensure that things are done right when out of government. That is what gave me my name and pedigree before I came into government and I have a practice to go back to. I want to reach the zenith of my profession.

"So, nobody will come and dictate to me the work that Mr. President told me to do. So, I cannot come into government and then abandon all the principles I fought for while I was out of government. I will not do that. Any attempt to intimidate or blackmail us here we will not give in except Mr. President tells me to stop then I will stop."

The minister added that in order to prevent undue interference in the selection process, the government has set aside 15 per cent of the slots from each local government area for political office holders.

A total of 111 members of the state selection committees with 20 from each state and the Federal Capital Territory charged with the responsibility of compiling the list of 1,000 participants from each of the 774 LGAs in the country were virtually inaugurated.

Why We Disengaged 500,000 N-Power Beneficiaries - Govt