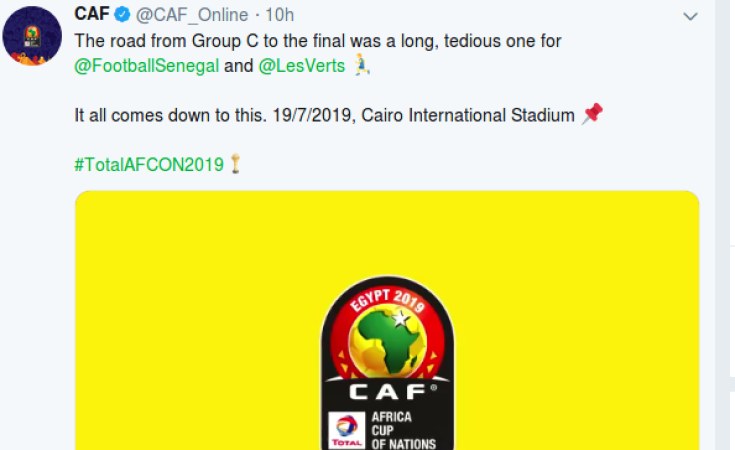 The Confederation of African Football has moved the Africa Cup of Nations originally meant to take place between January and February 2021 to 2022.

The AFCON 2021 postponement is top on the list of other decisions agreed upon during the CAF Executive Committee meeting held via zoom conferencing on Tuesday.

With just two of the six qualifying rounds played, CAF deemed it unrealistic given the current situation to have the remaining qualification phase and have the biennial tournament in January next year.

The predicted CAF decision follows UEFA's decision to move the 2020 European Championship to next year, and CONMEBOL's decision to delay the 2020 Copa America to 2021 too.

The coronavirus pandemic across the world has disrupted the sporting calendar with top events including the Tokyo Olympic Games postponed while others were outrightly cancelled.

Nigeria is hoping to win the next AFCON tournament and has expressly told the country's national team coach Gernot Rohr to do so or risk losing his job. The target is contained in Rohr's new two-and-a-half-year contract.

Apart from announcing the AFCON 2021 postponement, CAF's executive committee also confirmed that African Nations Championship (CHAN) has been moved to next year.

The CHAN tournament is meant for players plying their trade in their country's respective domestic league.

After emerging as runner's up in the last edition, Nigeria failed to qualify for this next edition now billed to take place in 2021.

Also, it was agreed on Tuesday the CAF Champions League semi-final fixtures will now just be one match instead of two-legged ties, and the same goes for the CAF Confederation Cup.

Nigeria does not have any team left in both the CAF Champions League as well as the Confederation Cup.

Only one (Enyimba) of the four flag bearers this season in continental football made it as far as the quarter-final stage.

For the women, CAF announced the outright cancellation of the 2020 African Women Cup of Nations (AWCON) but also announced the continent's Women's Champions League will take off in 2021.