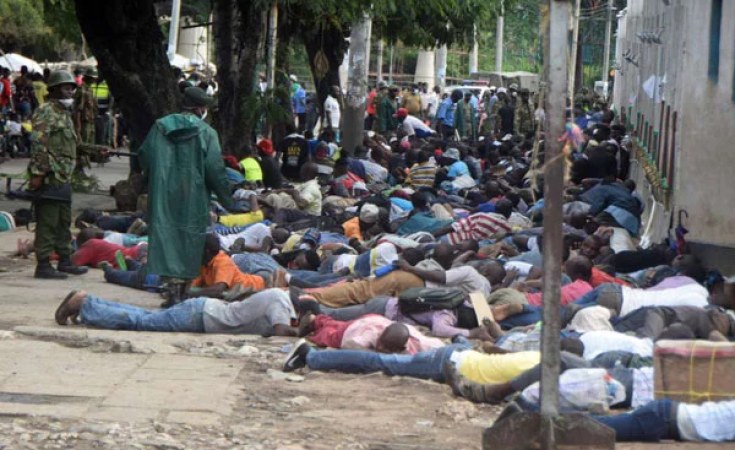 Laban Walloga/Nation
Some of the ferry passengers who were cornered by police on day one of the curfew over the novel coronavirus.
Capital FM (Nairobi)
By Joseph Muraya

Nairobi — A new report by the Kenya National Commission on Human Rights (KNCHR) has put the National Police Service and other state agencies on spot over rights violations during the COVID-19 pandemic.

The report published on Tuesday dubbed "Pain and Pandemic: Unmasking the State of Human Rights in Kenya in Containment of the COVID -19 Pandemic," which assessed the State's response over the past 100 days, covers 9 thematic areas affected by the pandemic among them access to justice and enforcement of COVID-19 containment measures.

KNCHR CEO Dr Bernard Mogesa said the police were ranked as the top violators of human rights at 59 per cent followed by other State actors at 40 per cent.

Such cases include, "high incidences of violation of economic social cultural rights as well."

During the period, the State commission documented 10 deaths caused by police officers and 87 cases of human rights abuse - still by the law enforcers.

The Independent Policing Oversight Authority (IPOA) in a statement issued on June 26 said 87 complaints against police officers reported since end of March, when heightened security measures were put in place to combat the spread of Covid-19 pandemic and in particular, the dusk-to-dawn curfew, were under review.

A preliminary probe on the complaints, IPOA Chairperson Anne Makori said, had linked 15 deaths and 31 incidents of assault to police officers.

The report further put the government on the spot for a myriad of issues among them forceful evictions of people for example in Kariobangi and Ruai areas in Nairobi.

Speaking when she released the report to journalists on Tuesday, KNCHR Director of Research, Advocacy and Outreach Anne-Marie Okutuyi said there's need to strengthen law enforcement agencies through capacity building to ensure that they enforce regulations within the law and uphold human rights standards.

Further, the reported recommended that the National Emergency and Response Committee on COVID-19 prioritizes and strengthens actions aimed at cushioning vulnerable persons against marginalization.

The report however recognized six police officers for their exemplary services to Kenyans during the COVID-19 pandemic, the report indicating the officers' actions promoted human rights despite the grim picture on the police and other state agencies.

Those honoured include Baringo Central Administration Police Commandant Ibrahim Abachilla and Amina Ramadan, an officer from Embakasi Police Station, who were recognized for their unique way of enforcing the curfew without breaching human rights.

The police commandant was seen sanitizing members of the public who had contravened the dusk-to-dawn curfew order and educating them on the importance of doing so.

Ramadan was seen escorting a young mother to safety while carrying her handbag.

The OCPD and OCS of Mumias Police Station who took a victim with speech and hearing impairment to hospital were also commended.

The others are OCS and Deputy OCS of Akala Police Station who accompanied an injured victim of police brutality to hospital.