Kenya: How a Group of Turkana Herders Became Vegetable Farmers 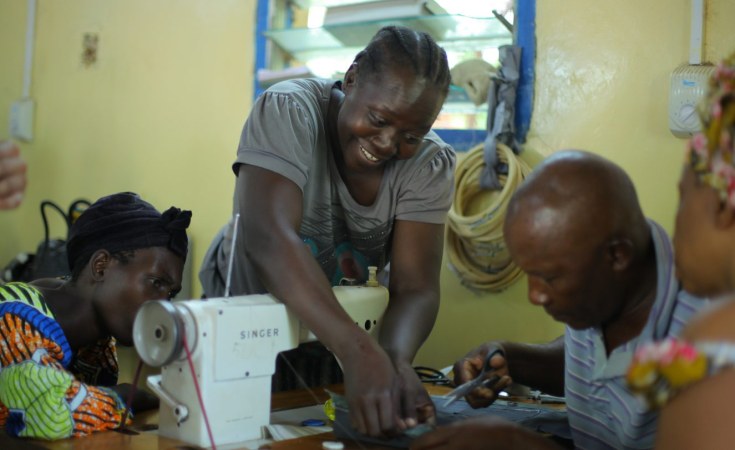 UNHCR/S.Otieno
Natiira's herders-turned-farmers are growing food for their families and, with some of the surplus, are supplying nurtitious food to the large Kakuma refugee camp, where Agnes Abalo (center) trains with classmates during a money-earning project to make tote bags for national and international sale. The refugee courses are supported by the United Nations High Commissioner for Refugees, the Lutheran World Federation and the Nairobi non-governmental organization Heshima Kenya.
allAfrica.com
interview By Nancy Onyango

Nairobi — Natiira Ateni Self Help Group was formed in August 2014 in northwest Kenya, near the borders of South Sudan and Uganda. The community group was launched by former pastoralists who had lost their livelihoods after their herds were diminished by cattle raiders. Wycliffe Juma, a management specialist at the consulting group CEZAM, has worked with the group since 2017 to help administer an ambitious expansion project, supported with funds from the United States African Development Foundation (USADF). AllAfrica's Nancy Onyango talked to Juma about the community that has transitioned itself from pastoralism to crop farming. (AllAfrica's interviews are edited for clarity and length.)

How did Natiira Self Help Group start?

Natiira Ateni Self Help Group was formed as a savings group by former pastoralists who had lost their livelihoods after losing their cattle during frequent raids from South Sudan and from Pokot and Samburu counties in Kenya.In 2014, the Kenyan government began training pastoralists through the ministry of agriculture, as an alternative to rearing livestock. Natiira Ateni was one of the groups that was lucky to be trained. After the training, they began practicing rain-fed agriculture, which was not sustainable. Turkana county is an arid area with only two to three months of rain every year. Drought destroyed their crops, and they began seeking support to ensure all-year supply of water in their farms.

Natiira applied for a USADF grant [approximately $95,400 over a two-year period] - and [it] helped them address their challenges. They drilled and equipped a borehole and also set up a drip irrigation system, which ensured they get regular water supply throughout the year for crop production.

Insecurity is rampant in Turkana county. Why is this so?

What impact does the Kakuma refugee camp have on the project?

Kakuma town and Kakuma Refugee Camp are 20 kilometres away from the Natiira irrigation project. Kakuma Refugee Camp is one of the biggest refugee camps in Kenya [with a population of nearly 200,000]. So it has also contributed a lot to the growth of Kakuma town, which is densely populated. Due to its proximity, our members sell fresh produce in Kakuma town, both to the refugees and the locals.

What is the age group of the members in the group?

The age of members in the group ranges from 25 to 68. The majority - 80 percent - are women. The men in the town mostly leave and seek work in neighbouring towns like Kakuma and Lodwar. Others also have traveled to look for jobs in Nairobi [the Kenyan capital, over 700 kilometres south].

How did a previously pastoralist group transition to crop farming as a source of its livelihood?

Yes, the majority of people in the Turkana area are just pure pastoralists. The members of the self-help group diversified into agriculture because they wanted to diversify their sources of income. They initially relied on livestock, but two things could happen. One, when there was extreme drought and famine, members could lose all their livestock. Also, when there were raids, people could be left dead and their animals stolen. And because the raiders usually target homesteads with big animals, the people wanted to reduce the number of animals they keep and to fill the gap with agricultural produce. Agricultural products are safe, because the cattle rustlers will never target farm produce. So by keeping less animals, they were kept safe from the raids, and they could also provide vegetables to the surrounding community, which were initially being brought from Kitale. Kitale is 500 kilometres away from Natiira. So they saw the need to tap into that market, since there was no one else who was producing vegetables in the area.

What has been your involvement with the group as CEZAM?

CEZAM [as USADF's local implementing partner in Kenya] offers technical support to Natiira. So when project development is being done, we help the community to analyze their markets, to analyze the technology that they are using to make sure it is a viable one, and also to help them develop financial projections. We train them on how to manage their finances, so that they are able to analyze their operations and make sure that they are making profit. We also help evaluate the vendors that are involved in the project tenders. We assist during the recruitment of the consultants they want to engage in capacity-building initiatives

What has been the impact to the community so far?

The impacts are many. The change of mind-set alone is a big impact in a community that was predominantly pastoralist. Now they are able to embrace agriculture. They have the new skills of using drip irrigation and growing crops as a new source of livelihood.

The farmers in the village are able to generate extra income from agriculture, which they are now using to meet other basic needs, such as improving their shelter, sending their children to school and meeting their medical expenses. Nutrition has improved, as the community is not only relying on meat and milk as their primary diet, but now eating fresh foodstuffs such as spinach, kale, okra and groundnut (peanuts). The community does not have to rely on vegetable supplies all the way from Kitale. Whenever it rained, the food trucks could not make it to Natiira due to poor infrastructure. This has since changed, as the community can now grow its own food and supply neighbouring towns with its surplus.

The farming project has also brought some peace and calm in a community which was frequently attacked by cattle rustlers. The diversification from pastoralism has created a vibrant environment, and communities that had once fled the area after being raided are now inspired to return to their homes.

What does the future hold for Natiira?

The future plan is for Natiira is to expand. The group hopes to engage more community members who are still relying on rearing livestock or rain-fed agriculture as their main source of income.

The current USADF support has enabled the group to farm two acres of land. The group is saving proceeds from their fresh produce sales, and their hope in future is that they will be able to get other partners so they can increase the area under cultivation to more than ten acres.

Currently, the neighbouring towns are still reliant on farm produce from towns such as Eldoret and Kitale. A bigger farm will enable them to supply the community of Natiira, Lokichogio and Kakuma with vegetables. Natiira aspires to showcase to the rest of the country how they have attained food security in an arid terrain.