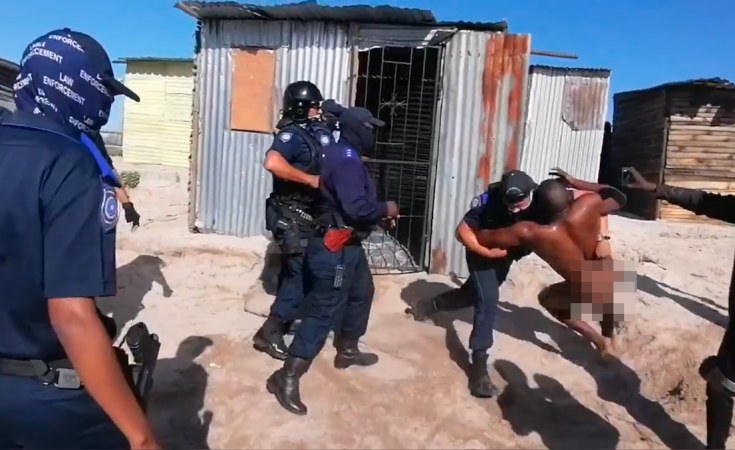 Bonga Zamisa/Facebook
A naked man was dragged from his shack by law enforcement officers when at least 4 homes in eThembeni were demolished despite a moratorium on evictions during the COVID-19 lockdown.
Government of South Africa (Pretoria)
press release

Minister of Human Settlements, Water and Sanitation, Lindiwe Sisulu has condemned a distasteful incident in which a man is seen on video footage being dragged out of his shack naked. The unfortunate incident took place in Thembeni informal settlements in Cape Town.

"While we are yet to be appraised of the exact details of what led to what we have seen on various media platforms; we wish to condemn with the strongest terms an act which sought to degrade an individual like what we have witnessed. The act is inhumane and has no place in our democratic South Africa," said Sisulu.

The Minister has on several occasions warned people planning to or have already invaded properties to desist from such unlawful acts. The incidents of land invasions have been a regular occurrence in the Western Cape, Gauteng and KwaZulu Natal. However, no matter the circumstances, there is no reason for such behaviour on the people tasked with enforcing the law.

"We are calling on the Western Cape Government to urgently get to the bottom of the incident and to hold accountable those implicated for their deplorable actions. The violation of someone's dignity has no place in a democratic South Africa", said Sisulu.

Minister Sisulu is Playing Dirty Politics with Our Lives and Dignity