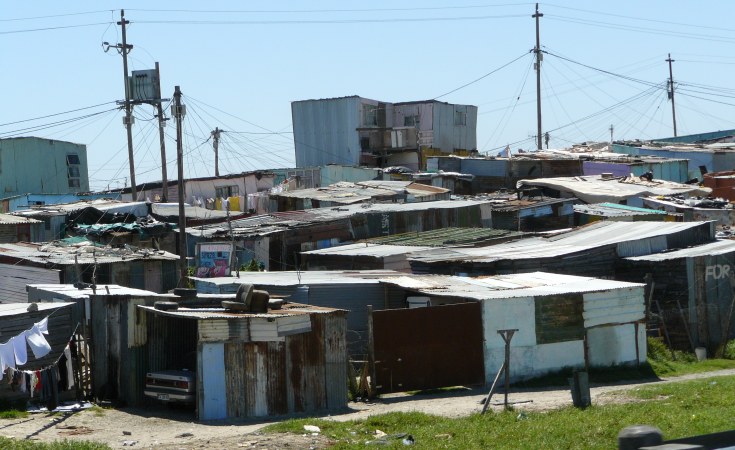 Responding to outrage over South African police dragging a naked man from his shack to demolish it, a government watchdog said on Thursday that it will go to court to challenge such evictions.

In a video that went viral, four policemen grappled with Bulelani Qholani and pushed him to the ground as they destroyed his tiny home while he was bathing on Wednesday in Cape Town's Khayelitsha township. The officers have been suspended.

"What happened yesterday was despicable and a direct attack on people's right to housing."

South Africa - a hotspot for the new coronavirus on the continent - issued a directive that municipalities must suspend all evictions and water cuts during a lockdown that began on 27 March, with restrictions gradually being eased in recent weeks.

The pandemic has exposed stark divisions between largely black, overcrowded and unsanitary townships, which have seen high rates of infection, and richer white-dominated areas, in one of the most unequal countries in the world.

At least 800 evictions have taken place during the three-month lockdown, said Edward Molopi, a researcher with the Socio-Economic Rights Institute of South Africa, which uses litigation and advocacy to support human rights.

Cape Town Mayor Dan Plato condemned the officers' conduct but said that the city was responding to the erection of illegally built structures.

"This particular area in Khayelitsha was illegally invaded during the first weeks of the national lockdown ... and has been earmarked for the installation of services for the surrounding community," he said in a statement.

The city was taken to court in April over its demolition of about 50 shacks in Khayelitsha and ordered to return building materials to evicted residents so that they could rebuild some of their demolished homes on the same land.

Housing rights campaigners say many poor renters have been unable to work under stay-at-home orders, with little financial protection in place, in a country where affordable housing is in short supply.

"They were responding to a need (by building shacks)," said Buhle Booi, an organiser from the housing rights charity Ndifuna Ukwazi who witnessed the demolition.

"The lack of affordable housing talks to the history of this country. Apartheid confined poor, Black people to the city's periphery without basic services and nothing has changed."

(Reporting by Kim Harrisberg @KimHarrisberg; Editing by Katy Migiro. The Thomson Reuters Foundation is charitable arm of Thomson Reuters, and covers the lives of people around the world who struggle to live freely or fairly. Visit http://news.trust.org)

Minister Sisulu is Playing Dirty Politics with Our Lives and Dignity