Kenya: 2.7 Million Kenyans May Be Exposed to COVID-19, Study Shows 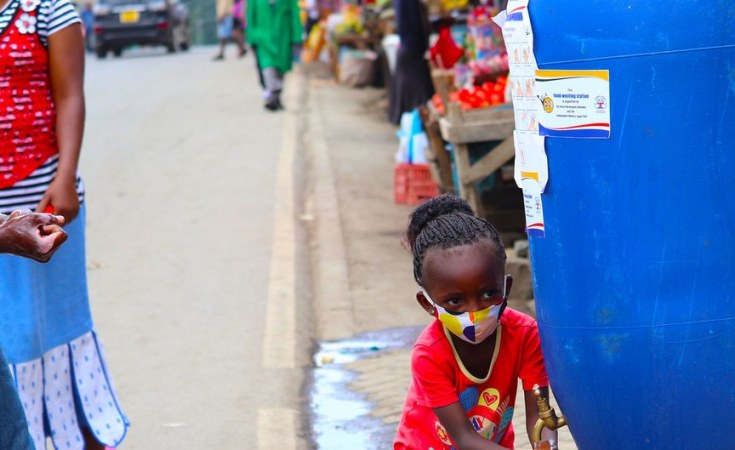 Isaac Muasa/UN Habitat
COVID-19 protection measures have been put in place at an informal settlement in Nairobi, Kenya.
The Citizen (Dar es Salaam)

Scientists estimate that 2.7 million Kenyans could have been exposed to the novel coronavirus, many of them much earlier than when the first positive case was reported in the country.

Blood samples from several places across the country show that there could be a huge gap between confirmed cases and the number of people exposed to coronavirus.

The data is contained in a study by the Kenya Medical Research Institute and Wellcome Trust.

Researchers found that around 550,000 (12.4 percent) Nairobi residents out of about 4.4 million had built up an immune response long before the first Covid-19 case was announced in the country on March 13.

In Mombasa where chances of getting infected with the respiratory infections are highest, the team of scientists estimates that 100,000 (8.6 percent) people could have been exposed to Covid-19.

Random testing of 2,535 blood samples donated between April 30 and June 16 suggests many more Kenyans have already been exposed to Covid-19 than have been identified by surveillance activities.

The results on antibody prevalence from blood donor samples raise the prospect that many Kenyans who never knew they had been infected had already encountered the virus and survived.

"There is a large gap between the confirmed cases identified by rapid response teams in testing and tracing, and the numbers of individuals in the population that we believe have been exposed based on antibody data," notes the study.

While the team of scientists said that the large numbers of the population that have been exposed would lead models to predict significant numbers of severe cases and deaths, county hospitals in which monitoring for pneumonia admissions is established are not seeing high numbers of admissions.

Data from the National Registry of Diseases shows that when Kenya reported the first case of coronavirus on March 13, there was a spike in pneumonia, one of the complications of severe Covid-19.

Between January and early February, the number of pneumonia cases was 137,667 before a dramatic increase to 195,504. The pattern -- an increase from January and then a plateau -- is not similar for the same period in 2019.

Globally, some 11 million people have tested positive for the coronavirus and more than 550,000 deaths have been recorded.

Normal PCR tests on throat and nose swabs only reveal active infection and cannot reveal people who have recovered from infection. By July 1, the government had conducted 173,355 PCR tests, out of which 6,673 turned positive.

"Testing a sample of the population for antibodies tells us how many people have already been exposed to the virus at some time in the past," reads the study.

The team estimates that the prevalence of antibodies to SARS-CoV-2 among blood donors in Kenya ranged from 1.1 percent in Uasin Gishu county to 12.4 percent in Nairobi county. The data further reveals that more people in Rift Valley region (500,000) compared to the western region (400,000) have been exposed to Covid-19. Interestingly, there is no data from the northern parts of the country.

While this latest study is important because blood donors are a convenient sample of the community, it acknowledges that "we may not be representatively sampling the country's population."

The researchers say accurate antibody testing is critical in helping determine when and how to begin restarting the economy and sending Kenyans back to work.

"Testing a sample of the population for antibodies tells us how many people have been exposed to the virus," it says.

Kenya's reopening will be informed by the measures put in place and the level of preparedness exhibited by the various counties, President Uhuru Kenyatta said in a meeting with governors.

Mr Kenyatta said the government's decision to reopen the country's economy will be determined by counties' capacity to effectively respond to new cases of Covid-19 within their borders.

As African countries begin to reopen borders and air spaces, the World Health Organization (WHO) Africa region warned that it is crucial that governments take effective measures to mitigate the risk of a surge in infections due to the resumption of commercial flights and airport operations.

Many African governments acted swiftly, implementing confinement and travel restrictions in the early days of the pandemic. In the WHO African region, 36 countries closed their borders to international travel, eight suspended flights from countries with high Covid-19 transmission, and others had partial or no restrictions.

So far Cameroon, Equatorial Guinea, Tanzania, and Zambia have resumed commercial flights as the 15-member Economic Community of West African States is expected to open their airspace on July 21.

While open borders are vital for the free flow of goods and people, initial analysis by WHO found that lockdowns along with public health measures reduced the spread of Covid-19.

"Air travel is vital to the economic health of countries. But as we take to the skies again, we cannot let our guard down. Our new normal still requires stringent measures to stem the spread of Covid-19," said Dr Matshidiso Moeti, WHO Regional Director for Africa.

Even with border restrictions, imported cases have sometimes brought back the outbreak to countries which had not reported cases for a length of time. For example, Seychelles had not had a locally transmitted case since April 6 but in the last week 66 new cases - all crew members of an international fishing vessel - have been recorded.