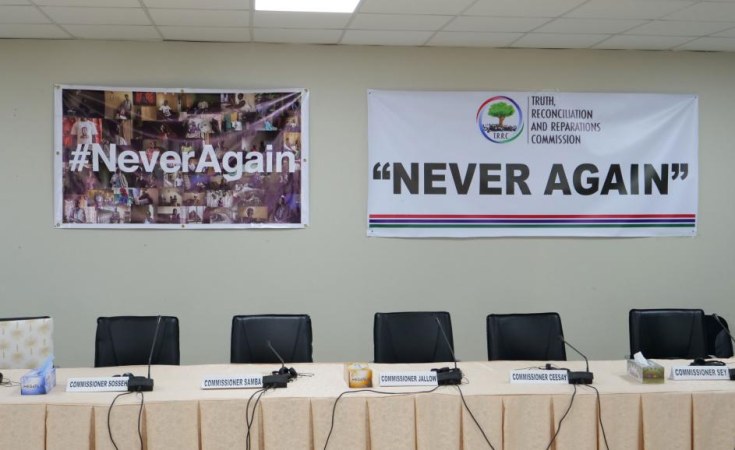 State House, Banjul, July 2, 2020 - His Excellency, President Adama Barrow has appealed for unity in preserving peace and stability of the country, as the new Attorney General and Minister of Justice takes oath of office today.

The President said maintaining peace and stability in the country hinges on respect for the rule of law and allowing the law enforcement officers to perform their duties without hindrance.

"Once again, I appeal to all Gambians to unite and be law-abiding citizens. Let us remain united. Unity fosters peace and prevents crime and disorder," urges President Barrow.

He described Gambians as "a diverse people", maintaining that such diversity should not breed hate or hostility. "Instead," he said, "it should be a source of inspiration, pride and strength in building peace and strengthening social cohesion. Therefore, let us stand united as proud Gambians."

The President recalled that in February 2017, he presided over the swearing-in ceremony of the members of his first Cabinet. Among them was Honourable Abubacarr Marie Tambadou.

"As a team, we pledged to execute relevant institutional and legal reforms, and committed ourselves to transforming The Gambia into a fully-fledged democracy for the overall development of the people," he recounted.

Today, he expressed pride that Mr. Tambadou does not only leave behind an indelible mark on The Gambia's legal reform programme, but also made a name for himself.

"This occasion affords me the opportunity to thank him for his selfless service to the nation. Despite the many challenges that confronted us from the outset, we have been able to weather the storm this far. On behalf of the entire nation, I thank Honourable Tambadou and wish him luck in his endeavours," he added.

To Dawda Jallow who just been sworn as Minister of Justice, President Barrow said his appointment comes at a time when his government is solidifying the democratic foundations built to establish a just and peaceful nation. Such foundations are also marked by the rule of law, respect for human rights and human dignity.

He noted that the Justice and Judiciary sectors have been playing a lead role in this direction. However, in spite of the progress made so far, he noted that more needs to be done to complete the legal reform process that begun within this vital sector.

"It is a common belief that good governance in any democratic environment must always be grounded in equal rights, justice and the rule of law. This is not attainable in the absence of a strong judicial and justice system, staffed by competent professionals under impartial and upright leadership," the President argued.

He expressed trust that Honourable Jallow will build on the work of his predecessor, and contribute to strengthening the Justice sector for the realisation of government reform objectives and national goals.

Honourable Dawda Jallow in his statement thanked the president for appointing him to serve the country and the government. He assured him of his "absolute and diligent dedication to duty at all times."

Will Gambia's Transition Stay On Course as Justice Minister Quits?

U.S. Moves to Seize Ex-Gambia Leader Jammeh's Mansion
Tagged:
Copyright © 2020 The Point. All rights reserved. Distributed by AllAfrica Global Media (allAfrica.com). To contact the copyright holder directly for corrections — or for permission to republish or make other authorized use of this material, click here.