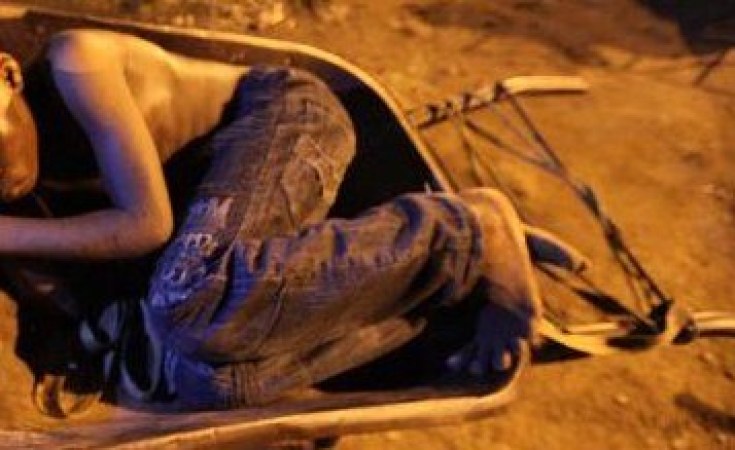 Langbasa in Eti-Osa Local Government Area of Lagos State is a paradox. While it provides a safe haven for some notable personalities, it is equally a community filled with many Nigerians battling for survival, even before the outbreak of coronavirus.

Afsat Agbomabini, a 55-years-old widow and mother of two children, is one of the latter.

When PREMIUM TIMES visited the community around 5 p.m. on June 24, she sat dejectedly, in front of her rented 'face me and face you' apartment, which was badly in need of improvement. Its dingy bricks were streaked by the constant dripping of water from the gutter.

Dressed in a faded 'ankara' wrapper and an old T-shirt, she shared her situation with our correspondent. Her immediate problem was how she would feed her daughter that evening.

Mrs Agbomabini is a hairdresser who had been able to sustain her family but the pandemic has rendered her despondent.

"After I lost my husband three years ago, my hair-dressing job helped me to cater for our basic needs; even my daughter was attending one of the privately owned primary schools in the community. Even though I don't have a shop, I was able to pay my daughter's school fees but since the outbreak of the virus, we have been suffering."

She told PREMIUM TIMES that since the outbreak of coronavirus, her business has been greatly affected, leaving her to go through hell to feed herself and Suliat - her 10-year-old primary five daughter.

Her 16-year-old son, Yusuf, had been 'adopted' by his boss where he is currently learning to become a bricklayer, she said. Her son appears to be luckier than the many children seen by this correspondent, who roamed aimlessly.

Referring to the children, Mrs Agbomabini said things were bad enough before but the pandemic made life more terrible for the community especially the children and widows.

For Mrs Agbomabini and other widows the reporters spoke with, their major problem is survival.

She narrates: "My husband died three years ago in an auto accident and since then I have been made to carry my cross but things became worse during this coronavirus period. Before my husband's death, he was working as a driver to a man in Chevron. He had an accident and died alongside his boss.

"I was driven out of our former house because I could not pay the house rent of our two-bedroom flat in Jakande. My elder brother gathered small money to rent a room for me here. He has been paying the rent."

Asked if she was able to get any government palliative during lockdown, she responded: "you know the type of government we have in Nigeria. The influential few got it when they brought the palliatives to Langbasa Primary School. Some people even fell down when they tried to lobby for their own share of the 'two congos' of rice distributed.

"The reason why I am sitting here is to find a familiar face that I can call to help me with N200 so that I can get akara (bean cake) and bread for dinner. Life is not fair to us and the authorities are also not fair to us. It cannot be this bad if my husband were to be alive. I hope 'Corona' would go soon so that I would be going to customers' houses to make hair for them because I don't have a shop."

In her late 40s and a mother of three, starvation is kept at bay by the benevolence of friends. Having lost her job as a cleaner in a private school at Sangotedo, she now does petty domestic chores for people to make ends meet.

"I used to work as a cleaner in a school at Sangotedo. The first problem I had was transportation," she said. "The Keke napep guys hiked transportation fees. Before coronavirus, I used to spend N400 on transportation daily but it became N800 because of coronavirus. I could not cope because I was receiving N20,000 as salary. I later lost the job."

After Mrs Sani was dismissed because of the closure of schools due to the lockdown, she had challenges feeding her family before she got another cleaning job. Now she visits homes to help people wash clothes.

When PREMIUM TIMES enquired whether or not she had benefited from the palliatives, her response was not encouraging.

"I have been sacked from work. Authorities are not considering us at this period. I got palliatives once. Thanks to those that are giving me the opportunity to wash their clothes, I feed my three children with that. I lost my husband long ago. They should not allow us to die. We eat just once in a day. This is not the best time for the poor, especially for widows with children to cater for."

Abbass Oyeyemi the founder of Reaching Minds Foundation, an initiative that deals with the minorities, outlines the hardship poor widows now go through.

He said: "In Nigeria, widowhood signals poverty. In most cases, once the breadwinner is dead, the house foundation becomes weakened, poverty scatters the home and the members of the family give in to destitution."

Speaking further to PREMIUM TIMES, Mr Oyeyemi explained that "coronavirus has exposed numerous deficiencies in our society but none is as deadly as poverty amongst widows. While these widows should have been given priority during the sharing of palliatives for the vulnerable, they were sidelined on the basis of which political party they belong to."

Another vulnerable group in Nigeria, which has equally been burdened by the fallout of COVID-19, is the physically challenged.

According to United Nations, about 80 per cent of people living with disabilities live in abject poverty. This situation has, however, been worsened since the onset of the pandemic.

PREMIUM TIMES spoke with Adebukola Adebayo, Chairman of the Joint National Association of Persons with Disabilities in Lagos.

Mr Adebayo, who spoke on behalf of his members, explained how they are being adversely affected by COVID19. "We are among those most vulnerable to COVID-19 and its various implications."

"The isolation centres put in place, are not designed to help the minorities. In view of the lockdown, many of us living with disabilities could not access our various medical services and some people who needed regular therapy for survival, could not get it.

"They died during this period. As I speak to you, we've lost some of our members to death, not because they contracted COVID-19 but because they could not get access to necessary medical services."

Lamenting further, he said. "Beside the health implications, there are social and economic implications. So many of us are poor. We cannot afford very expensive means of transportation. Many of us have been psychologically down and lost means of livelihood. The real issue is hunger, most especially for many that rely on begging for money. Even our organisation cannot function to help them."

"We need strategic intervention. We are not happy. We are suffering without meaningful support. No one is representing the interest of persons with disabilities. This is sad because we are not allowed to speak for ourselves."

For Mr Adebayo, all is not lost, even in these challenging times, if government makes more effort to establish and strengthen its intervention agencies.

"At the composition of the COVID-19 response team, the authorities ought to have selected one of us. We should be included in the taskforce so we can tackle the various challenges we face," he said. "When we are not there, we are easily forgotten. Let's take care of the institution problem. If we have functional agencies and laws in place, there won't be any problem. The disabilities blueprint should be everywhere. Without this, we will continue to be marginalised."

Speaking on post-COVID-19 era, Mr Oyeyemi, said: "There's a need for the government to take proactive steps to have a good database which would be used in empowering widows to set up Small Medium Enterprises as a means of sustainable development."

'We are doing our best'

When PREMIUM TIMES contacted the minister of women affairs and social development, Pauline Tallen, her assistant, Jummai Idonije, said the ministry is doing its best to address the issues.

"We have asked them (widows) to register at their state ministries so that we can capture them on our database. The minister is trying all she can to help widows. Even on International Widows day, she used her personal funds to cater for some."

She said the ministry of humanitarian affairs is handling the distribution of palliatives and "I can tell you that those that are captured in our database are being taken care of".

To further confirm measures put in place by the Lagos State Government, this newspaper reached out to the commissioner for women affairs and poverty alleviation, Bolaji Dada.

However, efforts by this correspondent to speak with her were unsuccessful as she did not respond to several calls and text messages put across to her as of the time of filing report.

This report was facilitated by the Wole Soyinka Centre for Investigative Journalism (WSCIJ) under its COVID-19 Reality Check project.