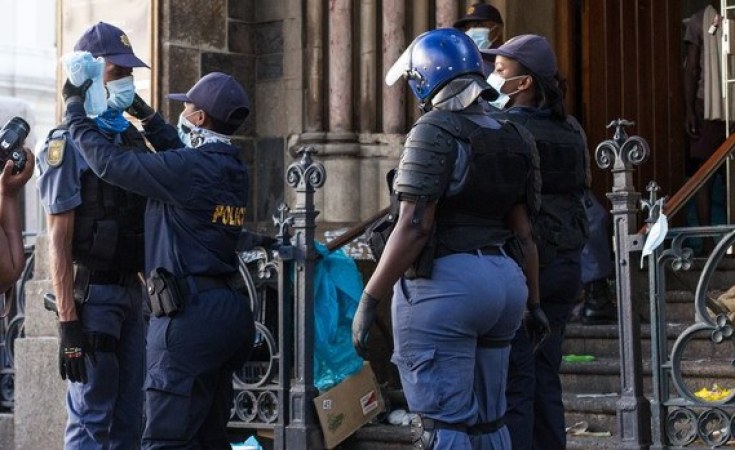 If you have been the victim of a crime, one of the first interactions you'll have with police is when an officer takes your sworn statement. Language is key to this process: you tell an officer your story, and they record it, usually writing it by hand.

But this becomes complicated in any multilingual society. South Africa, for instance, has 11 official languages and many other spoken languages. This often throws up a language barrier between the officer taking the statement and the victim sharing their story.

And it gets even more complex because despite the country's diversity of languages, English is the sole official language of record. All sworn statements are to be recorded in English. That means the onus is on the police officer to be as proficient in reading, writing and speaking English as a mother tongue speaker of the language. This, in a country where English is only the sixth most commonly spoken home language.

That makes it highly unlikely that either the officer taking the statement or the victim giving it speak English fluently.

Most South African police officers receive no language or literacy courses before qualifying. In fact, police in the country need only fulfil the requirements of six months' worth of basic training - the major elements of which are a driver's licence and a matriculation certificate that attests to the completion of schooling. There is no need for any post school qualification.

Police officers are also not, and are not expected to be, sworn translators or interpreters. This has serious implications for justice. In South African law, a statement takes precedence over any oral narrative when evidence is led in court.

An officer may misunderstand elements of the victim's statement, badly paraphrase an accused person's account of events, or choose to exclude information because they are not properly taught to listen to and sort it. But this flawed written statement will contradict the accused or a victim's oral testimony, bringing the facts of the case and a witness's credibility into question, even when an interpreter is present at trial.

The system needs an overhaul. Linguistic training for police officers, as well as proper resources for interpretation services, must be prioritised and implemented.

Linguistically the process of taking a sworn statement is quite complex. It combines translation, where more than one language is spoken, with retelling and reconstruction. The police officer must synthesise everything he's being told to ensure the facts are accurately recorded, a process called subjective synthesis. By doing all of this, the police officer is acting as an transpreter: simultaneously a translator of written text and an interpreter of oral communication.

Police officers can hardly be blamed for not being trained in this process. It's the system that enables the lack of training. The South African Police Services' draft language policy makes no mention of properly training officers. Instead, it states that a trained interpreter may be called to a station to assist if it's practical and money is available.

In reality, this rarely happens. Police officers are largely left to their own devices, acting as transpreters without training. This has real life consequences, as seen in the high profile rape and human trafficking trial of Eastern Cape pastor Timothy Omotoso. In the first trial (from which the judge eventually recused himself; a second trial has not yet started), one of Omotoso's accusers, Cheryl Zondi, was continuously asked during cross-examination why her oral evidence did not correlate with her written statement. Zondi suggested that these questions should be directed to the police, saying:

Why don't you ask the police officer why that was recorded as such in the statement - I didn't say that.

The current model of translation or retelling and rewriting of pre-statements into actual statements has a long history in the South African criminal justice system. Historically, it benefited English and Afrikaans speakers and put African language speakers at a real disadvantage.

Today, it is mostly English speakers who benefit. In the current system English acts to silence speakers who are not conversant in or comfortable enough to speak the de facto language of the criminal justice system. Instead, the (usually untrained) transpreter's "voice" dominates.

So, what can be done to begin shifting the system? Police statement taking is problematic in many multilingual legal systems.

In some countries, like Australia, forensic linguists have been employed to work alongside the police, helping officers to capture statements and training them on best practice models.

Elsewhere - for instance in Belgium and the Canadian province of New Brunswick, police officers are trained bilingually. They are then deployed to areas based on their linguistic competencies. Not only are statements captured in two languages: judicial officers must be fluent in those languages, too. So these languages are prioritised at each step of the justice process.

Ideally, South Africa should begin by developing police officers' current language skills in their mother tongues. Statements can be captured digitally in these languages, then translated into English for trial. This will ensure that the initial statements capture the facts accurately without being lost in translation. Contemporary computer technologies should be considered when facilitating the translation of sworn statements.