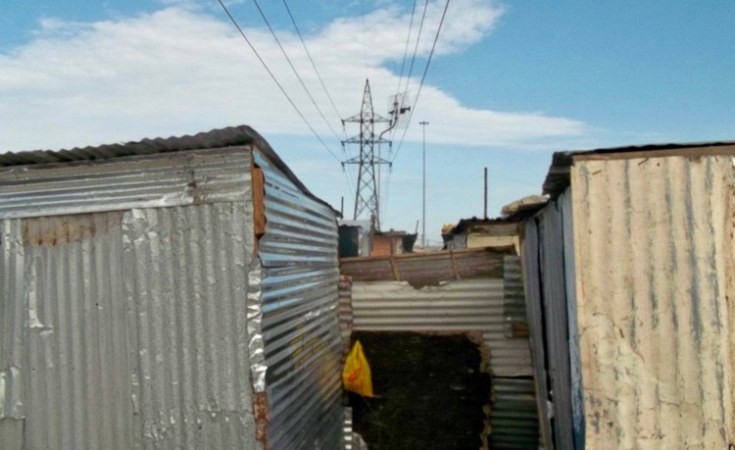 Creating a road blockade from felled trees was the only way Zweledinga residents in Port Elizabeth felt they could draw attention to their plight after the municipality disconnected their electricity.

Life is difficult in small, remote shack settlements. More so during a pandemic, when the nearest clinic is an expensive R47 round trip away, not a single health worker visits and the municipality abruptly disconnects the supply of electricity to the area.

The 400 residents of Zweledinga, a shack settlement 27km from Port Elizabeth in the Eastern Cape, have barricaded the main road in the area with giant, felled gum trees in protest at being left with nothing but two taps, one chemical toilet for every five families and a few solar-powered street lights to see them through the coronavirus outbreak.

Zweledinga is just 2km from a privately owned lion park, a nature reserve and the middle-class coastal suburbs of Seaview and Clarendon Marine. It was founded more than 30 years ago in a milkwood tree forest by black farm workers who had been evicted from the nearby farms. For decades, the municipality and provincial government has promised the residents houses, sewerage and electricity, but these have never materialised.

"We were evicted 20 years ago and had to come here. My family has been living in the Seaview area for generations. The situation is quite dire, to say the truth. I cannot count how many letters we have sent to the municipality. We have been sent from pillar to post for 36 years. Our parents died here without seeing any progress. Covid-19 forced us to blockade the road. How can this city be named after Nelson Mandela when it neglects its own citizens?" said Bob Wine, 49, one of the Zweledinga committee members.

The only electricity Zweledinga has ever had comes from mini solar panels on the roof of each shack, which generate enough power to charge a cellphone and power three lights. A German development agency donated the solar panels several years ago, but many no longer work. So earlier this year, the committee connected the settlement informally to a power supply at a nearby pump station. For six months, residents were at last able to cook on electric hotplates, plug in laptops to work and run their fridges. Until the municipality disconnected them in mid-June, sparking the protest that has seen the road blocked off since 23 June.

Sibusiso Titise, 28, was born in the settlement. "I have lived here all my life. I am really struggling to get an easy life. It is difficult here for us as youth. The youth in Seaview and Clarendon Marine get everything easily. It is very unfair. If we have laptops, we cannot use them because there is no electricity. My rights are totally not equal to theirs. It is like I am an exile in my country," he said.

"They do not appreciate all the effort, then they do not deserve any more food parcels. Who will now fix the roads, potholes will be damaging our cars," wrote Melinda Kolesky Smith.

Hester Koekemoer said, "If get everything for free you don't know the value of the people that donate [sic]. They made sacrifices and yet you destroyed the infrastructures." Jurg van Oselen opined bluntly, "no more charity". Venessa Versfeld said, "What wonderful thanks for the Xmas presents and donations and food supplied locally by Seaview/Beachview residents."

Committee member Mziwonke Futuse, 46, has lived in the shack settlement for the past 22 years. "All in all, we want permanent electricity because we are going to stay here forever. Those whites have the tendency to say we need to work hard and we don't appreciate what we have. Why must we thank them? For giving us food parcels during Covid-19?"

Wine agrees. "These people are bloody racist and if someone has been a racist for more than 30 years, he is not going to change. We and our fathers built those big houses in Seaview and Clarendon Marine, but now we are being seen as people who need a handout and want to get something for free."

One of the reasons the government has given for not upgrading Zweledinga is an environmental impact assessment (EIA) report that says the sewerage and water pipes cannot be installed through the forest. But, says Wine, "at Clarendon Marine and Seaview, lots of milkwood trees were removed for people with deep pockets to build big houses. We do not have deep pockets. We are just ordinary people suffering."

The residents of Zweledinga are a tightknit community. Everybody knows each other and nobody can move in without approval.

"Our grandparents were all chased away from white farms around here. Cattle, pig and flower farms. We have a rule that only people from the nearby farms can move in here, if they are accepted by the community. Our crime rate is not even 1%. You can leave your car here for days and nobody will touch it. We are trusted people and the committee has to account for everything to the community," explains Sibusiso Titise, 28.

Committee member Msira Barends, 38, said residents are extremely worried that without electricity, school pupils and university students can no longer do their online lessons or submit assignments. There is not yet a coronavirus case that the community knows of, and they say they really don't know what they will do if anyone does contract Covid-19.

The other worry is that residents are not taking their chronic medication because without casual work during the government's lockdown, they can no longer afford the R47 taxi fare to the clinic and back.

"Most of us are defaulting on our pills. A lot of us have diabetes, TB [tuberculosis], HIV and high blood pressure. We'd be very happy if about 10 of us could be trained to screen for coronavirus. We could stand at the entrance and take peoples' temperatures when they come from town," added Wine.

Welile Gonqoba, 63, has a daughter who is confined to a wheelchair in their shack. She has the use of only one of her hands. "One day when I am out, my shack could burn and my daughter won't be able to escape. We haven't got nothing, and the council has made so many promises but doesn't do anything. That's why we organised the electricity ourselves."

All talk, no action

Zweledinga residents say they cannot count on their DA councillor, Jason Grobelaar. "Our councillor is abysmal. He has failed us. We are deeply disappointed and angry that he made no effort to address our problems," said Barends.

Grobelaar said the EFF, United Democratic Movement (UDM) and ANC are to blame, not the DA. He said that when the DA was in power, the party made sure that the "council approved an amount of R35 million in June 2017 to purchase the land on which the houses needed to be built and ± one month after this, the EFF, ANC, UDM and their partners voted the DA out and put [the UDM's Mongameli] Bobani as mayor and the ANC in charge of human settlements and electricity. The new government has neglected the work we did and everything has been standing still since then [three years since the ANC took over these portfolios]."

New Frame put this allegation to the office of the mayor and hadn't received a response at the time of publication.

But Janet Cherry, head of the development studies department at Nelson Mandela University, said that before the DA came into power in the city, the community and university had already jointly devised a "sustainable settlement" project in 2013. They aimed to build eco-friendly houses, water and sewerage systems and provide renewable energy for Zweledinga's residents.

"The government promised this community 20 years ago that they would not be moved. We worked with the community to come up with a proposal for housing and services without destroying the forest. We presented the plan to the provincial government and the Nelson Mandela Bay council, and they just ignored it," said Cherry.

Instead of forging ahead with the eco-village, the municipality suddenly bought another piece of land nearby, promising Zweledinga residents houses there. But this land was later found to be unusable. The municipality then said it had run out of money to buy a usable piece of land.

Barends said the municipality promised to visit the shack settlement this week and for the umpteenth time, count the number of shacks and residents as part of pre-planning for houses and service delivery.

Meanwhile, the municipality's latest integrated development plan (IDP) reflects a line item in the budget allocating R27.3 million for bulk water, sewerage and roadworks for new housing projects in Seaview. This line item has been in the IDP for several years.

"If you see an IDP, there is always a Seaview housing project, year after year. But where is that money going to? This is the story of our lives. We are sick and tired of this suffering. We have had enough. We have heard promises and have seen annual budgets come and go with no benefit to us in Zweledinga ... Under Covid-19, our suffering is getting even worse," Barends concluded.