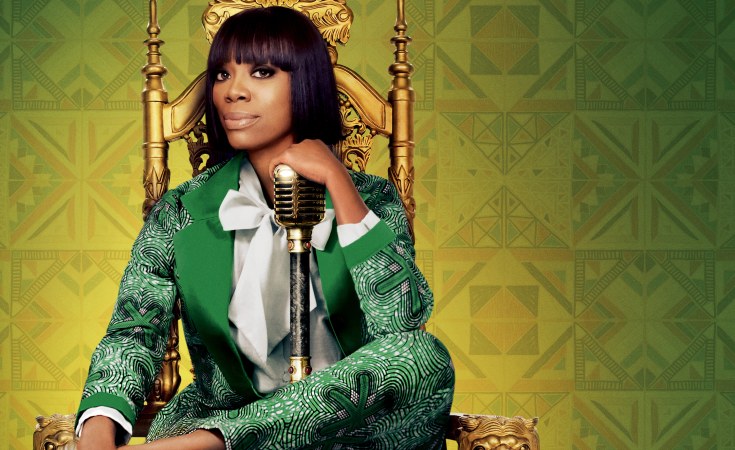 - Momma, I Made It!, the first HBO comedy special from Yvonne Orji, is now on Showmax.

Both celebrating and poking fun at her strict formative Nigerian-American upbringing, Orji shares her unique journey from pre-med to comedy, talks about parental pressures to get married, and takes us along to Lagos to meet her family and friends.

Orji is best known as Molly on Insecure, a role that recently earned her fourth Black Reel nomination in a row. For Insecure fans, it may come as a surprise to discover that Orji is first and foremost a stand-up comedian, but she's okay with that. "I love being underestimated," she told  Washington Post. "I love that people get
more than they expected at the end of the day."

It's hardly news to her fellow comedians though. She's killed in clubs from LA to New York, and opened for Chris Rock during his 2018 Tamborine tour.

Orji's path to comedy was a textbook case of destiny calling. From birth, she explains, it was understood that she would become a doctor, and she did, in fact, complete her bachelor's degree in sociology and a master's in public health. But she believes God had other plans for her.

While studying for her master's, Orji entered the Miss Nigeria in America pageant, not realising she would need a talent for the contest.

"When you're a child of immigrants," she says in HBO's Backstories [2], "you're not allowed to have talents. Your only talent is just to get straight A's. So, I was like, 'God, I need a lifeline,' and, loud as day, I heard the voice of God say, 'Do comedy.'"

Lucky for us, she did. In 2015 she moved to New York to pursue comedy and acting, and started doing stand-up the following year. When the role of Molly came along, she landed the part without an agent or any real acting experience.

She's since appeared in the box office hit Night School, with Kevin Hart and Tiffany Haddish; guest-starred on A Black Lady Sketch Show [3] (co-exec produced by Orji's Insecure co-star Issa Rae); co-hosted the critically acclaimed podcast Jesus and Jollof alongside New York Times bestseller Luvvie Ajayi; and penned the upcoming book Bamboozled by Jesus: How God Tricked Me into the Life of My Dreams.

But, like most of us, the Hollywood star feels she's only as successful as her momma is proud, so it's good to hear that her parents, who were understandably dubious about her new career, have come around.

These days, she says, they're just desperate to get her married off. "My mom leaves me voicemails all the time," Orji quips. "'This is your mother. Time waits for nobody. You are no longer a spring chicken... Happy birthday.'"

Momma, I Made It! was recorded before a live audience in Washington, D.C, during her Lagos to Laurel tour, and gives us an intimate, hilarious look at what being Nigerian-American means to Orji – from her international haggling addiction to having her phone tapped by her parents as a kid, to the fine line, as she puts it, between cursing people out and putting curses on them.

The show is woven together with documentary footage of her most recent trip to Nigeria - her first since Insecure became a global sensation.

Taking to the streets of Lagos and Ihiala, Orji gives us a behind-the-scenes tour of the people, places, and culture that built her sense of humour. Along the way, she introduces us to her proud, loving, highly opinionated parents, her brothers and uncles, comedian Chioma 'Chigul' Omeruah, DJ Obi, and social enterprise and tech exec Tosin Durotoye.

"I wanted to include Nigeria in the show because there's no way I could tell my story without showing you where I came from," she told The New York Times. "People try to compare Lagos to New York City, and I'm like, Lagos is New York multiplied by 25, bruh. It's like Times Square, filled with brown people hustling - entrepreneurs,
movers and shakers, traffic. Plus 20 million more people."

"I think it's important to normalize access to African countries where everything isn't charactered or fictionalized," she says. "It's not Wakanda; it's not x, y, and z. It's like this. You know, we have beautiful homes, and we have dirt roads. We have super successful people and poor people. It wasn't to show a perfect version of what Nigeria is, it was to show a real version of it and to normalize what the people look like and sound like. Because I think that's how we actually make progress."

EW calls Momma, I Made It! "an hour of joy", IndieWire says it's "a rip-roaring standup special", and Fast Company says it's "the laugh the black community needs right now".

In a decidedly un-funny year, it might just be the laugh everyone needs right now.

Watch Yvonne Orji: Momma, I Made It! on Showmax:  https://www.showmax.com/eng/movie/h0lpz7pb-yvonne-orji-momma-i-made-it [5].

Showmax is an internet TV service. What sets Showmax apart is a unique combination of hit African content, first and exclusive international series, the best kids' shows, and live sport. For a single monthly fee, get unlimited access. Start and stop when you want. No ads. Cancel anytime - there's no contract.

Showmax was born in 2015. The service is available throughout sub-Saharan Africa and to selected diaspora markets worldwide. For a free trial, visit [6] www.showmax.com [7].