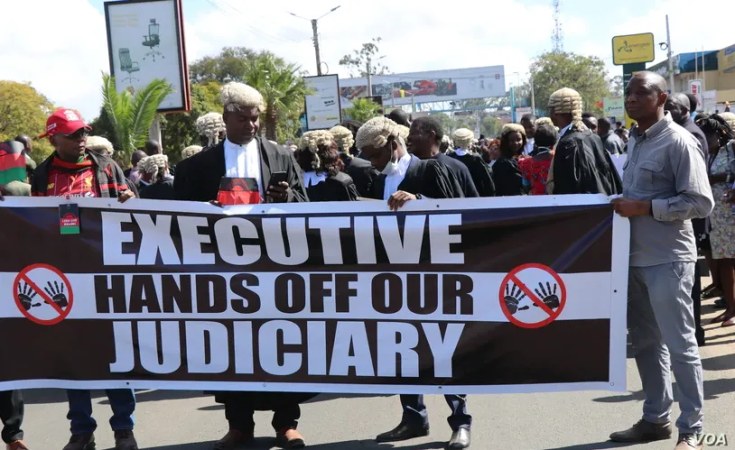 President Lazarus Chakwera on Monday was inaugurated as the 6th President of Malawi and new Commander-in-Chief of Malawi Defence Force, ushering in a "new dawn of government accountability."

In a scaled down ceremony in line with coronavirus (Covid-19) social distancing restrictions at Kamuzu Barracks in the capital Lilongwe, that capped a remarkable rise to power, Chakwera presented himself as the leader of a populist uprising to restore lost greatness.

He was presented with a sword-of-command by Malawi army commander General Peter Namathanga to be officially Commander in Chief.

Chakwera also received his first 21-gun salute and inspected a guard of honour mounted the soldiers who later did their 'Sokole Sokole' soldiers culture to bid farewell to their Commander in Chief after historic event.

In his a forceful inaugural address, Chakwera said as he seeks to be at his best, he will also challenge all Malawians to be at their best.

"I will challenge the leadership of the judiciary to do more to root out the culture of corruption and selective justice that has shipwrecked too many of our lowest courts," said Chakwera.

" I will challenge those who sit in Parliament to act professionally, put away childish ways, and repeal and replace the bad laws that remain on our books," he said.

The President and Commander-in-Chief continued: " I will challenge civil society organization to maintain a culture of robust protest, not just against governance institutions, but against any entity that is on the wrong side of justice."

Chakwera said he will also challenge the country's development partners to respect his administration's vision and plans and to partner with government " in ways that respect our dignity and sovereignty, not ways that undermine it."

He said: "The time of giving free handouts and rewarding noisemakers and hand clappers who are too lazy to work is past. We have a country to build and not a moment to waste. So, let's all get to work."

Chakwera inherits a country deeply divided, politically, regionally and ethnically. With an economy not much better than it was at independence in 1964, with poverty deeply entrenched, with a government steeped in corruption. And with a Covid-19 pandemic spreading.

He defeated immediate past president Peter Mutharika by around 59% to 40% in the 23 June election which was a rerun ordered by the courts of the elections held in May 2019. Mutharika won that election but then Malawi's Constitutional Court annulled it in February 2020 because of extensive vote rigging.

Malawi President Chakwera Working to Trim Executive Powers
Tagged:
Copyright © 2020 Nyasa Times. All rights reserved. Distributed by AllAfrica Global Media (allAfrica.com). To contact the copyright holder directly for corrections — or for permission to republish or make other authorized use of this material, click here.