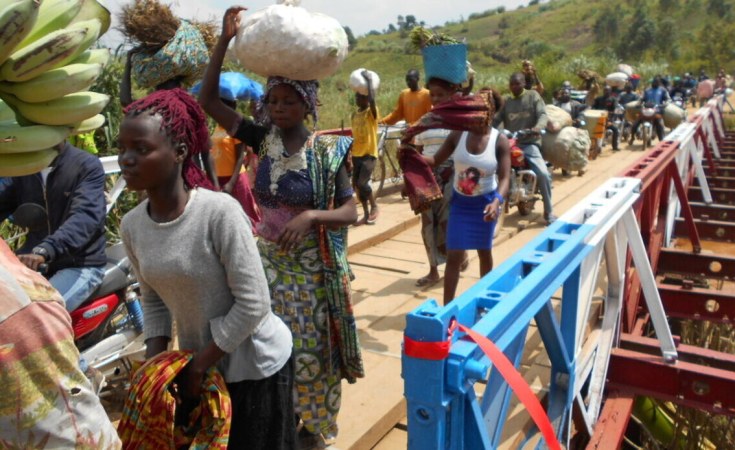 MONUSCO
A vital bridge in Ituri province that was rehabilitated by the UN peacekeeping force, MONUSCO.
United Nations (New York)

It took three weeks for the MONUSCO Nepalese military engineers to refurbish the Kolomani bridge on the road from Bunia to Mongbwalu in the territory of Djugu, Ituri province. The official handover of this work to the provincial authorities took place on June 18, 2020 in Bunia. It cost more than 60 thousand US dollars.

34 meter-long and 4 meter-wide, the bridge, built over twenty years ago and whose advanced state of dilapidation constituted a real danger for its users, will now facilitate the movement of the local people who use it every day on both sides for the purposes of farming and economic activities. It will also allow the DRC and MONUSCO security forces to move more easily during their interventions in the context of civilians’ protection and the fight against armed groups, whose presence is reported ten kilometers away.

Pauline Dheve, 68, is a farmer. She was returning from her farmland near Mwanga on the day the bridge was inaugurated. Since the bridge was refurbished by MONUSCO, in collaboration with the ‘’Office Congolais des Voiries et Drainages’’ OVD/Roads and Drainage Department, she says farmers’ habits have changed.

“Before, we used to run real risks when crossing this bridge, because there were holes everywhere, we  used to jump from one board to another and above all, we would be in a hurry to return to the village before the end of the afternoon so as not to risk our lives by falling into the river… Now it has become easier, we live normally, without no more such stress; the bridge has indeed changed our lives and allows us to better organize ourselves”.

The many motorcycles taxi drivers working on the Bunia-Mwanga road section about ten kilometers away are very happy because their business is going to experience a boom, explains Jean-Faustin Mahiso, 32 years old.

"Before, it was really dangerous to cross this bridge which was in very bad condition. We risked an accident every time we crossed it. The traffic was slowed down, we barely did 4 to 5 crossings a day between Bunia and Mwanga and I hardly earned 15,000 Congolese Francs. Now, I can do at least 10 crossings per day on a motorcycle. I am happy because I will increase my income, at least 40,000 Congolese francs per day of revenue.’’

The provincial Minister of Planning who received the work thanked MONUSCO for this support which will benefit everyone.

The Mayor of Shari Municipality Faustin Agenonga who hosted the handover ceremony, highlighted the importance of this work at the economic and security levels. "This bridge has a great economic impact for the City, because all the farming products are evacuated through this road section which supplies all our central and municipal markets", he said, further indicating, “in the context of the protection of civilians, pedestrian and motorized interventions by Security Forces will safely be conducted with the help of this bridge; so, it is of capital importance for the protection of our population, which explains why MONUSCO did not hesitate to help rehabilitate it ".

Since the closure of the National Route 27 due to insecurity, supply to the whole city of Bunia was provided through this road section which is of paramount importance for the city and the survival of the Province, concluded Faustin Agenonga.

Scores of Civilians Killed in DR Congo Violence
Tagged:
Copyright © 2020 United Nations. All rights reserved. Distributed by AllAfrica Global Media (allAfrica.com). To contact the copyright holder directly for corrections — or for permission to republish or make other authorized use of this material, click here.