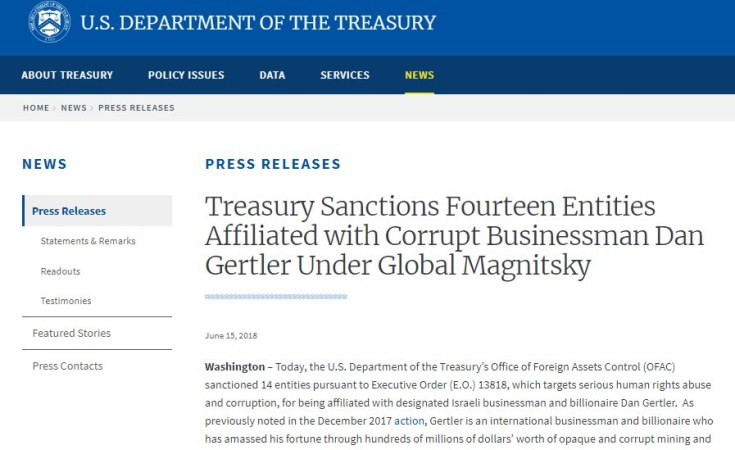 Two non-governmental organisations that ran an investigation into Israeli businessman Dan Gertler say they have been targeted by a "vexatious" lawsuit in France. The joint investigation claimed mining magnate Gertler appeared to avoid US sanctions for "corrupt mining and oil deals" in the Democratic Republic of Congo by using a suspected money laundering network.

Global Witness and the Platform to Protect Whistleblowers in Africa (PPLAAF) said they condemn a criminal complaint filed against them in France by Afriland First Bank, a Cameroonian financial institution named in the Undermining Sanctions investigation.

"For two of the principal subjects of our report to threaten or file criminal complaints against PPLAAF and Global Witness for our investigation into possible sanctions evasion is beyond parody," Henri Thulliez, director of PPLAAF, said in a statement.

Dan Gertler, who is close to former Congolese president Joseph Kabila, was accused by the two NGOs of having created a number of shell companies so that he could continue to acquire Congolese mining permits at a low price.

The report points the finger at the Congolese subsidiary of Afriland bank, set up in 2006, for accepting tens of millions of US dollars in cash through accounts in the names of people close to Gertler.

Eric Moutet, a lawyer acting for Gertler as well as Afriland bank, told RFI that the documents in question used in the investigation are fraudulent.

"A complaint has been filed in Paris, France against Global Witness and PPLAAF about the manner in which the evidence was gathered in this case," Moutet told RFI's Sonia Rolley, saying documents used in the investigation were stolen.

"We have quite a bit of evidence to suggest that the stolen files have been tampered with," said Moutet. "So an investigation will be opened - it is absolutely necessary to shed light on the way in which these NGOs work."

Billionaire businessman Gertler was hit by US sanctions in December 2017, accused by the US Treasury of having "amassed his fortune through hundreds of millions of dollars' worth of opaque and corrupt mining and oil deals in the Democratic Republic of the Congo (DRC)."

US authorities said Gertler used his friendship with Kabila to act as a middleman for mining asset sales in the DRC, and purchased Congolese assets at knockdown prices before flipping them, selling them back to the government in Kinshasa at a premium.

The report by Global Witness, a London-based NGO working on corruption, and PPLAAF, an organisation that supports whistleblowers, explained how Gertler allegedly circumvents US sanctions.

Gertler began creating a holding company and dozens of other companies in October 2017, a few weeks before the official announcement of US sanctions, the report said.

The names of people close to Gertler were used for these companies, enabling him to continue doing business in the DRC despite the sanctions, according to the NGOs. In fact, one of the companies signed a contract with Gecamines, a company managed by the Congolese state, just before Kabila stepped down as president.

PLAAFF and Global Witness, supported by a number of investigative journalists, discovered a network of companies, many based in countries considered as tax havens or secrecy jurisdictions, others domiciled in Hong Kong, Switzerland and the Czech Republic.

Lots of transactions passed through the Congolese subsidiary of Afriland bank, effectively laundering millions of dollars in cash, according to the investigation.

The explosive revelations are unlikely to help Gertler and his business partners, such as Glencore, which is already facing judicial proceedings in Switzerland on suspicion of corruption in the DRC.

The two NGOs are calling on the Congolese government to seize or freeze all property belonging to Gertler, and want international mining companies to stop doing business with him.

Gertler's lawyer Moutet said his client had not sought to avoid US sanctions, pointing out that Global Witness and PPLAAF have not formally accused his client of any crime. 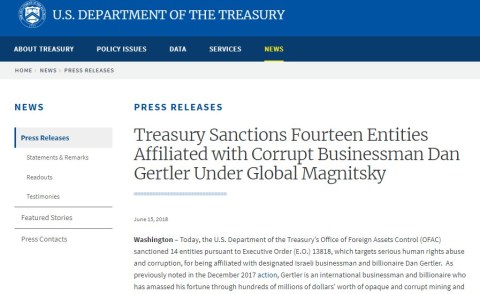 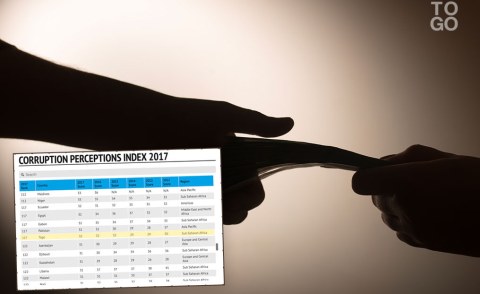 U.S. Re-instates Sanctions on Mining Magnate With DR Congo Ties
Tagged:
Copyright © 2020 Radio France Internationale. All rights reserved. Distributed by AllAfrica Global Media (allAfrica.com). To contact the copyright holder directly for corrections — or for permission to republish or make other authorized use of this material, click here.