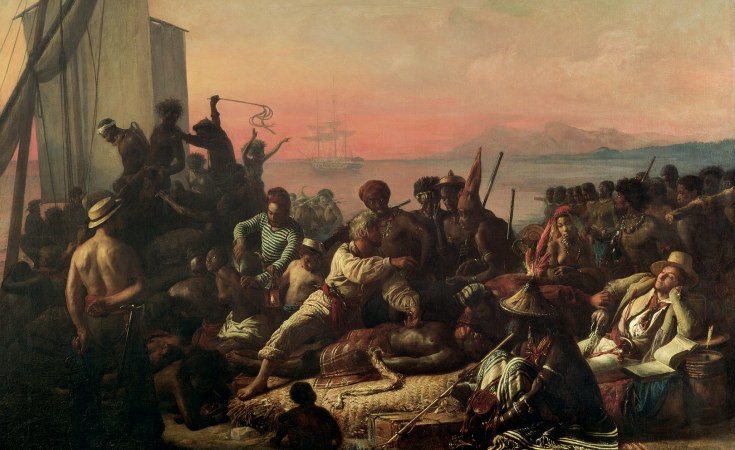 To commemorate African soldiers who fought to free France during World War II, the French ministry of defense has prepared a report on 100 Africans cited for outstanding service during the war. The report will be presented to mayors around the country who are also being encouraged to use it when re-naming streets and public spaces

"Naming streets, squares and schools named after African fighters will ensure that these unrecognized soldiers do not remain unknown soldiers," wrote Geneviève Darrieussecq, France's junior defense minister in the preface of the report.

The report indicates that some 100,000 North Africans as well as 70,000 sub-Saharan Africans fought in May and June 1940, before France fell to the Nazis on 25 June 1940, acknowledging that they fought in some of the most violent battles.

"Algerian and Moroccan spahis [light calvary regiments] were sacrificed in La Horgne, Algerian soldiers in Lille, Tunisian infantry in Eure-et-Loir, Moroccan and Senegalese infantry in the Somme, Oise and Marne," the report said.

Some men in the French African colonies volunteered after France was invaded by Nazi Germany in 1940, while others were conscripted. More than 400,000 African soldiers took part in the Allied offensive in the south of France in August 1944 for the liberation of Toulon and Marseille.

"By mixing their blood with our land, they paid a heavy price in the fight against Nazism," said Darrieussecq, during the presentation of the report last week.

They "died for France, died for our ideals, these fighters deserve the full recognition of the nation," she added.

100 from the African continent

The list of 100 soldiers is divided into three parts by the researchers who drafted the report: Africans who fought for France, a list of Senegalese soldiers who fought at the battle of Chasselay in France, and third, a special category for "Companions of Liberation"--those who helped liberate France under the Nazi German occupation.

Some died on the battlefields in North Africa or in France; others were wounded and died of tuberculosis in hospitals; others survived but were not recognized.

A number of these top 100 soldiers are already well-known in their own countries and some have been decorated and recognized by France, but many have fallen into the shadows, their names forgotten by history. Here are a few from the list of African combatants:

Father and son team Charles and Jean-Baptiste N'Tchoréré are well known in their native Gabon--the highly decorated elder volunteered in September 1939, commanding the 5th company, 2nd battalion of the 53rd Senegalese mixed colonial infantry regiment in the Somme. Although repelling General Irwin Rommel's 7th Panzer division for days, he and his men were outnumbered, out of ammunition and were forced to surrender.

The Germans began to separate the European prisoners of war (POW) from the African POWs. N'Tchoréré protested, invoking the Geneva Convention, and was shot in the neck on 7 June 1940. He argued that soldiers of the same rank should be grouped together, regardless of origin.

"The other black soldiers captured with him were massacred a few days later with other prisoners of African origin," according to the report.

N'Tchoréré's son Jean-Baptiste, a corporal in the 2nd regiment, died in the town of Airaines, hit by a German bullet only 30 kilometres from his father on the same day. The town of Airaines already has a street and memorial in their names.

A number of African soldiers on this list were captured by the Nazis, but escaped, and went on to fight with the French Forces of the Interior (FFI), the name of the resistance during the later part of the war. Diana Idrissa, originally from Niafunké, Mali, was part of the Senegalese Tirailleurs infantry when he was captured in the Ardennes in 1940.

He escaped and joined the FFI in 1944. "He was killed on 29 August 1944 while launching an attack on a German armored vehicle after having fired all the cartridges from his magazine," according to the citation issued by the FFI after his death.

"With exceptional bravery, with a machine gun, he attacked the enemy alone. By donating his life saved the lives of his comrades," it added. He was decorated posthumously the War Cross with the Silver Star.

Others ultimately sacrificed their lives, even if they did not die on the battlefield. Sei Kone, originally from Helona, Bayla province of Guinea, joined the artillery battalion in 1932, and fought in Alsace, during the winter campaign in November 1944. Although under heavy fire during a particularly brutal winter, he stayed on the line until his mission was completed. As a result, his feet froze and had to be amputated.

Kone was awarded the military medal with the War Cross in 1946; he was repatriated in 1947 and died in a military hospital in Conakry in 1948.

Other soldiers placed on the list for their valor unfortunately have disappeared from view after the war, their contributions forgotten.Volunteering in 1935, Kandjina, from Mogombo, Chad, was in a number of Tiralleur regiments, including the Senegalese Tiralleurs. He fought in North Africa, France and Italy. In 1943, he moved to the 1st medical battalion as corporal.

"During the French campaign, he was seriously injured on 8 October 1944 in Eboulet when he went to rescue a wounded man under enemy fire, thus giving a remarkable example of his disregard for danger and his dedication and sacrifice," which was noted when he was given the War Cross with Silver Star in 1944. He continued in the military after WWII, but the report is unaware of when or where he died.

Born in Antananarivo, Madagascar, Norbert Rakotomanga was mobilized in 1939 with the Regiment of Colonial Artillery of the Levant (RACL) and fought alongside the British army against the Afrikakorps in the Western Desert, including El Himeimat and the beginning of the second battle of El-Alamein, which changed the course of the war in North Africa.

He was awarded the War Cross, army corps in December 1942, with this citation: As a gunner, he "showed on 28 October 1942, courage at the position of Deir-El-Hima. Under a tight and precise bombardment of large caliber artillery, he continued his work with a lot of spirit giving an excellent example to his Malagasy comrades," according to the report.

Rakotamanga fought in Tunisia, and Italy, and was promoted to marshal before he was "killed by shrapnel from enemy shells" at Frotey-les-Lure, France on 4 September 1944.

Recognition of some, not others

This recognition is yet another step towards understanding the big contribution made by African soldiers towards French liberation during WWII. Although many ultimately sacrificed their lives for France, African soldiers were not treated nor paid the same as French troops.

Their treatment after serving during WWII also illustrated the lack of equality as African soldiers were demobilized and sent back to West Africa. In December 1944, between 35 and 70 Senegalese infantrymen, depending on the source, were shot and killed by French Army troops in Thiaroye, a demobilization camp. Many were unarmed. They were protesting their poor benefits after serving the French state.

Although former French President Francois Hollande recognized the killings as a "bloody repression" in 2012, little has been done to rectify the situation.

One man has called on French President Emmanuel Macron for justice. M'Bap Senghor was a Senegalese soldier who enlisted in 1939 to fight for France. Captured by the Germans, he became a POW for four years before being repatriated to Senegal, where he was killed in Thiaroye by French troops.

Senghor's son, Biram Senghor, wrote an open letter to Macron in 2018, published in Le Monde newspaper, and in 2019, published in Les Obs, a French magazine, calling for the French state to exhume his father's body, and to change his status from deserter to "Died for France".

France's junior Defense Minister Darrieussecq said at the release of the report that she is counting on senators, mayors, and municipal councils to consider re-naming public spaces in honour of the Africans who fought for France during WWII.