South Africa: Over 400 Doctors to Assist With Disability Grant Applications

The South African Social Security Agency (SASSA) has appointed 465 doctors around the country to assist with the assessment of grant applications by people with disabilities.

Social Development Minister Lindiwe Zulu made the announcement during a media briefing at the Union Buildings on Monday on government's further plans to combat the spread of COVID-19 in South Africa.

Zulu said priority is being given to disabled people, who were assessed prior to lockdown, but did not complete the administrative process, as well as those who were booked for assessments, which could not take place during Levels 4 and 5 of the lockdown.

"New applicants will be assisted at the SASSA offices on an appointment basis and subject to the availability of resources to complete medical assessments, which are a legislated prerequisite to an application for a disability or care dependency grant.

"In addition, I am considering a further extension to the period for which temporary disability grants will be paid in an effort to address the concerns of a very vulnerable sector of our society. Further announcements in this regard will be made shortly," Zulu said.

Zulu said the relevant departments of government have been instructed to mobilise and coordinate their resources and programmes towards invoking aspects of the National Drug Master Plan, as well as the Gender Based Violence and Femicide Master Plan.

This follows the announcement by President Cyril Ramaphosa on the immediate reinstatement of the ban of the sale of alcohol.

"The Department of Social Development will urgently invoke its programmatic responses as part of a government-wide response that is planned and deployed through the Provjocs, Natjoints, inter-ministerial committees (IMCs) and National Coronavirus Coordinating Council (NCCC).

"Invoking these COVID-19 responsive measures will immediately ensure, among others, the deepening of efforts to protect women during this period," Zulu said.

As it has been demonstrated, the Minister said, ban of the sale of alcohol will contribute towards freeing up the much needed medical capabilities and resources within medical facilities.

With regard to GBV and femicide (GBVF), the Minister announced that the department has increased the capacity of the GBV Command Centre through the recruitment of social work interns from the Health and Welfare Sector Education and Training Authority (HWSETA) and National Economic Development and Labour Council (Nedlac).

She said the officials will be deployed to the provincial departments, the National Department of Social Development office and the GBV Command Centre.

"We have also recruited an additional 1 809 social workers on a six-month contract to assist with the provision of psychosocial care and support to vulnerable groups, families and communities," Zulu said.

Meanwhile, Zulu announced that the department has developed the Victim Support Services Policy and Bill, which have been approved by Cabinet.

"This legislative framework will provide guidance on how support services may be provided to victims of violent crimes. The Bill has been sent for printing and will be published for public comment on 17 July 2020," Zulu said. 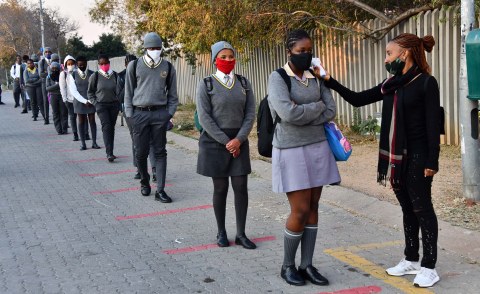 South Africa to Get U.S.$4.3 Billion in Covid-19 Support From IMF
Tagged:
Copyright © 2020 SAnews.gov.za. All rights reserved. Distributed by AllAfrica Global Media (allAfrica.com). To contact the copyright holder directly for corrections — or for permission to republish or make other authorized use of this material, click here.