The Central Bank of Nigeria, CBN, has issued guidelines on the Global Standing Instruction, GSI, which enables banks to seize loan defaulters' money in other banks. The apex bank said the GIS guideline, obtained, yesterday, was to enhance loan recovery in the banking sector.

It said: "The GIS shall serve as the last resort by a creditor bank without recourse to the borrower to recover past due obligations principal and accrued interest only, excluding any penal charges from a defaulting borrower through a direct set-off from deposit/investments held in the borrower's qualifying bank accounts with participating bank accounts."

The objectives of the GSI, CBN said, were to facilitate an improved credit repayment culture; reduce Non-Performing Loans in the banking industry; and watch-list consistent loan defaulters.

The bank said joint accounts would also be subjected to the GSI.

It said all banks, the Nigeria Inter-Bank Settlement System (NIBSS) and the apex bank would be expected to work together for successful implementation of the guidelines.

CBN said that all accounts of borrowers must be linked to their Bank's Verification Number, BVN, adding that failure to do so would attract such accounts being watch-listed when discovered.

According to the guidelines, all banks must execute the GSI Mandate Agreement with the NIBSS and ensure that all qualifying accounts remain visible to NIBSS on the Industry Customer Accounts database or by any other service created or provisioned for this purpose.

Each bank must honour all balance inquiry and debit advice received from NIBSS for GSI Trigger in accordance with master agreement including GSI recall instructions.

The guideline makes it mandatory for each bank chief executive officer "to routinely update the Board of directors on the GSI process as it relates to frequency of use and amounts recovered or released."

Each bank would be expected to also report regularly to the CBN on recoveries made through the GSI, as well as, releases made to other banks.

A violation of the guidelines, when a creditor bank activates GSI mandate in error, especially when it is inconsistent with prudential guidelines, that creditor would be made to take full liability and pay a flat fine of N500m per incident. 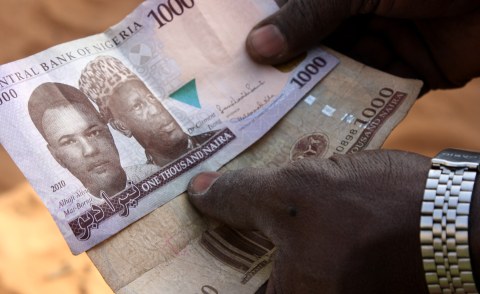 Aid for Nigerian Small Businesses, Households During Covid-19
Tagged:
Copyright © 2020 Vanguard. All rights reserved. Distributed by AllAfrica Global Media (allAfrica.com). To contact the copyright holder directly for corrections — or for permission to republish or make other authorized use of this material, click here.