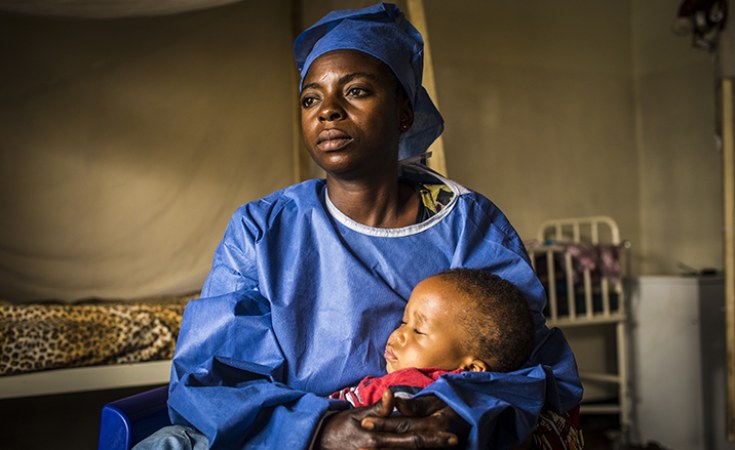 Vincent Tremeau/World Bank
Congolese Ebola survivor Kasomo Kavira rocks a baby in a childcare facility at an Ebola treatment center established in Beni, DRC by the Alliance for International Medical Action (Alima). She lost her nine-year-old son to the virus but became a caregiver, because she had immunity and could hold and comfort children whose mothers were being treated.
allAfrica.com
guest column By Dr. Timothy A. Carey and Dr. Agnes Binagwaho

Kigali — Pandemics come and go. The tragic effect of plague in the Middle Ages reminds us that Covid-19 wasn't the first, and it is clear that it won't be the last.

SARS-CoV-2 travels swiftly and has a complete disregard for the divisions we like to create and defend. But we know that some people are more vulnerable than others – minority groups, the elderly, and those with comorbidities. Generally, though, SARS-CoV-2 doesn't care how wealthy or clever you are or how much education you have had.

While large amounts of resources and tireless efforts are being dedicated to finding a vaccine, there is still no solution on the horizon. There are, however, some discernible patterns of what it means to address this problem effectively.

Where solidarity and compassion are cultivated, the penetration of SARS-CoV-2 is harder. A refusal to invest in cooperative and collaborative solutions is far more dangerous in the long-term than the fragility of our health systems or our own individual physical health. Comprehensive solutions to problems such as Covid-19 require genuine cooperation, both nationally and internationally, between governments and the private sector, and at all levels of the health system.

Solidarity and compassion erect barriers to the virus.

The fight against the pandemic benefits from exceptional scientific collaborations. In January, for example, a team of Chinese and Australian scientists established and made available to the world the genome of the SARS-CoV-2 virus and its genetic map (Kituyi, 2020). Such scientific collaborations are essential to rapidly producing the definitive preventive solution – an effective vaccine.

On its global journey, the virus has taught us that prevention relies on community engagement and has exposed the fragility in our social relationships. Regardless of the size of the group, whether a small rural village, a metropolitan city, or even a collection of nations, where people have found ways to cooperate, results have been much better.

Cooperation among citizens helps vulnerable people in communities to cope with the shock of the lockdown. In Rwanda, where our university is located and where the virus has been suppressed, as well as in countries with high prevalence, such as the United States and South Africa, communities have worked together to raise funds to feed the hungry. Where the tactic has been, instead, to blame others, or to stockpile resources so some are oversupplied while others are empty-handed, the results have been much poorer.

The value of cooperation and collaboration in situations such as pandemics has already been demonstrated. Coltart, Lindsey, Ghinai, Johnson, and Heymann (2017, "(c) Operational Aspects", 1st sentence) report that, in the context of the Ebola pandemic, "one of the most impressive aspects of the outbreak response was the unprecedented levels of international collaboration and cooperation."

As with Ebola, so too with Covid-19, Africa is again at the global forefront of demonstrating the success of collaborative and cooperative responses. African countries are providing examples of working together to reduce viral spread and minimize its impact, despite severe resource constraints.

In situations like these, genuine leaders often emerge, regardless of their appointed position. It is also the case that some appointed or elected leaders fail.

Strong, effective leaders keep themselves well-informed by the best current scientific evidence. Covid-19 has exposed gaps in our knowledge but, for the most part, efforts from fields such as implementation science have taught us what we need to do in situations like these. The problem has been far more an unwillingness to act according to the evidence to stop the spread of the pandemic rather than a lack of information.

Today, some leaders might be described as all tip and no iceberg. True leadership involves the entire iceberg. We need leaders of substance who are clear in their thinking and priorities and ready to tackle the uncertainty a situation like Covid-19 creates. There is no value in competition during times such as this. Humanity is at its very best when cooperation is the order of the day.

Two decades ago medical physicist William T. Powers invoked the moral imperative of caring for others: "The childhood of the human race is far from over, we have a long way to go before most people will understand that what they do for others is just as important to their wellbeing as what they do for themselves."

President Nelson Mandela closed an International Aids Conference in Durban in 2000, saying HIV was one of the greatest threats humankind has faced, and "every word uttered, every gesture made, has to be measured against the effect it can and will have on the lives of millions of real human beings all over this continent and planet".

During a 7 July media briefing on Covid-19, World Health Organization Director-General Tedros Adhanom Ghebreyesus of Ethiopia cited that speech, saying the "words from Madiba echoed through a generation of activists and policy makers alike. I say them today as a message to the world: national unity and global solidarity...are more important than ever before to defeat a common enemy that has taken the world hostage."

Archbishop Emeritus Desmond Tutu explains those instincts as 'Ubuntu' – a recognition that: I am only because you are.  In a foreword to his granddaughter Mungi Ngoma's recent book, he explained Ubuntu as "a concept that, in my community, is one of the most fundamental aspects of living lives of courage, compassion and connection."

Global calamities such as the current situation can reveal the goals and standards that leaders actually prioritize, regardless of what their rhetoric is. Leaders who value the quality of living for all will serve the people they lead better than leaders who are primarily concerned with such things as international impression management or the balance sheet of international loans and foreign debt.

A Message from Vice Chancellor Prof. Agnes Binagwaho Regarding COVID-19