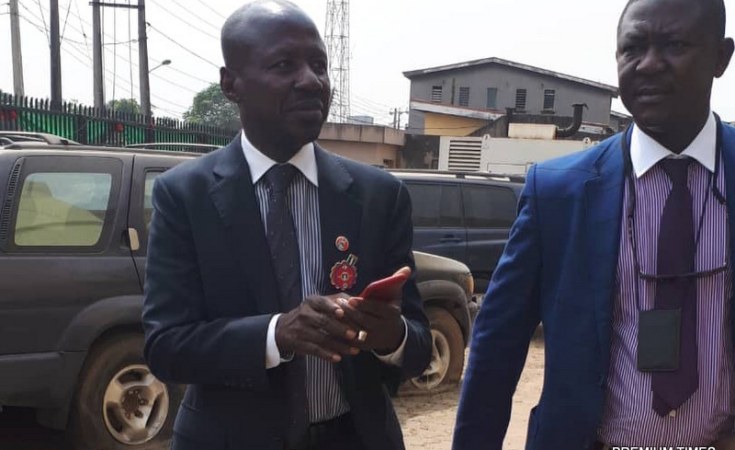 The suspended chairman of the anti-graft agency, EFCC, Ibrahim Magu, has been released.

He was released on Wednesday evening.

A family source who asked not to be named informed this newspaper that Mr Magu arrived at his official residence at about 5 p.m. in the Maitama District of the Nigerian capital.

PREMIUM TIMES  could not immediately confirm if he has concluded his appearance before a presidential panel probing allegations against him.

Mr Magu was arrested last week Monday. He has been appearing before a presidential panel investigating allegations of corruption and insubordination levelled against him by Abubakar Malami, Nigeria’s justice minister.

Mr Magu and Mr Malami have had repeated disagreements on the anti-corruption war and many Nigerians including a member of a presidential committee on anti-corruption, Femi Odekunle, believe Mr Magu’s ordeal is part of a power play with Mr Malami.

After his arrest, a combined team of police officers and operatives of the State Security Services (SSS) searched Mr Magu’s house in Karu, Abuja. Nothing incriminating was found during the search, PREMIUM TIMES learnt.

On July 11, President Buhari confirmed the suspension of Mr Magu and the appointment of Muhammed Umar, the EFCC’s director of operations, as interim head of the anti-graft agency pending the conclusion of Mr Magu’s investigation.

This newspaper also  reported how at least 11 EFCC senior officers were suspended in connection with the probe.

Among those suspended is the EFCC Executive Secretary Olanipekun Olukoyede. Some unit heads at the EFCC headquarters in Abuja were also affected by the suspension, PREMIUM TIMES learnt.

One of the affected officials, who spoke to this newspaper, confirmed the situation.

“I wrote and sent in my handing over note yesterday (Tuesday),” he said, asking not to be named for fear of victimisation.

Our sources said among the unit heads suspended were those of legal unit, economic governance unit and tax fraud unit.

Some international anti-corruption groups last week wrote to President Muhammadu Buhari on what they consider the unfortunate treatment of Mr Magu.

The presidency has, however, said that those who see the investigation as a signal that the fight against corruption is failing, have failed to see the point.

Garba Shehu, President Buhari’s spokesperson, said the investigative panel set up to probe the series of allegations against Mr Magu was in compliance with the law. He also said the suspension of Mr Magu is proof of the government’s commitment to fighting corruption.

Nigeria's Anti-Graft Agency Gets New Boss
Tagged:
Copyright © 2020 Premium Times. All rights reserved. Distributed by AllAfrica Global Media (allAfrica.com). To contact the copyright holder directly for corrections — or for permission to republish or make other authorized use of this material, click here.