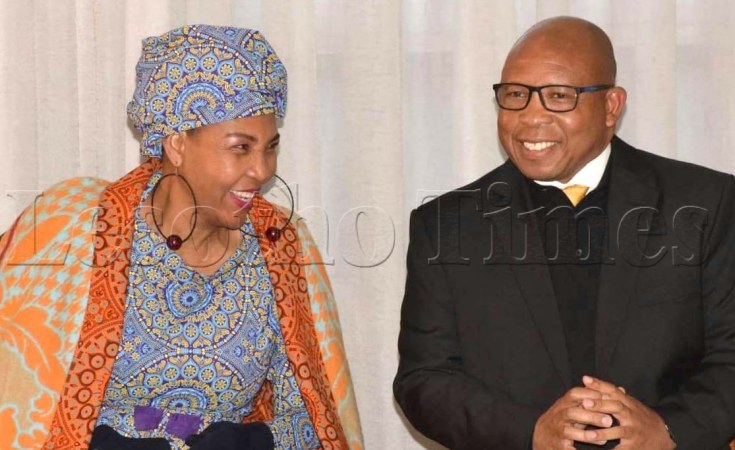 There is just no letting up in the fractious All Basotho Convention (ABC)'s drama. This week the ABC leader and former Prime Minister, Thomas Thabane, savaged new premier Moeketsi Majoro's government for allegedly denying him his terminal benefits and persecuting him by pursuing murder charges against him.

The fire-spitting former premier also tore into his party's national executive committee (NEC) for sidelining him from decision-making even though he remains party leader. He also accused the party and government of orchestrating a witch-hunt to get rid of principal secretaries he had appointed during his short-lived tenure from June 2017 to 19 May 2020.

However, the NEC is fighting Mr Thabane's fire with fire. ABC spokesperson Montoeli Masoetsa accuses Mr Thabane of deliberately absenting himself from crucial NEC meetings. Mr Masoetsa says the ABC constitution stipulates that any NEC member who deliberately misses three consecutive meetings, as Mr Thabane has done, automatically expels themselves from the party. He says although some ABC members are clamouring for Mr Thabane's formal expulsion, the former premier's fate was "not a priority at the moment".

Mr Thabane was forced to step down by his own party on 19 May 2020. The ABC's NEC views the veteran politician as a liability after he was named by police as a suspect in the 14 June 2017 murder of his ex-wife, Lipolelo. His current wife, 'Maesaiah faces the same charges and is out on M10 000 bail.

It had been expected that Mr Thabane would appear in court on Tuesday but that did not happen. Mr Thabane had been expected to finally appear alongside his wife on Tuesday but that did not happen. Deputy Police Commissioner (DCP) Paseka Mokete, yesterday said they were only tying up loose ends before taking Mr Thabane to court. He said they had delayed to ensure that when they finally bring him to court, the former premier would not avoid trial on any technicality. (See story on page 5).

A day before his expected court appearance, Mr Thabane held a press conference to speak on his current situation after he was forced to give up power on 19 May 2020.

There were no initial signs of the storming address that was to come when Mr Thabane stepped out into the yard of the Hillsview residence as the light began to fade on a chilly wintry Monday evening.

Instead, the octogenarian appeared his usual jovial self as he cracked jokes.

Apart from his usual trusted allies like his son, Potlako, and ABC MPs Chalane Phori and Samonyane Ntsekele, the ceremony was also attended by opposition Alliance of Democrats (AD) lawmakers, Thuso Litjobo, Tlohelang Aumane, Tsukutlane Au, Mokoto Hloaele and Mokherane Tsatsanyane. The AD officials also attended last week's ceremony to celebrate 'Maesaiah's return from prison after she was freed on bail having spent about three weeks behind bars after the Court of Appeal had revoked her bail. This and the fact that the Thabane faction held a secret meeting with the AD has fuelled speculation that the former premier and his allies could be considering ditching the ABC for a new political arrangement which includes his former coalition partner.

Resplendent in the green, yellow and red colours of the ABC on Monday, Mr Thabane pointed out the nearby correctional facility and said, "prison is over there".

"They (Maseru Prison) are my neighbours and there are some boys who need to go there," he said before breaking into laughter and without naming the "boys" who must go there.

His supporters joined in as Mr Thabane took his place at the high table draped in three ABC-themed blankets.

From that moment on, the event took on a more serious air as Mr Thabane tore into the new government for allegedly persecuting him.

"Do know that I am going to court tomorrow morning (Tuesday). I am being taken to court by the very same people that I handed over power to. I handed them power to lead the country and the party. They had to unite and grow this party.

"As I am speaking with you just a month after I retired from the office of the prime minister, I have not received my benefits. These gentlemen have not paid me," Mr Thabane said.

Finance Minister Thabo Sophonea later told the Lesotho Times that his office had not received any communication from the prime minister's office advising him to pay Mr Thabane's terminal benefits.

Mr Sophonea also said that processing terminal benefits was not an "overnight affair".

"The office of the prime minister through Ntate (Kemiso) Mosenene and cabinet are best placed to know how far they have gone in processing his retirement benefits. I cannot just pay him without documents from that office advising me to pay him.

"It must also be noted that processing retirement benefits is not an overnight process. It cannot be concluded in a month," Mr Sophonea said.

The Minister in the Prime Minister's Office, Mr Mosenene, was not reachable on his mobile phone for comment. Prime Minister Majoro' spokesperson, Mosito Moqhekoana, said he was yet to establish all the facts of the Thabane issue from his boss.

Mr Thabane also said the new government and the ABC had not heeded his call to deal with deeply entrenched political polarisation in the country. Infighting has continued unabated in the ABC and in the aftermath of Mr Thabane's ouster, two MPs Mokherane Tsatsanyane (Stadium Area constituency) and Sello Mooki (Bobatsi) defected to the AD. Several other MPs have threatened to follow suit in anger over being snubbed for cabinet appointments by Dr Majoro.

Mr Thabane also complained he was not being consulted on any issues by his party yet he remained its leader.

"We appointed members of the party to political and professional positions such as principal secretaries and today they are being persecuted and fired from those positions. When I left office, I told the ABC members who assumed the power of leading the government and the party that I guarantee them my support at all times.

"Always remember that power does not last forever. Be honest in your dealings and be aware that there will be traps along the way. What is stopping you from involving me in your plans when I am still alive and announced to the whole world that I will always be there to advise and guide you until such time when I retire as the leader of the ABC?

"I am asking a rhetorical question that I have no answer to and you will probably assist me with an answer to this and many other questions that I have. I appealed to my fellow countrymen who are leading the country today to take these wise words to help them to do the right things and overcome the challenges facing the country such as the deadly Covid-19 pandemic.

"Let us leave behind hatred, jealousy and bitterness and work hard for peace and stability. At the same time, we should be teaching our fellow countrymen and women to respect each other. ABC members should not be seen firing those I worked with because of hatred or political polarisation. Let go of the spirit of revenge," Mr Thabane said.

However, Mr Masoetsa shot back at Mr Thabane, saying he was to blame for snubbing NEC meetings.

"How does he (Mr Thabane) claim that the NEC does not involve him in running the party when he is the one who always tell us to go ahead with meetings every time we extend the invitation?

He said the ABC constitution stipulated that any NEC member who missed three consecutive meetings, as Mr Thabane had done, automatically expelled themselves from the party. Mr Masoetsa has previously said that the ABC would hold a special conference sometime this month to elect Mr Thabane's successor. He however, said the conference would not proceed to allow the party and government to focus on service delivery to the nation. He said although some ABC members were clamouring for Mr Thabane's expulsion, the former premier's fate was "not a priority at the moment".

"There were some ABC members who had already started campaigning for the leadership post but we made a decision that those campaigns must be suspended. Our most pressing priority is to stabilise this government and ensure that it delivers services to the people," Mr Masoetsa said.