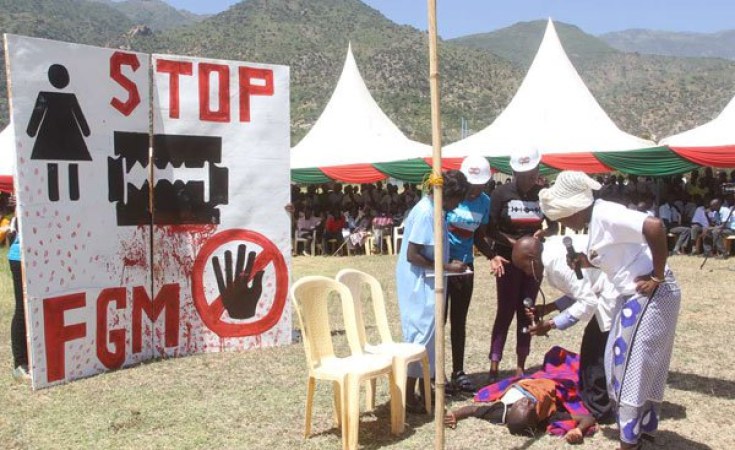 The research conducted in the past six months by Kapenguria Theatre Group - a community-based organisation - says the girls are then denied education by being married off by their families.

The group says the number of girls being circumcised drastically went up when the government ordered that schools be closed in March to curb the spread of Covid-19.

The group has stepped up the anti-FGM campaigns by talking to communities and performing songs, dances and plays.

Kapenguria Theatre Group Board chairman Francis Soprin said the prevalence of FGM in the mostly arid county now stands at 74 per cent, almost four times the national figure of 21 per cent.

During a sensitisation campaign in Kapkoris village on Wednesday, Mr Soprin said high illiteracy levels and ignorance among girls and women have jeopardised efforts to wage a successful war on FGM in West Pokot.

"Many cases go unreported. Chiefs fear exposing the culprits because they can lose their jobs for not doing enough to curb the practice," Mr Soprin said.

He asked the government to be pragmatic in fighting the cut, adding that remote villages are the worst hit.

"The government and other stakeholders should join hands in this campaign. State officials should be sent to remote places," he added.

Mr Soprin said thousands of primary and secondary school learners may not go back to school and urged the Education ministry to reconsider the decision to cancel the academic calendar.

"Schools should open early. There will be many circumcision ceremonies as we approach November and December, making the already bad situation dire. The abnormally long holidays are a catastrophe for girls," he said.

He added that FGM takes place secretly at night, while other families carry it out while singing religious songs to fool the authorities.

Group secretary-general Peter Wafula said many FGM perpetrators are never prosecuted, creating a false impression that the practice is legal.

He added that failure to take such families to court affects the fight against the practice.

Mr Wafula said many victims of the cut do not usually know where to go or who to report to.

"The fight against FGM cannot be won if women know nothing on their rights. The high illiteracy levels in West Pokot make this campaign even more difficult," he said.

He said the organisation has launched advocacy programmes through theatre and song on social media "since teenagers are at home and like using WhatApp, Twitter and others".

"We record plays, skits and songs on CDs and take them to women and girls in villages. The biggest problem facing girls is lack of exposure. It makes them accept anything that comes their way," Mr Wafula said. "Many people still don't know that we are using digital methods in the anti-FGM drive."

Ms Sabina Grace, an actor with Kapenguria Theatre Group, asked the community to discard the practices and ensure girls remain in school.

Mr Soprin said the community and the country should protect the lives of girls and women by embracing laws meant to fight FGM.

"Studies show that FGM can lead to heavy bleeding, death and birth complications. Early and forced marriages should be a thing of the past. Let us use young people to spread this message. The elderly people are not ready for changes," Mr Soprin said.