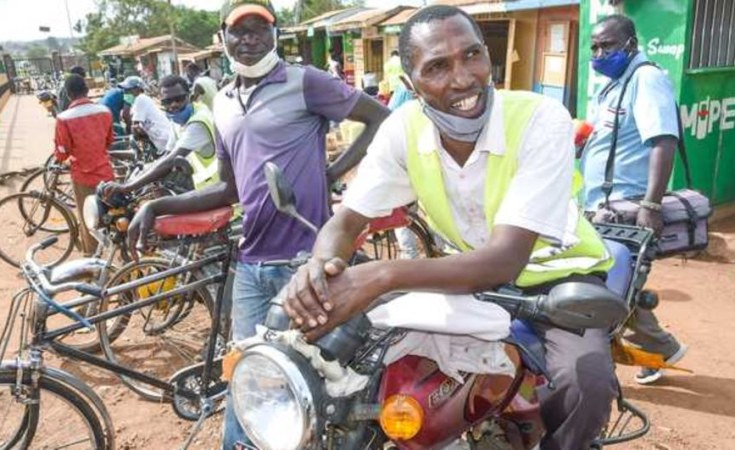 Jared Nyataya/Daily Nation
Boda boda operators in Malaba. The border town in Busia County has recorded many coronavirus cases in the recent past.
The Nation (Nairobi)
By Stella Cherono

The decision on whether to impose a lockdown in some regions following the surge in the number of Covid-19 cases will depend on people's behaviour and not counties' preparedness.

Health Cabinet Secretary Mutahi Kagwe said Thursday that most counties are better equipped to deal with the pandemic than the entire country was before the first case was reported in the country.

The CS was reacting to assertions by Council of Governors Chairman Wycliffe Oparanya that restrictions on movement may be reintroduced in some counties because they are not prepared to tackle an upsurge in cases after President Uhuru Kenyatta lifted movement restrictions on July 6.

The CS said the surge in the Covid-19 cases was expected after the restrictions were eased and that the decision was reached after several considerations.

"The easing of the restrictions was not intentionally aimed at increasing the number of cases, but it is because we believed that Kenyans had reached a level of knowledge and preparedness to enable them to take care of themselves," the CS said.

He reiterated the need for Kenyans to take personal responsibility to protect themselves and their families by observing the measures put in place by the government and the World Health Organization (WHO), saying that freedom comes with responsibility.

He spoke in Nakuru where he had travelled to assess the county's level of preparedness and to launch the Primary Healthcare Strategic Framework and Community Health Policy.

After visiting the Nakuru Level Six Hospital, where the isolation centres are located and Moi Primary School, where the training of 551 front-line healthcare workers and volunteers is taking place, the CS said he was impressed.

The county, he said, had attained and surpassed the 300-bed capacity target the President gave every county and that it intended to increase the capacity to 652 in the next six weeks.

In his daily national update on the pandemic, Mr Kagwe announced eight deaths from Covid-19 in 24 hours and that, out of the 3,895 tests that had been conducted, 421 turned positive, bringing the national tally to 11,673. The total number of tests that have been carried out now stands at 230,096.

Out of the cases that turned positive on Thursday, the CS said, 409 are Kenyans while 12 are foreigners. A majority of them (297) were male. He blamed the high number of males on carelessness, saying that most of those who fail to observe social distancing and to wear masks are men.

Nairobi continues to record the highest number of cases, with the total tally now standing at 6,491, followed by Mombasa with 1,783 and Kiambu with 640.

He warned Nakuru residents that the pandemic could deal a major blow to the social and economic gains the county had made. The county is ranked ninth in the number of positive cases, with 155 people having been infected.

"Over the past 24 hours, some 570 patients have recovered from the disease. Out of these, 512 were on home-based care, while 58 are from various facilities," the CS said. The total number of recoveries has been pushed to 3,638.

Mr Kagwe awarded five employees for their work in the fight against the pandemic, among them paediatrician Ithondeka Angeline, epidemiologist Jacob Rotich, nursing officer Sarah Mosop, clinical and influenza surveillance officer Jonathan Orinda and hospital driver Joseph Mbuthia, whom he said has been delivering samples for testing in Nairobi on a daily basis.

Governor Lee Kinyanjui said transmission of the virus is at community level.

"Nakuru is a high-risk county due its high population, central location and is along the Northern Corridor used by long-distance trucks and travellers to Western, Nyanza and neighbouring countries," he said.

He said the Inland Container Depot in Maai Mahiu had led to an increase in cases due to the high number of long-distance trucks that stop to collect cargo.

The county, he said, has adopted home-based isolation protocols rolled out by the Health ministry on June 10 and has 25 patients under home-based care.