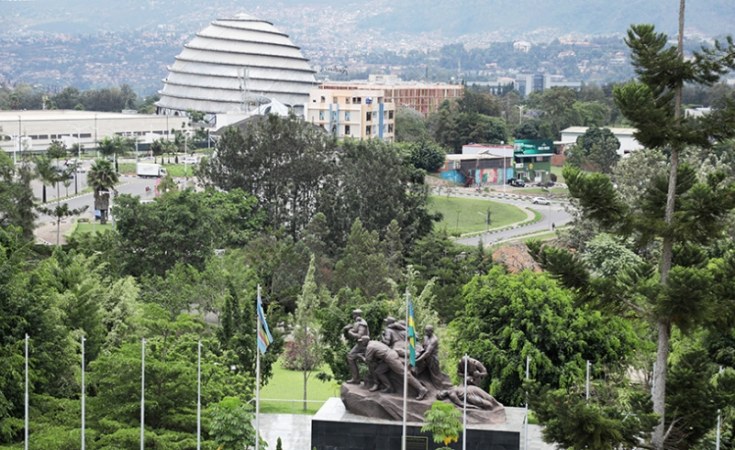 In 1995, Ghana announced that it would achieve a middle-income status similar to Singapore by 2020. Rwanda too, says it aspires to be as successful as the Asian country. Results between the two African countries differ.

Nearly 25 years ago, Jerry Rawlings, the then president of Ghana, presented a document to parliament. In it, he outlined an aggressive long-term plan that would improve his country's human and economic growth, rural and urban development, as well as overhaul Ghana's infrastructure. The aim was to follow Singapore's example. The document was called Vision 2020.

According to the Rawling's vision, Singapore had transformed itself from a third world country in the 1960's to a middle-income country in a short time.

However, whereas the International Monetary Fund (IMF) lists Singapore as the third richest country per capita on the planet, Ghana is languishing down at number 126. The vision appears to have badly stalled.

"We are in 2020, the time that we wanted to achieve a level of growth that is comparable to Singapore, we have worse figures," Ziblim Alhassan, a Ghanaian policy analyst, told DW.

In the 1990s, Singapore under the leadership of Lee Kuan Yew had become a global financial, trading and industrial center. Its free market and economic growth over the years inspired Ghana to imitate. Today, Singapore is considered one of the wealthiest and most developed nation in the world.

Ghanaians like Ricky Kasisi, who previously worked in Singapore, are aware of Singapore's economic might. "Very clean streets to the carefully marked pavements, pedestrian walkways, bicycle lanes, the wonderful high rise buildings and the pride that they exude in the beauty and progress of their country. That cannot be missed," Kasisi told DW.

According to Alhaji Sulemana Alhassan, a former government policy analyst, who was present when the Vision 2020 was proposed, the Ghanaian government's goal was too ambitious. "Singapore had developed so much that they had political stability and a growing economy," Sulemana Alhassan told DW.

"We felt that if Ghana pursued the path of political stability and economic progress, we could also achieve that status like Singapore."

The picture in Ghana is decidedly mixed. While the west African nation has managed to slash its poverty rate in the past decades, the increased standard of living is not evenly distributed. Policy analyst Ziblim Alhassan said the number of Ghanaians living in extreme poverty has increased.

The 2017 Ibrahim Index of African Governance shows that although Ghana remains among the 10 top-scoring countries on the continent in terms of democracy and good governance, it is also among the 10 most deteriorated countries economically over the last decade.

For Sulemana Alhassan, the main problem is that successive governments kept changing development strategies before anything had a chance to work. When Rawlings retired in 2001, and handed over the reins of power, his successor, John Kuffour, dealt his plans a severe blow. Kuffour chose to focus on food production and job creation at the expense of other growth sectors envisioned by Rawlings.

"In the year 2000, there was a change of government and they [the new regime] also came with their vision," Sulemana Alhassan said. "Some parts of our development [agenda] were implemented, so if they had been stable, we would have pursued and succeeded. But because we had an interruption of governance, many policies were dropped."

Rwanda is the only country in sub-Saharan Africa that has come close to emulate Singapore's rags-to-riches story, albeit not in the same spectacular style.

The small landlocked central African nation boasts years of strong economic growth, pristine streets in the capital Kigali, and donor praise for fighting corruption. "Beating the odds is a challenge we Rwandans and Singaporeans share,"Rwanda's President Paul Kagame told Singapore's Prime Minister Lee Hsein Loong, the son of Lee Kuan Yew, on a visit to the Asian state in 2008. Kagame referred to Singapore as "an inspiration for us in Rwanda," Reuters reported then.

However, critics of President Paul Kagame's government argue that economic gains have come at the cost of political freedoms like a clampdown on dissenting views and media rights. Kagame has been president of Rwanda since 2000. On the contrary, Ghana has peacefully exchanged power in four presidencies.

Singapore might now be affluent and have a robust health care system, but its government too is relatively repressive, limiting critical speech and peaceful assembly. According to a 2019 Amnesty report on Singapore, activists and human rights defenders were prosecuted for organizing peaceful meetings and criticizing the government.

Maxwell Suuk and Kate Hairsine contributed to this article.