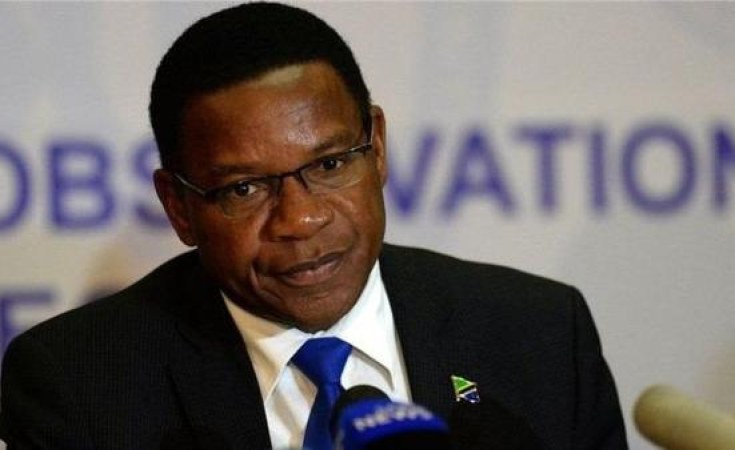 Membe was foreign minister from 2007 to 2015 under the ruling Chama Cha Mapinduzi (CCM) party. This week he announced that he had joined the growing opposition Alliance for Change and Transparency (ACT)-Wazalendo party, and was making himself available to contest its August primary presidential elections.

Membe earlier resigned from the CCM when he failed to secure its approval to compete with Magufuli for the party's nomination. He'd already been fired in February for his growing criticism of the president.

At a video press conference on Wednesday, he slammed Magufuli for 'a continued descent into authoritarianism, infringements of fundamental freedoms enshrined in our constitution, further human rights abuses, increased poverty and decreasing access to quality social services.' He invited Tanzanians to 'choose change: constitutionalism, respect for human rights, economic growth that creates jobs and universal access to basic services.'

At the same press conference ACT-Wazalendo leader Zitto Kabwe cleared a big obstacle to Membe's path to the party's nomination by announcing that he himself wouldn't be contesting it. Kabwe is Tanzania's most prominent opposition leader, known for his outspoken criticism of Magufuli. Kabwe told foreign journalists that his party was already advanced in its negotiations with the other main political parties for an agreement to unite behind a single presidential candidate.

A report by the Institute for Security Studies (ISS), soon to be published, suggests that ACT-Wazalendo recently overtook CHADEMA as the country's main opposition party on the mainland. It's clear that Kabwe and Membe intend to push Membe first as ACT-Wazalendo's presidential candidate and then the candidate of a united opposition.

Membe has solid credentials as a former foreign minister under president Jakaya Kikwete. He also played a prominent regional and international role - including chairing the Commonwealth Ministerial Action Group - in finding peaceful solutions for political crises in Sri Lanka, The Maldives and Fiji.

Nonetheless it will be a tall order for him to unseat Magufuli even as a united opposition candidate. The ISS report, though written before Membe announced his likely entry into the presidential race, doesn't give the opposition much of a chance.

'The CCM is not facing any real electoral threat,' it concludes, adding that: 'The fundamental question of civic freedoms is likely to play second fiddle in the elections. The ruling party loyalists are unlikely to be disturbed by the recent developments that have seen government clamp down on civic space. Instead, they will point to the economic stability and growth as an indicator of an able leader.'

As the ISS report explains, Magufuli presents two faces. He may be becoming an international pariah for his repression of critics and opponents, including opposition political parties, civil society and the media. But he remains popular at home because of his robust campaign against corruption and for ensuring better service delivery. His shakedowns of foreign mining companies which he accused of stealing money from Tanzanians through illicit tax practices have also endeared him to ordinary people.

And Tanzania's economy is doing relatively well, maintaining average annual growth of over 6% during Magufuli's five-year tenure, though the International Monetary Fund has forecast a plunge to 2% this year because of COVID-19. The World Bank recently graduated Tanzania from low-income to lower-middle-income status.

Although different in most ways from his neighbour, Rwandan President Paul Kagame, Magufuli shares a contempt for what both leaders consider the niceties of democracy and human rights in favour of the more tangible benefits of economic growth and improving service delivery.

Asked if he didn't think Magufuli would be too daunting an opponent because of these concrete deliverables, Kabwe said the World Bank had also reported that a net two million Tanzanians had fallen back into poverty during Magufuli's tenure. Foreign direct investment had also declined by 47%. Tourism, which provided Tanzania with one third of its foreign exchange, had been drastically reduced by COVID-19, putting 1.4 million jobs on the line.

ACT-Wazalendo would present this reality to voters, to counter what he called the 'hot air' of the government's purported economic achievements, Kabwe said. Apart from the difficulties of convincing an electorate that will probably be more concerned with the bottom line than general human rights, the opposition faces a steeply tilted political playing field.

Like other former liberation movements, the CCM is used to winning, which it has done without fail since independence in 1961. As the ISS report points out, the electoral system is heavily stacked against the opposition, including an electoral commission that's considered partial to the CCM, partly because it's appointed by the president. The law doesn't even allow presidential election results to be challenged in court.

And as Kabwe noted, probably no outside election observer missions would be deployed to Tanzania because of COVID-19. That's particularly worrying as last month the government ordered the Legal and Human Rights Centre (LHRC) to cease its activities under the umbrella of the Tanzania Civil Society Consortium on Election Observation (TACCEO), the largest domestic civil society consortium observing elections in Tanzania. The LHRC acts as TACCEO's secretariat.

Kabwe and Membe were nonetheless confident that their party had devised a strategy to neutralise the bias in the system. This included an army of their own agents who would be present in every one of the country's 60 000 polling stations and every district centre where votes are tallied.

Membe said these agents would text the results from each polling station to counter any effort by the ruling party to rig the results. Kabwe did however acknowledge that the country's draconian 2015 Cybercrimes Act allowed the government to block such transmissions if it wanted. He insisted that his party wouldn't boycott the elections however unfair the conditions, noting that the opposition boycott of the November 2019 local government elections achieved nothing.

Clearly though, the opposition enters this fight with one hand tied behind its back. To beat both a doughty, efficient and ruthless incumbent, and the system, will take something of a miracle.