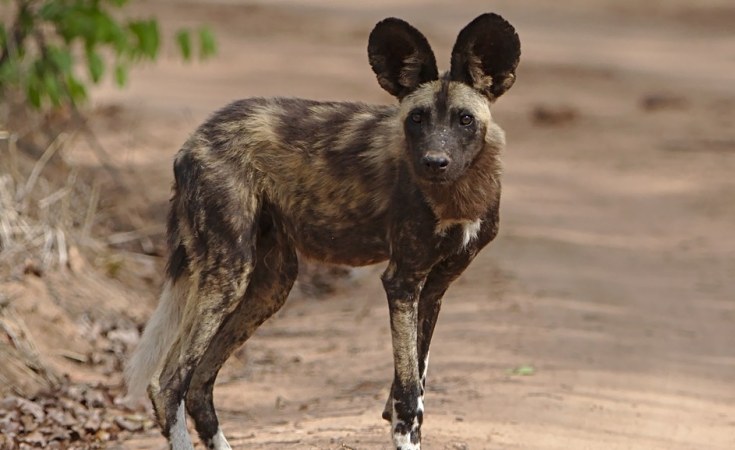 They found fame in the 2018 David Attenborough documentary "Dynasties". But numbers of painted dogs in Zimbabwe's Mana Pools National Park are at their lowest level in 10 years. Predators, poor soils, inbreeding and people with cameras could be among the reasons why.

In 2010 there were around 100 painted dogs, also known as African wild dogs, in Mana Pools, a UNESCO World Heritage Site along the Zambezi River in the north of Zimbabwe. That number has dwindled to as few as 20, according to the Painted Dog Conservation group (PDC).

"Right now the population is really fragile and we don't really understand the reasons why," said Peter Blinston, executive director of PDC, which has a research team stationed in the park.

One big factor may be the soil at Mana Pools: it's hard to dig unlike softer soils in Hwange National Park, where there's also a population of painted dogs.

Here's to a great weekend from the Mpindo pack in Mana Pools. As with the much-loved domestic dog, painted dogs and their pups are gorgeous. We all agree, right🐾🐾❤ #mpindopack #pdc #savethepainteddog #wildlife #conservation Publiée par Painted Dog Conservation sur Vendredi 17 juillet 2020

When painted dogs want to move their dens - as they do when the dens become flea-riddled or when predators like lions and hyenas become too much of a threat - it's much harder in Mana Pools because the dogs can't dig out new ones.

In fact in Mana Pools the dogs typically return to the same dens year after year. In other parts of Zimbabwe, the animals dig new holes each denning season, which typically lasts from June-August.

If the Mana dogs feel absolutely compelled to move, they have to resort to using holes already made by burrowing animals like aardvarks or porcupines.

Evidence of inbreeding has now been accurately recorded in the park for the first time - a likely consequence of the drop in numbers.

"There is much we do not know about the dynamics of rapidly shrinking populations and how that affects their survival and persistence," says Ellie Armstrong, a Stanford University biologist and PhD candidate who, together with other researchers, has been working with PDC to gather genetic data on wild dogs, including those in Mana Pools.

"Our initial results reveal incredibly low genetic diversity and signs of inbreeding. We have also detected parasites and bacterial infections in several individuals," she told RFI.

"It is our hope that we can shed light on some of the driving factors affecting the wild dogs at Mana Pools before they are locally extinct."

Across Africa, painted dog numbers have plummeted from a high of around 500,000 in the early 1900s to just 7,000 now. Zimbabwe's total painted dog population is estimated at just 700, including the Mana Pools population.

A pack of painted dogs was recently relocated there. This was done primarily to prevent the dogs eating the goats of livestock farmers in the Mpindo area, near Hwange National Park but there's also a possibility they could boost the Mana Pools gene pool.

The newcomers have been kept in an acclimatisation pen at Wilderness Safaris for the past 10 months with support from Zimbabwe's national parks authority. The three adults and 16 pups are due to be released in early September.

Falling populations may require a shift in behaviour by those keen on viewing the animals.

"We've seen in the past 10 years dogs move their den, and those have [sometimes] been in instances where there has been a lot of foot traffic from tourists," Blinston said. He could not say "100 percent" whether this was to do with human disturbance or rather harassment from hyenas and lions.

But because the dogs don't move den often, safari operators know where to find them, bringing tourists close. Film crews can also be a threat because of how near they need to be to the animals.

"If [the dogs] are disturbed, they'll move more often. And often pups perish on that move," says Blinston.

Mpindo pack pups in Chikwenya, Mana Pools. The pack is due to be released back into wild soon. The pups are showing all the good signs that they can keep up in the wild now. Support the #KeepJealousMpofuInTheField campaign https://t.co/QKXF8PUZxT.#pups #savethepainteddog pic.twitter.com/ZL2PtjfHwm - Painted Dog Conservation (@PaintedDogPDC) June 18, 2020

Zimbabwe's national parks closed to the public on 30 March as part of a coronavirus lockdown. They have since reopened.

Conservation group the Zambezi Society says painted dog dens should be out of bounds, except for legitimate research, while the pups are still in them.

"This season is different, but in the prior couple of seasons there has been real abuse by certain tour operators," said Richard Maasdorp, the society's strategic director.

"I've tried to bring this to the general tour operators' attention that they're starting to lose the ambience of Mana by crowding in on animals."

The PDC's Blinston says curiosity shown towards the dogs by visitors to the park should be weighed against the animals' well-being.

"If nobody's interested in them their future is even more bleak. So, it's finding that balance - you want people to want to see the dogs, but to also be respectful."